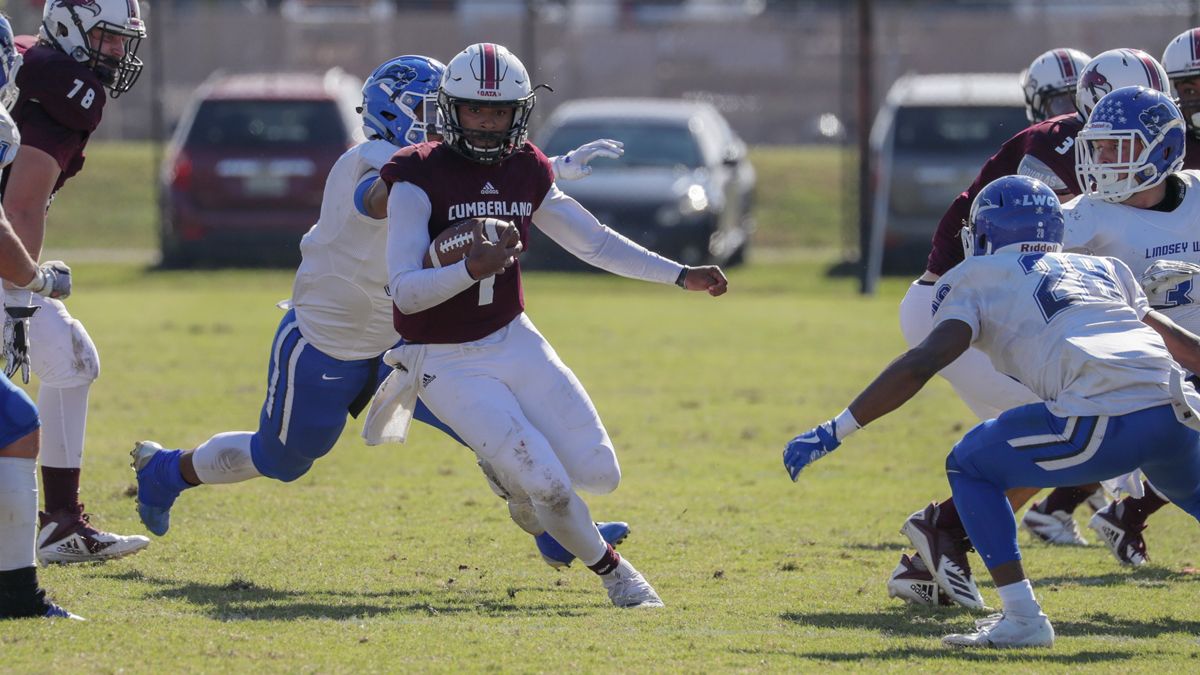 MCKENZIE, Tenn. – Sam Castronova passed for 260 yards and three touchdowns and ran for another TD and third-ranked Bethel University scored the last 49 points in a 56-7 victory over Cumberland in football action in the regular season finale here Saturday at Wildcat Stadium.

Dezmon Huntley’s 30-yard touchdown run tied the game at seven in the first quarter and Kendall Johnson set-up Cumberland near midfield on the team’s next possession, but a fumble by the Phoenix that was returned for a TD put CU in an early hole.

Castronova tossed scoring passes of 40, three and six yards, all in the first half, helping the Wildcats (10-0, 6-0) to a 42-7 halftime advantage. Nolan Chowbay threw a 40-yard touchdown pass in the third quarter for the final Bethel TD.

Huntley finished with 91 rushing yards on 16 carries but tossed two interceptions in his final game of his career. Cumberland posted just 172 yards of total offense in the contest.

Bethel took the first drive of the game 54 yards on six plays, including a 23-yard pass to Davius Prather. Chris Witherspoon’s 17-yard run got the ball inside the 10 and two plays later Castronova weaved his way for the final two yards and a 7-0 Wildcats lead.

Johnson returned the ensuing kickoff 35 yards and Huntley gained 14 yards on CU’s first third down of the game. On another third down Huntley’s pass to the goal line was intercepted by Jaylon Montague, but Bethel was backed up at its own one-yard line.

After a short punt by the Wildcats, the Phoenix drove 44 yards on six plays, with Huntley’s quarterback draw covering the final 30 yards for the touchdown, splitting defenders and carrying two into the end zone from the five, knotting the game at seven with 5:12 left in the opening quarter.

Castronova hit Prather for a 40-yard TD pass on the next Wildcats possession, beating the blitz for the TD pass down the right side for a 14-7 Bethel lead.

On the first play of the following CU drive, Jeremy Beaulieu hit Huntley and Joseph Rushin on a handoff, causing a fumble. The ball was kicked forward and picked up by David Miller, who returned it 45 yards for a touchdown, extending the home team’s advantage to 21-7.

Another long completion to Prather for 66 yards set-up a three-yard TD pass to Devante Jimenez for a 28-7 Bethel lead early in the second period.

Karrheem Darrington’s interception gave the Wildcats the ball near midfield and a 22-yard catch by Derek Smith preceded a 14-yard TD run from De’Ontay Tate.

Terry Tiller collected an interception on the next Bethel possession, returning it 17 yards to the BU39. The Phoenix picked up one first down but Huntley’s fourth-down pass fell incomplete.

The Wildcats moved 78 yards on 10 plays, scoring on the final play of the half. Ayaunta Davis gained 15 yards for a first down and Tate caught a pass for another 12 yards. Castronova’s 29-yard completion to Smith got the ball to the CU6 and two plays later Smith made a six-yard TD catch for a 42-7 Bethel lead at intermission.

The home team posted a 10-play, 79-yard drive to open the third quarter with a 12-yard run by Tate and a 15-yard penalty on CU moving the ball to the Cumberland 36. Tate gained 14 yards on the ground and four plays late Davis plowed in from three yards out.

Chowbay found Tate down the right sideline for a 40-yard TD throw late in the third period for the final score of the game. Bethel racked up 542 yards of offense, including 326 through the air, in the victory.