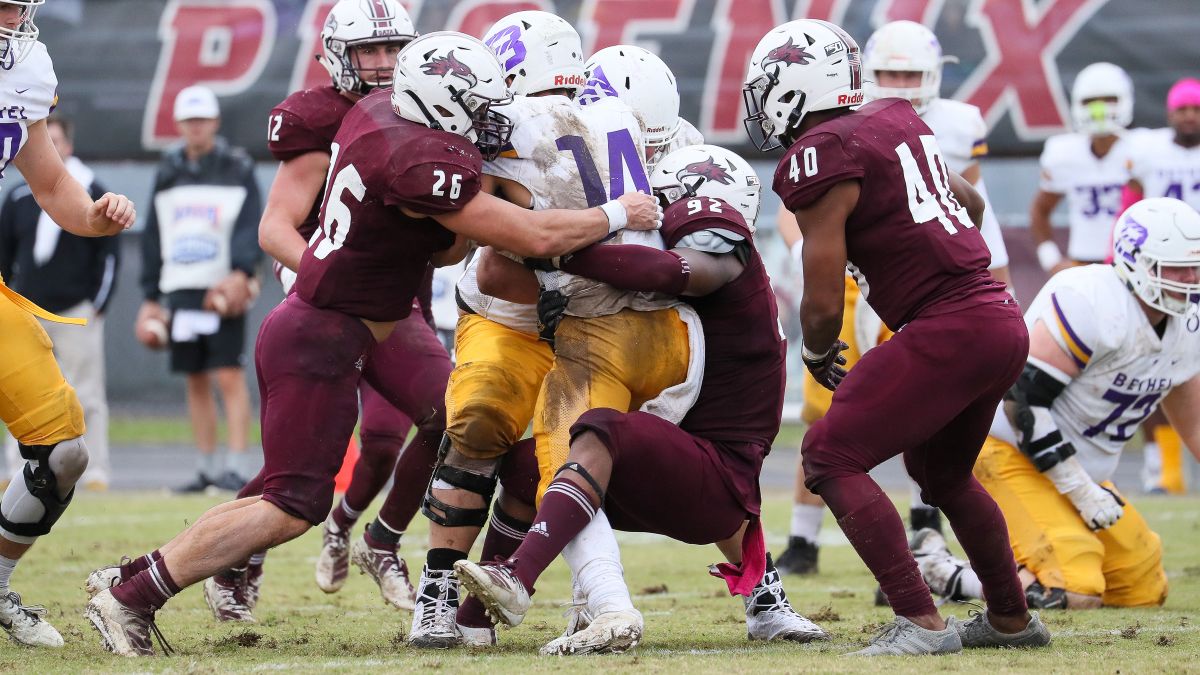 Passing yards were hard to come by for both teams, combining for 28 total passing yards on the game. Each team had to turn to the ground as the windy conditions affected this game. Cumberland ran for 142 yards while Bethel collected 224 rushing yards. The Phoenix and the Wildcats both fumbled the ball one time.

Telvin Rucker rushed for 59 yards on 15 carries and 1 touchdown. Treylon Sheppard ran for 34 yards on 11 touches. Quarterback Joseph Rushin completed 6-13 passes for 21 yards and also rushed for 15 yards and one touchdown.

Tony Bennett sparked Cumberland with a pick six in the second quarter to shift the momentum of the game. Malik Trollinger led the Phoenix upfront collecting 13 total tackles and half a sack. Champ Leddon picked up 11 tackles and Kevin Mckenzie recorded 1.5 sacks on four tackles.

Bethel's De'Ontay Tate was a workhorse for the Wildcats carrying the ball 25 times for 133 yards. Stavons Wilkes rushed 8 times for 70 yards including a 59 yard touchdown rush.

Rodrigo Campos converted a 23-yard field goal to open the scoring in the first quarter.

Kevin McKenzie and Malik Trollinger teamed up for a huge third down sack on the next Bethel possession. Bethel punted it into the stiff wind only getting 24-yards on the punt attempt. However, Bethel's Kylan Woods picked off Cumberland quarterback Rushin on the first play of the Cumberland drive and followed with a 59-yard touchdown rush by Stavonski Wilkes.

Tony Bennett sparked the Phoenix in the second quarter with an interception returned for 30 yards to the house. The Phoenix rallied around this play and followed suit without allowing another Bethel score the rest of the game.

Rucker ignited the Phoenix offense with explosive runs late in the second quarter.  He ran the ball four straight times including a 17 yard rush where he lowered his shoulder and ran over a Wildcat defender. He pounded it in the next play to give the Phoenix the 14-10 lead going into the half.

The Phoenix once again got really good field position after the wind killed a punt. The next play, Kris Parker had the ball stripped by Vonte Bates to give Bethel the ball back, but Cumberland's defense stood strong.

Bethel had the ball moving on the opening possession of the second half with a rush by Tate and catch and run by Caleb Nelson. The Wildcats took a shot at the endzone and  Kaleb Witherspoon picked it to deflate Bethel.

Ian Hafner set a Phoenix touchdown with a 38-yard punt return to put the Phoenix in Bethel territory. Treylon Sheppard with an 8-yard rush on third down to move the sticks. An unsportsmanlike penalty extended the CU drive and Rushin pushed in a sneak for the touchdown on 4th and goal.

The CU defense stood strong the rest of the game to hold the score at 21-10.

Cumberland finishes out their home schedule next Saturday vs the University of Pikeville for their Senior Day game.