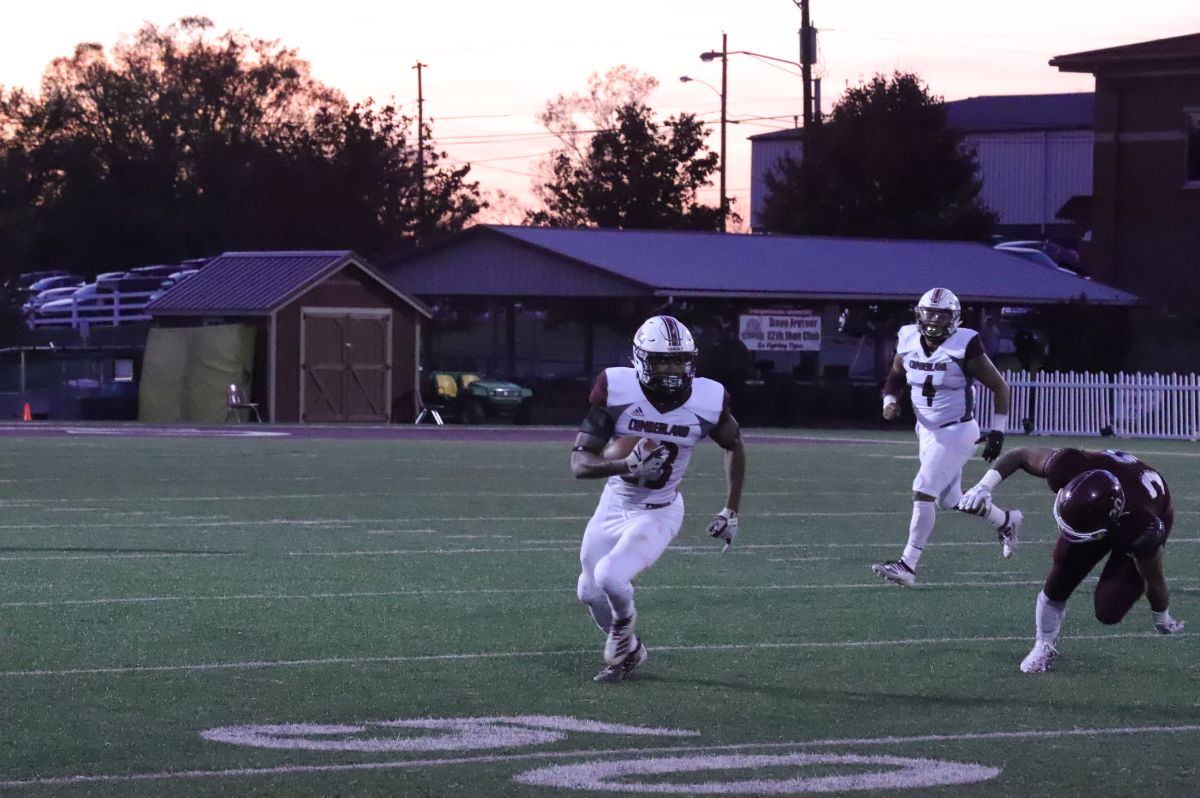 CAMPBELLSVILLE, Ky.- The Phoenix running game comes alive and the defense steps up to force four turnovers including a pick six in the win on the road against long-time rival Campbellsville, 28-13.

Cumberland (5-4, 3-2 MSC) got the offense going this week after getting shutout last week at home. The offense ran for 276 yards as eight different Phoenix collected rushes on the game. Rushin was very efficient throwing the ball as well posting a 8-of-13 for 147 yards and one touchdown line. Freshman Treylon Sheppard recorded 106 yards, his first 100+ rushing yard game of his young career, and Telvin Rucker was a workhorse as usual. Rucker posted 62 yards and two touchdowns. Rushin got in on the action as well this week running for 55 yards on 14 carries.

The pass rush showed out against Campbellsville collecting eight sacks as a unit. Campbellsville never looked comfortable on offense as the Phoenix were applying pressure constantly, never allowing the Tigers to get comfortable. Jon Carrothers played very well in the game posting 10 tackles and two sacks. Malik Trollinger posted 2.5 sacks, Ahmed Taylor registered 1.5 and Kevin McKenzie recorded a strip sack that led to a Phoenix score. The defense forced four Campbellsville turnovers, Justin Brown picked off Campbellsville quarterback Talaileva Sufia and took it back it to the house for the second pick six for the Phoenix on the year.

Campbellsville quarterbacks, Sufia and Chase Wilson, combined for 185 yards on 20-of-33 attempts and one interception. Tigers running back Ormani Zanders was a bright spot for Campbellsville as he ran for 133 yards and one touchdown and hauled in five catches for 64 yards. Wide receiver Kendon Young was Sufia's favorite target posting 80 yards on 8 receptions.

Campbellsville took the opening drive all the way inside the Phoenix 10-yard line, but Cumberland defense jumped on a loose ball fumbled by Sufia to set the tone for the game. Neither team went on to score in the first as Cumberland forced Campbellsville to a three and out deep in their own territory.

Cumberland scored early in the second quarter as Telvin Rucker punched in a three-yard touchdown to cap off a 71 yard drive. A couple possessions later, Brandon Taylor put his hat on the ball forcing Zanders to cough up the football when Campbellsville was in the redzone. Ty Martin-Miles fell on it for Cumberland. Campbellsville was looking to stall out Cumberland's offense on third down, but Sheppard broke loose for a 69-yard rush. Rucker capped it off with a 12 yard rushing touchdown to go up two scores. The Tigers wouldn't go into halftime quietly though as  Zanders busted a 47-yard touchdown run to cut the Cumberland lead to 14-7 at the break.

Campbellsville Xavier Newland returned the second half kick 38 yards to the 50. Campbellsville took advantage of the great field position and drove to inside five yard line where the drive stalled out. Noah Bicksler drilled the 22-yard attempt to go down 14-10.

The next Tiger's drive Sufia dropped back to pass and was pressured hard by the pass rush, Justin Brown fell back as Campbellsville was trying to set up the screen and picked it off and returned it to the endzone to go up 21-10. This was the first score of the year for Cumberland in the 3rd quarter. Sufia was taken out of the game as he was hurt and unable to return. His replacement, Chase Wilson, could not et comfortable as the Phoenix turned up the pressure on him getting five sacks in the remaining one and a half quarters to play.

The Phoenix added one more score in the fourth quarter as Rushin found Chris Gatewood on the bubble screen and Gatewood scooted down the sideline breaking a tackle for a 51-yard score. Campbellsville would go on to add a 42-yard field goal, but that was all the Tigers could manage as the Phoenix momentum was too much to overcome.

Cumberland will go on the road next week for the final game of the season against Georgetown. Kick-off is set for 12:30 p.m. CT.