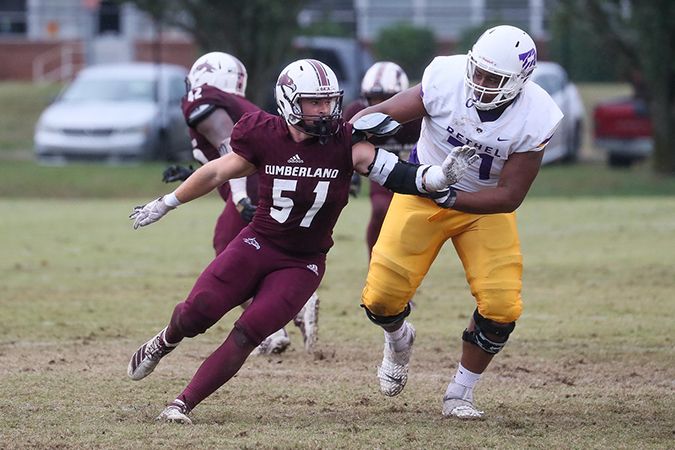 Cumberland football is one of eight NAIA programs to have at least five players earn membership. In order to be eligible student-athletes must meet the following requirements:

Justin Brown held a cumulative 3.47 GPA over four seasons of competition. The Lebanon native played in 31 games over his career with 47 total tackles from the defensive line and five sacks. This year he picked off a pass at the line of scrimmage and took it to the house against Campbellsville.

Ian Spence hauled in 13 career receptions in 30 games. He had his most productive season this year with nine catches for 76 yards. Spence also spent a bit of time handling kicking duties for the Phoenix. He held a 3.47 GPA.

Tyler Tate has been a staple for the Cumberland defense. He played in 40 career games with over 200 tackles and 6.5 sacks. He has led the defense in tackles the last two seasons and had his first career interception this season. Tate continued his success on the field in the inaugural NAIA Senior Classic. He boasts a 3.65 GPA.

Aaron White has also held down the Cumberland defense from his interior defensive line position. The Nashville, Tenn., native has a 3.25 GPA. He has collected 165 career tackles in 42 games. White has frequently been in the backfield with 11.5 sacks and 24.5 tackles for a loss.

Jeremy Williams played in 31 career games as a defensive back. He has 109 career tackles and has picked off quarterbacks two times in his career. His best campaign came his freshman season when he amassed 47 tackles and 12 pass breakups. The Hoover, Ala., native has a 3.26 GPA.

The NFF Hampshire Honor Society capitalizes on the NFF's National Scholar-Athlete program by greatly expanding the number of scholar-athletes the NFF can recognize each year. The program further strengthens the organization's leadership role in encouraging academic performance by the student-athletes at the 775 colleges and universities with football programs nationwide. The initiative has now honored 12,142 student-athletes since its inception.