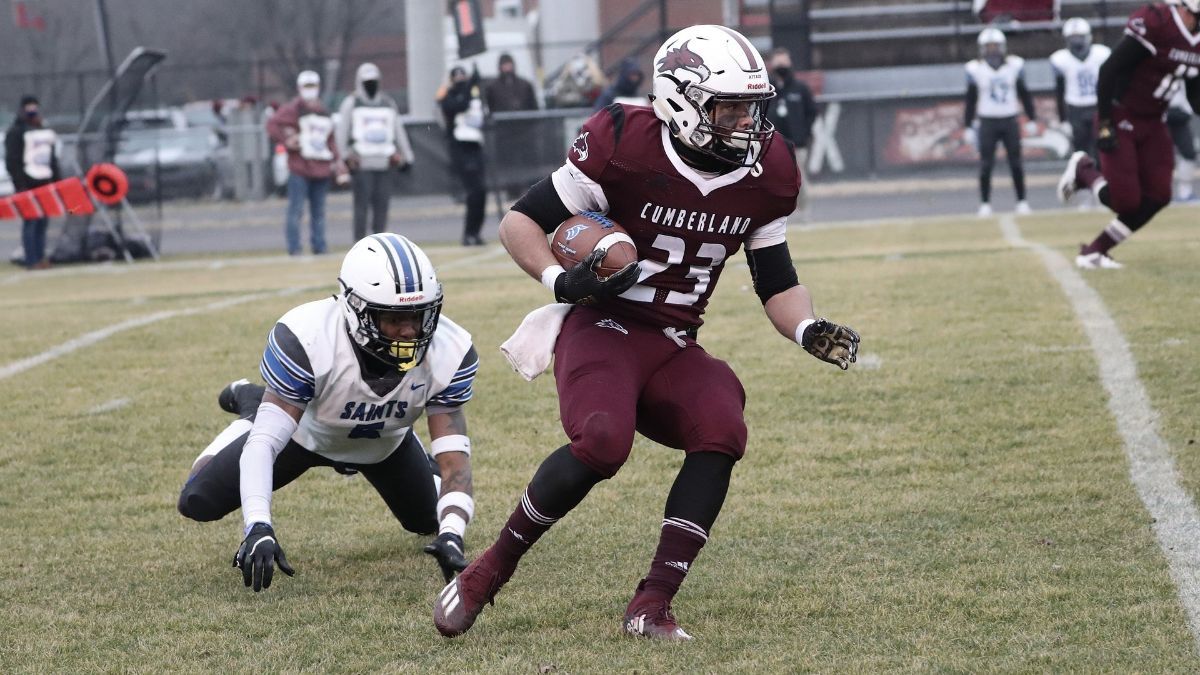 LEBANON, Tenn.--Phoenix scored a late fourth-quarter touchdown, but it was called back after a holding penalty allowing Thomas More's defense to hold on and get the 19-14 victory in the spring 2021 season opener.

Cumberland (0-1) struggled offensively only putting up 195 yards of total offense and converting just 20% (2-of-10) of their 3rd down tries. 110 yards came from the ground while redshirt freshman quarterback, Wade Cartwright, tossed for 85 passing yards on 6-of-11 attempts.

The Cumberland defense forced two takeaways in the game but struggled to get off the field on third down allowing Thomas More to convert on 10-of-20 tries and 2-of-3 fourth-down tries. Cumberland allowed 391 yards of total offense led by sophomore quarterback Jay Volpenhein. Volpenhein tossed for 220 yards on 18-of-34 attempts and rushed for 91 yards on the ground and one score. Monalo Caldwell ran for 43 yards and one touchdown on 22 carries as Thomas More picked up 171 yards on the ground.

Brandon Pace Jr. had one interception and took it back 40 yards setting up the second touchdown of the game for Sheppard. Junior Champ Leddon was all over the field defensively recording a game-high 11 tackles including 2.5 for a loss and one sack. Brandon Taylor also picked up eight tackles and one tackle for a loss. Morgan Cates and Cole Hill each had 1.5 sacks as the Phoenix were able to get to Volpenhein four times.

The Saints dominated the time of possession holding on the ball for 37 minutes while the Phoenix only held on to it for 22 minutes.

Cumberland pinned Thomas More deep after being forced to punt on the opening possession. Thomas More converted on two long third-down tries during the drive. Volpenhein was able to complete a 12-yard pass to Durham and a 20-yard pass to Gaines to keep the drive going. Caldwell capped off the 12 play drive with a six-yard rush into the endzone to grab a first quarter 7-0 lead.

After a Cartwright fumble and a big defensive stop, the Phoenix responded with a 72-yard drive for a score. Cumberland threw a deep ball to start the drive to Jaylen Taylor for 40 yards before Sheppard punched it in on the one-yard line. Cumberland tied the game 7-7 in the first quarter.

Thomas More had a chance to grab a 10-7 lead but missed a 40-yard field goal attempt. Thomas More forced Cumberland into a three-and-out taking over at their own 46-yard line. Volpenhein got loose for a 33-yard rush to open the drive and set up a 22-yard field goal from Alexander Haley with 4:29 left in the half.

Cumberland kicked to open up the third quarter. On the second play from scrimmage in the half, Ryan Brown forced a fumble recovered by Brandon Taylor at the Thomas More 26, but Cumberland was unable to capitalize on the opportunity having to punt.

The Saints were able to drive again, this time a 16-play drive that took up 7:36 seconds that ended with a 30-yard field goal from Haley to give Thomas More a 13-7 lead with 4:47 left in the third.

Haley finished 2-of-3 on field-goal attempts on the game with his long from 30 yards.

After a couple of back-and-forth possession that ended in punts, Brandon Pace Jr. picked off Volpenhein at the Cumberland 28-yard line and took it 48 yards the other direction setting up a four-play drive that ended with Sheppard's second touchdown rush from the one-yard line. This gave Cumberland a 14-13 lead with 9:19 left.

The Saints would drain the clock in their next possession taking up 6:13 on the game clock. Volpenhein orchestrated a great drive that Thomas More converted on three third downs and a fourth down. On third and long from the 34, Volpenhein was able to escape pressure and scramble for a 34-yard touchdown. The Saints failed to get the two-point conversion, but still led 19-14 with 2:59 to go.

Cartwright threw another long completion to Taylor for 28-yards to kick off the drive before rushing for six. Next play, the Phoenix ran Kaleb Witherspoon on the jet sweep and Witherspoon was able to take it 30 yards to the house, but the play was called back due to a holding penalty. Cumberland ended up in a fourth and long situation and failed to convert with 1:12 left.

Cumberland was able to force a three-and-out burning two timeouts to get the ball back. Cumberland brought the house for the block on the punt, but Espinosa was able to get off a bad punt that only went nine yards setting up the Phoenix for one last chance with 19 seconds. Cartwright threw two deep balls toward the endzone, but both were knocked away and Thomas More escaped with the victory.

Cumberland will head to Williamsburg, Ky. next Friday to take on the University of the Cumberlands.