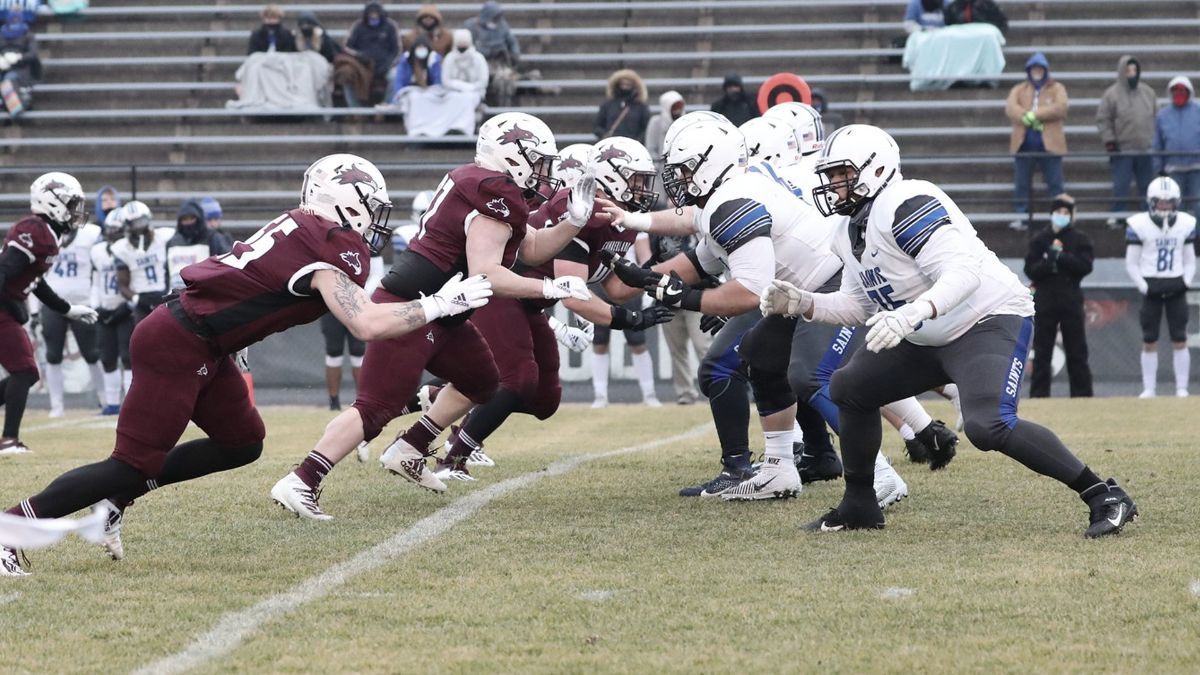 Phoenix defense gave up 42 points and 501 yards of total offense in the loss to the Cumberlands. (Credit: Bob Tamboli)
Cumberland (Tenn.) at Cumberlands (Ky.) | 0,

WILLIAMSBURG, Ky.--After having to practice inside all week due to the icy conditions and not being able to put the pads on the Phoenix were routed by the Patriots on the road 42-12.

Cumberland (0-2) was missing their starting quarterback Wade Cartwright due to injury in this game and the Phoenix offense was very one-dimensional. The Phoenix ran for 190 yards on 52 carries, but completed just two passes for 18 yards. Treylon Sheppard ran for 94 yards on 22 carries and two touchdowns. Cartwright's replacement Avery Harris ran for 89 yards on 21 carries, but that was all the Phoenix could accomplish offensively. The Phoenix put the ball on the ground five times, but only lost one fumble that went for a score.

The Patriots (1-1) had everything rolling for them. They accomplished 501 yards of total offense with 360 yards coming on the ground. Starting running back Zalon Reynolds ran for two touchdowns on eight carries and had 162 yards. Quarterback Gavin Wilkinson threw for three scores on 9-of-16 passing and 124 yards. Receiver Alonzo Russell hauled in four catches for 74 yards and two touchdowns.

The Patriots scored 21 points in the first quarter and took off from there. Their first play from scrimmage went to the house as Reynolds took it right up the gut for 64 yards. After the Patriot forced a Phoenix punt, Wilkinson capped an 8 play drive with a 22-yard touchdown toss to Alonzo Russell to put the Cumberlands up 14-0 in their first two drives.

Cumberland cut the deficit the next drive, Harris got loose on an option play for 37 yards to flip the field and then a successful option left to Chris Gatewood went for 17 yards to the 17-yard line. Sheppard bounced off two defenders to punch it in. Kicker Austin Nunley missed the point after for a 14-6 deficit.

After three-and-outs by both teams and an 8-yard punt from Cumberland after they were pinned deep, Wilkinson threw a 25-yard touchdown pass on the first play to Darius Young to put the Patriots up 21-6 at the end of the first quarter.

Cumberland forced a fumble and took over at the Patriots 42-yard line, but Harris put the ball on the turf and Brad Montgomery scooped it up and took it 42-yards for the score, Patriots led 28-6 in the second quarter.

The Patriots scored one more time before the half, after forcing a turnover on downs, Reynolds got loose again for a 45-yard score to put Cumberlands up 35-6.

Cumberlands received the ball at the half and scored again on a 4th and long play. Wilkinson dropped a dime into Russel for 41 yards and a 42-6 lead.

The Phoenix would punch it across one more time in the fourth quarter on a five-yard option play to Sheppard. This was Sheppard's second touchdown of the game and his fourth of the season. Nunley missed the point after again to cut it to 42-12.

Cumberlands would hold on to the ball for the next eight minutes of game time that ended with a turnover on downs. The Patriots went for it on fourth and goal from the eight-yard line and Jessie Parrish picked up a sack. The Phoenix would go three-and-out on the next possession and the Patriots would chew the clock to end the game.

Cumberland returns home next Friday to play Georgetown at 6:00 p.m. The Tigers enter the game 1-0 and defeated the Cumberlands in week one 27-20.