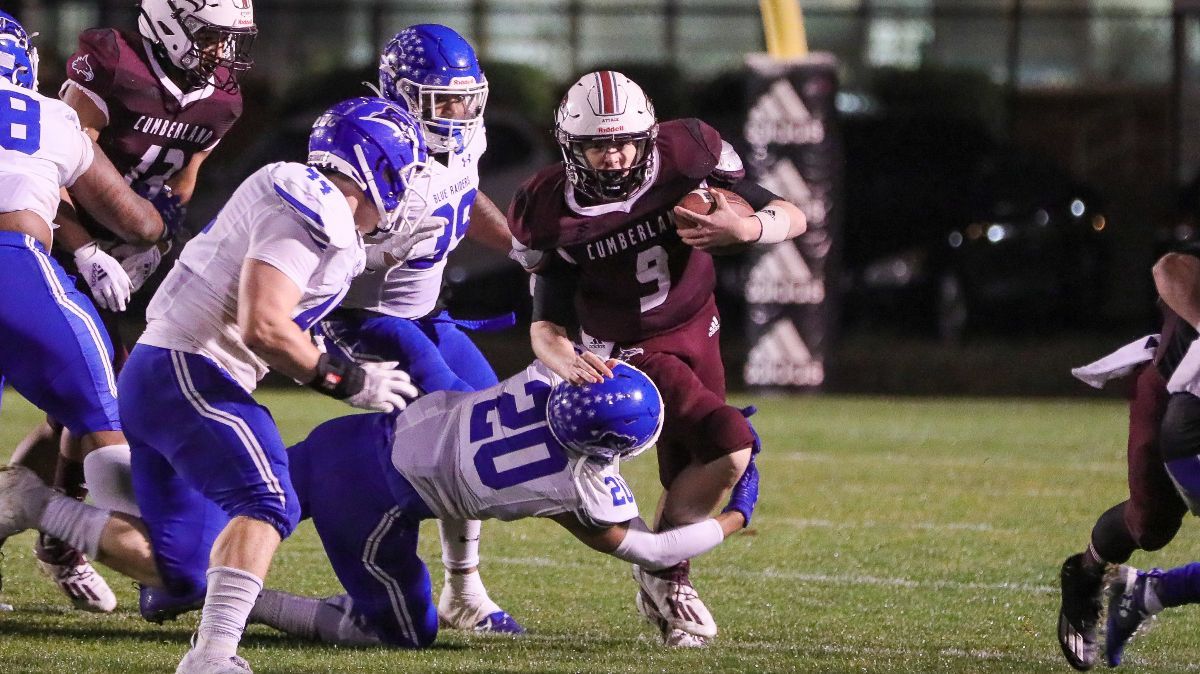 LEBANON, Tenn.--Cumberland got up early on the Blue Raiders dealing them their first deficit of the season, but No. 4 Lindsey Wilson and Cameron ukes took off in the second and third quarter for 42 points winning 56-22.

Cumberland (0-4) had their best offensive output of the season against the nation's number four defense. Lindsey Wilson had only given up 24 points in their previous game and the Phoenix scored 22 points on the Blue Raiders tonight. Coming into the game, Lindsey had averaged 37.3 rushing yard per game and Cumberland ran for 196 yards. Trylon Sheppard toted the rock 30 times for 168 rushing yards and one score.

Freshmen quarterback Brandon Edmonson was efficient in controlling the offense throwing completing 10-of-17 passes for 131 yards and also scampering for 34 yards and a touchdown. Jaylen Taylor hauled in five catches for 73 yards and a score.

Lindsey Wilson quarterback Cameron Dukes tossed five touchdowns on 13-of-20 completions for 200 yards. The Blue Raiders had a slew of backs get touches led by Kobe Belcher with 14 carries for 108 yards. Lindsey Wilson put up 533 yards of total offense.

Cumberland jumped up first after forcing a red zone turnover, the first time Lindsey Wilson has not scored in the red zone all season. Edmondson tossed it to Taylor for a 19-yard gain. Sheppard broke loose on a 42-yard rush setting up an 18-yard touchdown rush by Edmondson. The first score of the season for the Phoenix not by Sheppard. CU missed the point after for a 6-0 lead.

After a three-and-out by the Blue Raiders, Cumberland took over at their own 35-yard line. The Phoenix moved the chains one time before Edmonson put the ball on the ground and Luke Bowman scooped it up and took it 52 yards for a Lindsey Wilson touchdown and a Blue Raiders 7-6 lead.

On the ensuing possession, Cumberland was forced to punt and Helman Garcia delivered a nice kick. The ball took a few long bounces and Lindsey's Joshua Lewis tried to scoop it up, so they would not be pinned deep. It bounced off of Lewis' hands and Cumberland recovered it at the Lindsey Wilson five-yard one. Three plays later, Sheppard punched it in for his sixth touchdown of the season. Cumberland tried to go for two but was stuffed on the outside giving CU a 12-7 lead.

Next Lindsey possession, Dukes threw a bomb to Lewis for a 70-yard score. Things got a little crazy on the PAT as Cumberland blocked it, but the ball was live and Lindsey Wilson recovered it in the endzone for two points giving the Blue Raiders a 15-12 lead.

Cumberland and Lindsey Wilson were both stuffed on fourth down in back-to-back drives giving the Phoenix the ball. Cumberland was forced to punt and this time Lewis was able to make a couple of guys miss and scoot down the sideline for a 62-yard punt return touchdown, 21-12 Blue Raiders.

Lindsey Wilson added one more score just before halftime as Hafner muffed a punt giving the Blue Raiders the ball on the Cumberland 31-yard line. Dukes found Lewis with 13-seconds left in the half to put Lindsey up 28-12.

Lindsey Wilson pulled away in the second half as they scored touchdowns on their first two drives. The first came on Dukes five-yard pass to Terril Cole and the second was a 33-yard pass to Dimitrius Patterson to go up 42-12.

In the fourth quarter, Lindsey Wilson would get a 54-yard touchdown rush from Jbias Dawson and Cumberland would get a 32-yard field goal from Austin Nunley for the final score, 56-22.

Cumberland will be back in action next Friday on the road at Pikeville. Kick-off is slated for 1:30 p.m.