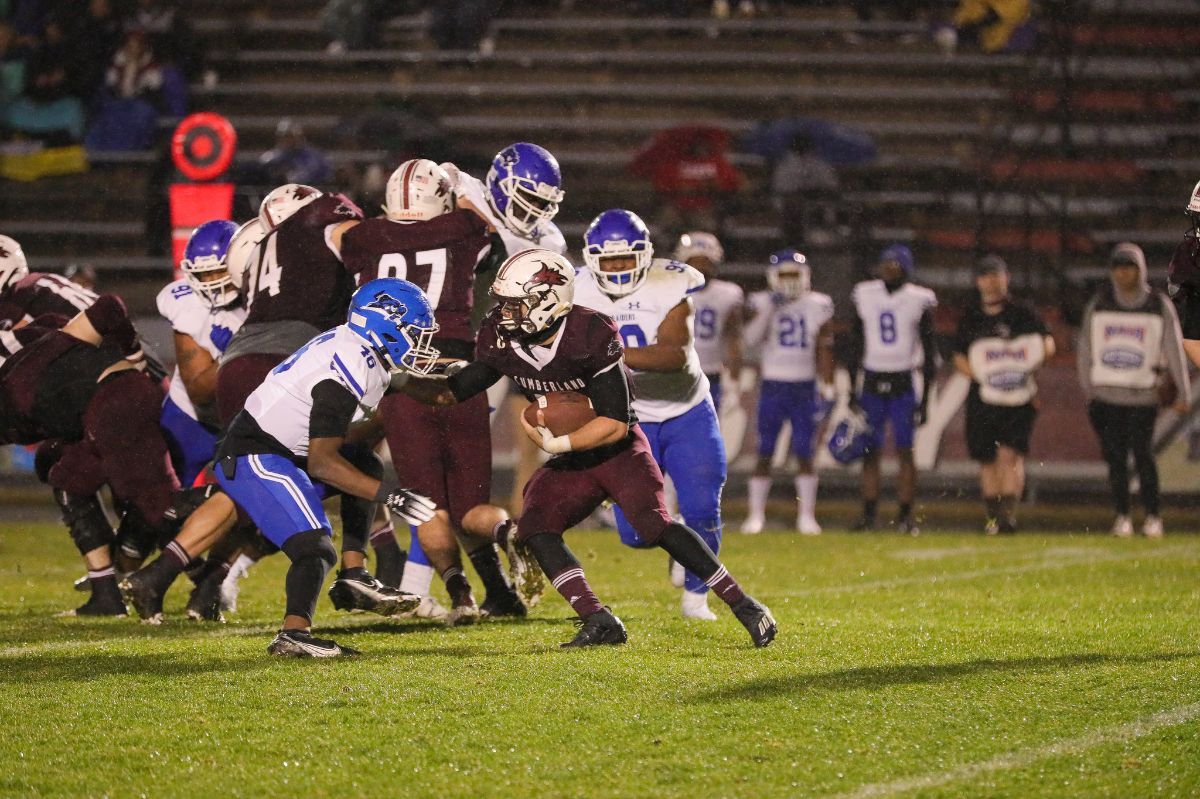 Treylon Sheppard ran for a career-high 280 yard in the win over Bethel. (Credit: Steve Wampler)
Cumberland (Tenn.) at Bethel (Tenn.) | 0,

MCKENZIE, Tenn. – Sophomore Treylon Sheppard carried the rock 47 times for 280 yards and three scores as the Phoenix rack up 457 yards of offense in the 41-38 win at Wildcat Stadium over Bethel.

The Phoenix (1-5, 1-5 Mid-South Bluegrass) trailed at the end of the first quarter 10-7, but took a lead into halftime, 20-17. Bethel (3-3, 3-3 Mid-South Bluegrass) tried to keep pace the rest of the game, but Cumberland dominated the time of possession and held on long enough to escape McKenize with their first win of the season.

Cumberland ran for 403 yards in the contest led by Sheppard 280. Kaleb Witherspoon added 85 yards on four carries for an average of 21.3 yards per carry. Quarterback Brandon Edmondson kept the ball on the ground nine times and scored two touchdowns while also completing 8-of-15 passes for 54 yards.

Cumberland was efficient on third down converting 10-of-15 tries to keep drives alive and also converted their lone fourth-down attempt. The Phoenix snapped the ball 31 more times than Bethel holding on to the ball for 39 minutes and 38 seconds of game clock.

Defensively, the Phoenix kept the Bethel run game in check holding the Wildcats to -3 rushing yards on 21 carries. Bethel did throw for 309 yards as quarterback Jacob Murphfree tossed four touchdowns, but the Cumberland defense stepped up on big downs and were able to get off the field on third down. Champ Leddon and Ismail Abdul-Qawee each picked up six tackles while Abdul-Qawee had half a sack and a fumble recovery.

Bethel jumped out to a quick 10-0 lead after kicking a field goal on the opening possession and Murphfree capped an 8-play 80-yard drive with a 22-yard touchdown pass on the second possession, but the Cumberland offense finally started to kick it into gear on their second possession. Sheppard carried it seven times out of the team's eight plays on the drive for 55 total yards ending with a 17-yard touchdown rush. Austin Nunley's point after was no good, but he went perfect the rest of the game. Cumberland trailed 10-6 with 5:36 left in the first quarter.

Cumberland finally forced a Bethel stop, but after driving all the way down the field a miscommunication led to Bethel's fumble recovery that was taken 72-yards down to the Cumberland 5-yard line. The Cumberland defense stepped up when it needed to forcing a fumble two plays later while in the red zone and the Phoenix recovered.

Cumberland answered the bell with a 16-play drive that took up six-minute of play clock to take the lead. On the drive, Cumberland converted four third down chances and one fourth down chance allowing Sheppard to punch in his second touchdown of the game from one-yard out.

Bethel was able to move the chains one time on the next possession, but Cumberland tightened the defense up and forced a punt. Witherspoon got loose on the outside for 52 yards on the opening play and to set up an Edmondson keeper for a score and a 20-10 Cumberland lead.

Bethel's return man Caleb Nelson returned the kick-off 90 yards to the endzone on the ensuing kick-off to bring the halftime score to 20-17.

Cumberland opened the second half up with the football and Sheppard continued to make big plays. Sheppard carried it seven times on the drive gaining positive yards every play and ended the nine-play drive with a one-yard touchdown rush to give the Phoenix a 27-17 lead.

Nelson again had a big return to set up the Wildcats in prime field position, but the Cumberland defense made another big stop as the Wildcats tried to go for it on fourth down, but were stuffed. Two plays later, Edmondston put the ball on the ground that gave Bethel the ball at the CU 31-yard line and Murphfree threw a dart to Nelson for a 27-yard touchdown cutting the lead to 27-24.

Cumberland extended the lead on the second play of the fourth quarter as Edmondson kept it on the option for a one-yard score. On the ensuing kick-off, Cumberland caught Bethel sleeping and squibed it off one of the up-man and recovered it to set up a prime opportunity to put the game away, but Bethel forced a three-and-out and took over on the punt.

The Wildcats however could not capitalize as Cumberland shot down another fourth down try this one deep in Bethel's territory. Cumberland took over at the Wildcat's 36-yard line and was poised to put the game away on a Witherspoon touchdown scamper, but the play was called back due to a chop block and Cumberland had to punt.

With 8:17 left and Cumberland leading by 10, the Wildcats explosive offense came to life and scored on Murphfree 16-yard pass. The drive only lasted two minutes and cut the lead to 34-31. Bethel attempted an onside kick, but up-man Trevor Griffin scooped a candy hop and made the first man miss for a clear lane to the endzone. The freshman's first career touchdown.

Bethel again responded with a 6-play 62-yard drive that ended with Murphfree's fourth touchdown pass of the game and cut it to three points again.

The Wildcats tried for the onside kick again, but Cumberland fell on it this time and was able to run out the clock for their first victory of the season.

Cumberland will play Campbellsville at home next Friday as a part of homecoming and Senior Night. Kick-off is slated for 6:00 p.m.