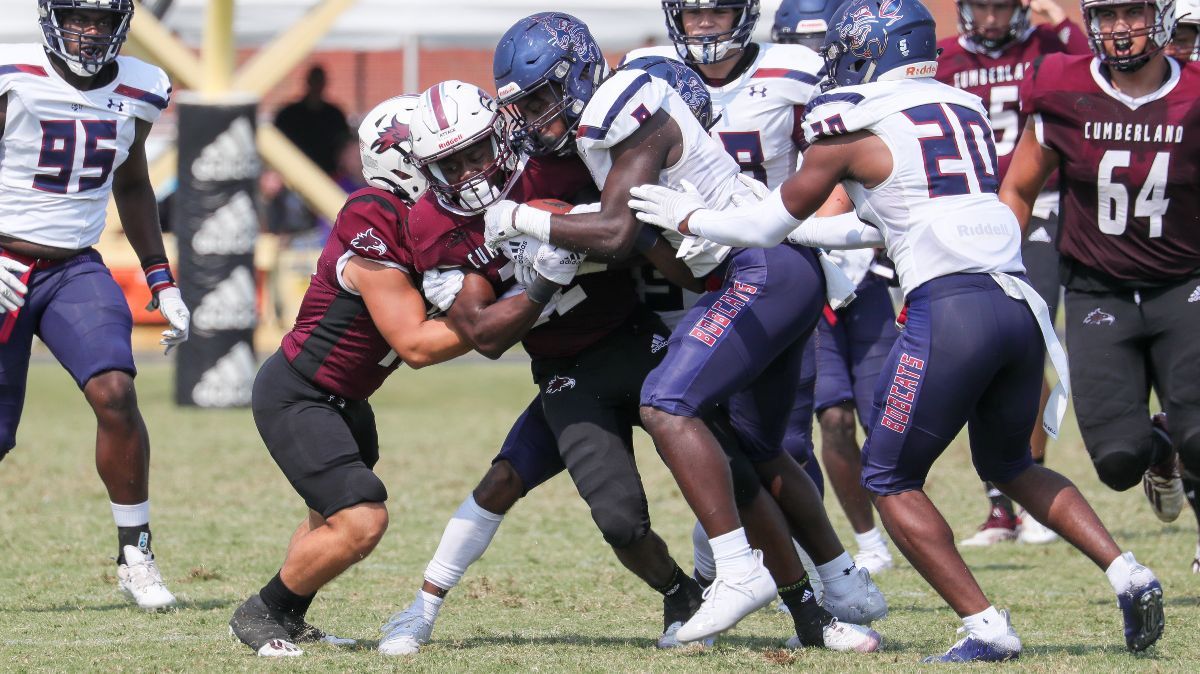 Cumberland (0-2) produced 300 yards of total offense, 174 passing and 124 rushing. Cumberland struggled on third down just converting 2-of-13 tries while giving the ball away three times.

St. Thomas (3-0) took advantage of the takeaways turning them into points each time. The Bobcats had a big second quarter scoring 24 points in the span to take the momentum of the game. Quarterback Tyler Thomas completed 21-of-32 passes for 217 yards and two touchdowns. Rontavious Farmer ran the ball 16 times for 112 yards and two scores.

Dylan Carpenter completed 19-of-31 passes for 174 yards with one touchdown and one interception. Kaleb Witherspoon picked up the most rushing yards for Cumberland with 43 on four touches and added five catches for 27 yards. Jaylen Taylor made seven catches for 51 yards and BJ Nelson made one catch for 32 yards and a touchdown.

St. Thomas jumped on the scoreboard early scoring on their first possession. Alejandro Prado capped the drive with a 35-yard field goal. After a couple of back-and-forth possessions with no scores, the Bobcats forced a fumbled and picked up the first takeaway in the half.

The Bobcats capitalized on the turnover turning it into three points as Prado nailed a field goal from 32-yards out. The first play on the next Phoenix drive Carpenter tried to thread a pass to Hafner that was intercepted and six plays later Farmer punched in an eight-yard touchdown rush.

The next drive, St. Thomas forced a three-and-out from Cumberland, three plays later Farmer got loose up the middle for a 54-yard touchdown rush to extend the lead to 20-0.

Just before the half ended, the Bobcats added one more score on a nine-play 49-yard drive. Thomas threw a dime to Colton Weismore and St. Thomas took a 27-0 lead into halftime.

St. Thomas opened up the second half with a 93-yard touchdown drive capped by Thomas' second touchdown pass to Joshua Beneby to make the score 34-0.

Cumberland's defense tightened up the remainder of the game and did not allow another score.

The Phoenix scored the only points of the game after forcing a three-and-out. Dylan Carpenter threw a touchdown pass to BJ Nelson for 34 yards. The point-after try was missed to make the score 34-6.

Cumberland had another opportunity to put points on the board, but was stuffed on a fourth-down try on the St. Thomas 28-yard line and the Bobcats were able to run out the clock and get the win.

Cumberland will be off next week with a bye, but will be back at home on Saturday, September 25 against Florida Memorial.