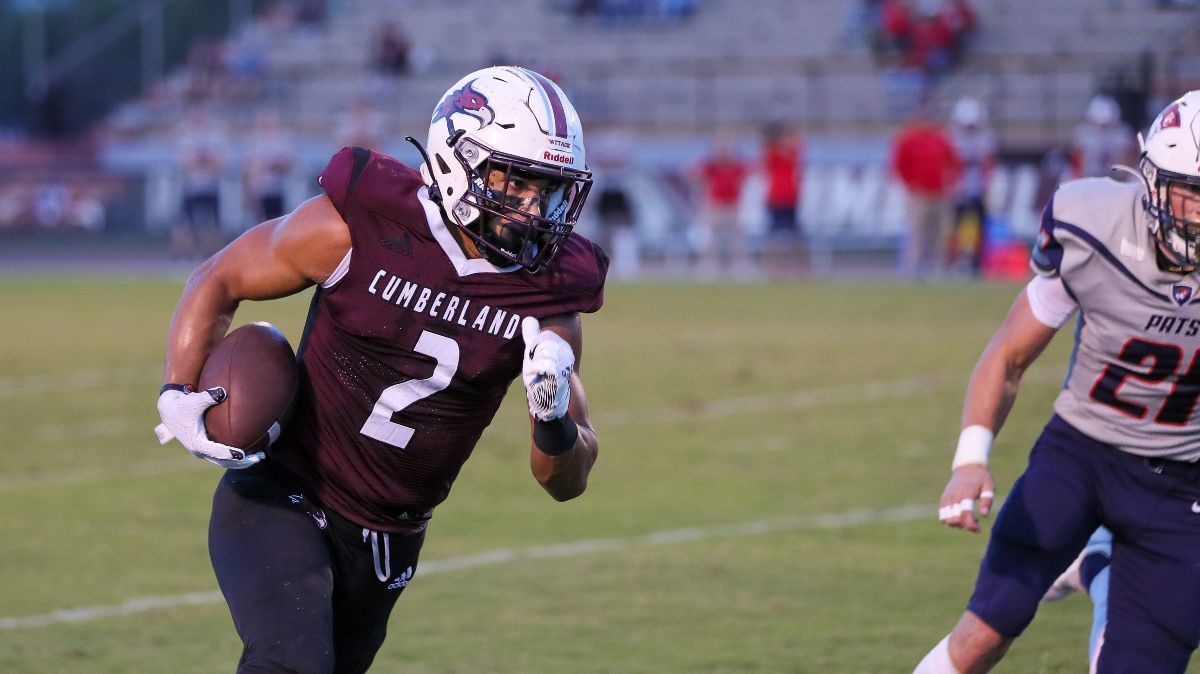 LEBANON, Tenn. – Jaylen Taylor scored a touchdown on the opening drive and a second in the final seconds of the game to help Cumberland upset No. 21 University of the Cumberlands 14-10 at Nokes Lasater Field.

The Phoenix (2-3, 1-1 Mid-South Bluegrass) defeated a Top-25 opponent for the first time since posting a 24-21 win over No. 4 Lindsey Wilson in 2018. The Cumberland defense played exceptionally holding the potent Cumberlands offense to 10 points. The Patriots averaged 56.0 point-per-game and over 450 yards of offense heading into the match.

The defense held the tenacious Cumberlands offense to just 227 yards of total offense. The Phoenix did a good job at getting off the field on third down holding the Patriots to 1-of-13 on third down. Champ Leddon notched 12 tackles while Travis Woodall had seven. Terron Smith had an interception in the second quarter.

Cumberlands quarterback, winner of two Mid-South Conference Offensive Player of the Weeks, was held to 10-of-23 passing for 116 yards and one interception. Devin Jones carried the ball 19 times for 79 yards and one score.

Cumberland opened the game with a big 14-play drive. The drive was extended after Cumberland was forced to punt to pin the Patriots back deep, but a roughing the kicker penalty gave CU an automatic first down. Four plays later on fourth and five, Carpenter swung it out wide to Taylor who made a man miss and went in for the score to give Cumberland an early 7-0 lead.

The Patriots answered with a quick 10-play drive The drive stalled in the red zone as Cumberland forced three incompletions and the Patriots elected to kick a 32-yard field goal by Trip Holloway.

After several possessions on both sides stalled out, with five minutes left in the half, the Cumberlands finally cracked the scoreboard again after penalties brought the Patriots down the field. Jones punched in a five-yard rush to take a 10-7 lead at the half.

The Phoenix defense again stood tall and forced the Patriots backwards for Tripp Holloway to attempt a 28-yarder. The try was pulled and missed left to keep the game at 10-7.

With three minutes left in the game, The Patriots held Cumberland to punt from the Cumberlands 44-yard line. Matthew Pewitt punted a beauty inside the five-yard line with 3:41 to play.

Cumberlands ran the ball with Jones three straight times and the Pats were forced to punt it back with 2:03 left. Hafner caught the fair catch at the Phoenix 46-yard line and Carpenter and the Phoenix went to work.

First play of the drive, Carpenter threw a bullet to Witherspoon for 17-yards. After a Sheppard rush for six yards, Carpenter completed a pass to Hafner for 15 to the 16-yard line. Christina brought it eight yards closer rushing through Patriots defenders. Two plays later, Carpenter floated it to Taylor at the back pylon for the score with 10 seconds left and a 14-10 lead.

Cumberlands had one last shot and Nixon threw a bomb down the sideline, but overthrew his receiver and Cumberland pulled off the upset.

The Phoenix will be back on the road next Saturday against Campbellsville University. Kick-off is slated for 12:30 p.m. central time.