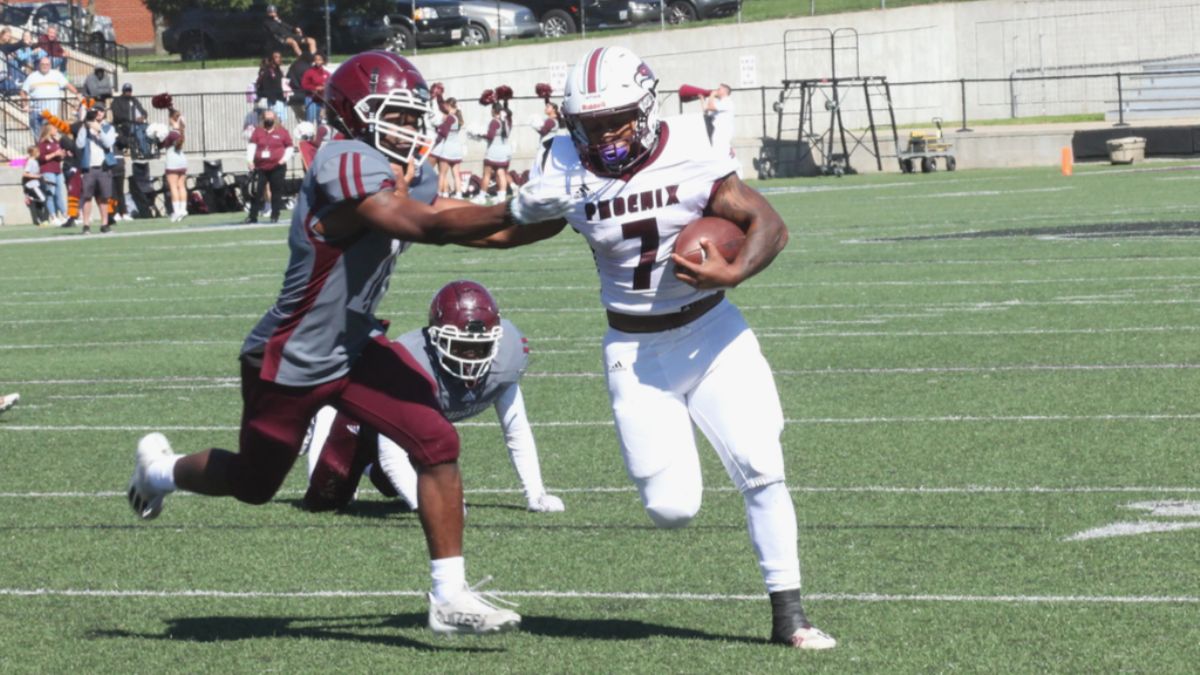 James Christian stiff arming a Tigers defender on his way to the endzone. (Credit: Kyle Allen)
Cumberland at Campbellsville | October 16, 2021

CAMPBELLSVILLE, Ky.--The Phoenix rolls through Campbellsville on the road as the offense explodes for 630 yards of offense in a 54-32 win on the road.

Cumberland (3-3, 2-1 MSC) erupted out of the gates in the first half for 46 first-half points. James Christian toted the rock 20 times for 229 yards and three touchdowns. Quarterback Dylan Carpenter completed 12-of-17 passes for 309 yards and two touchdowns. Styles Corder caught four passes for 141 yards, Jaylen Taylor had four receptions for 93 yards and a score, and Ian Hafner caught one pass for a 42-yard score.

Campbellsville (1-4, 1-2 MSC) came storming back in the second half, but had too much to overcome. Dequontay Shannon rushed for 105 yards and three scores. Quarterback Josh Meglis completed 16-of-34 passes for 218 yards, two touchdowns and one interception.

Cumberland scored on the opening drive after Campbellsville allowed the Phoenix to extend the drive on a punt by having too many players on the field. Christian ran in his first touchdown of the game from 10-yards out. The Phoenix went for two and failed for a 6-0 lead.

The first play from scrimmage for Campbellsville, Lebanon native Dequantay Shannon exploded for a 77-yard touchdown rush. The point-after try was no good and the game was tied at 6-6 after six minutes of play.

The Phoenix took just six plays to get in the end zone capped by a 15-yard touchdown rush by Kaleb Witherspoon to give Cumberland a 13-6 lead.

On the next drive, Campbellsville quarterback Josh Meglis tried to find a receiver in the slot and Trevor Griffin jumped the route perfectly to set up the Phoenix in Campbellsville territory. Four plays later Treylon Sheppard scored on a four-yard rush and Cumberland held a 20-6 lead after the first quarter.

The Phoenix defense forced a three-and-out on the next possession allowing quarterback Dylan Carpenter to throw for a 42-yard touchdown to Ian Hafner. The point-after by Hunter Mathis was good and Cumberland led 26-6 one minute into the second quarter.

After another quick go for the Tigers offense, the Phoenix handed it to Christian for three-straight carries, and on the third carry Christian broke loosed for a 45-yard score to put Cumberland up 33-6.

The next Cumberland possession, Carpenter threw a bomb to Jaylen Taylor for 44-yards and the Phoenix drove it to the goal line. On a second down play, Carpenter scrambled out of the pocket and found enough daylight to rush for a four-yard score.

The Phoenix would add one more touchdown in the half after Jayden Jobe forced a fumble, recovered on the Tigers 17-yard line. Two plays later, Carpenter threw a fade to Taylor and Taylor made a circus catch while being interfered with for the score to take a 47-6 lead into the break.

Campbellsville put up 26 points in the second half to make the score look closer than the game actually was. Christian got loose for a 65-yard touchdown rush to put the icing on the cake as the Phoenix defeated Campbellsville 54-32.

Cumberland will be back at home next Saturday for homecoming against Bethel University.