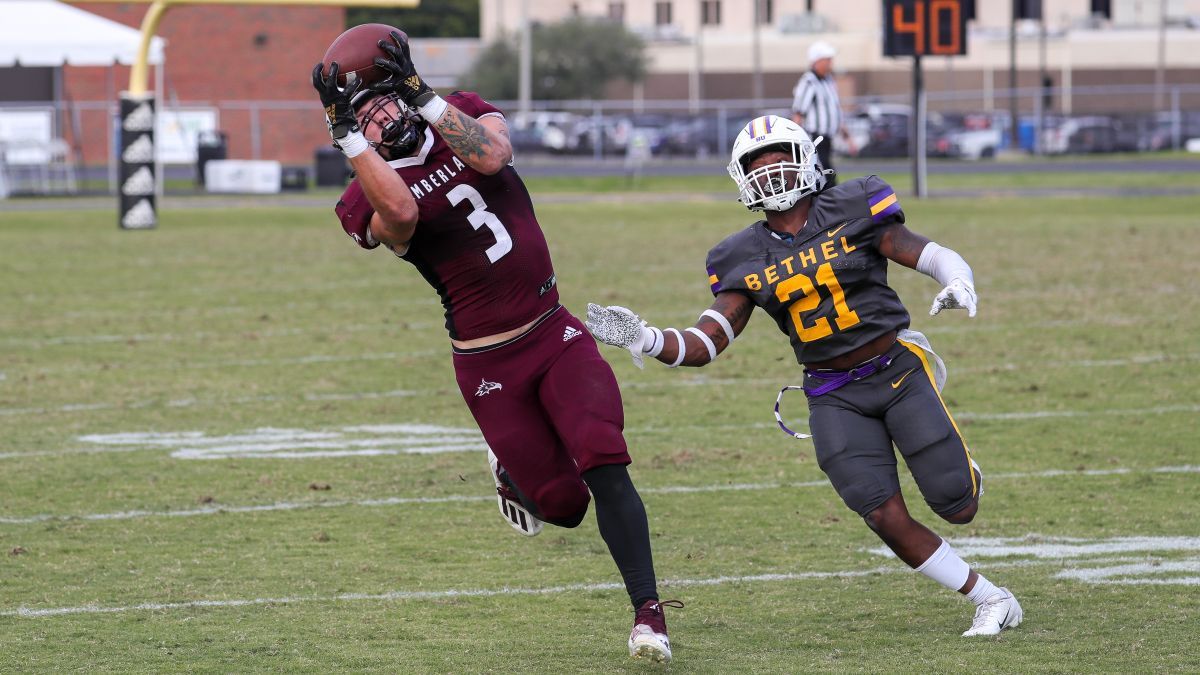 LEBANON, Tenn.--Bethel jumped up early and expanded upon the lead with explosive plays. Cumberland rallied late in the game with 17 points in the fourth quarter, but it wasn't enough to catch No. 24 Bethel University. The Wildcats picked up their sixth win of the season defeating CU 43-24 at Nokes-Lasater.

Cumberland (3-4, 2-2 MSC) was neck-and-neck with the Wildcats in total offense with a slight edge in total yards, 349 to 347. The big difference was the explosive, quick-strike offense from Bethel to pull away from the Phoenix. The Phoenix controlled time-of-possession holding on to the ball for 39 minutes and six seconds of playtime while having a very split offense with 173 rushing yards and 176 yards.

Phoenix quarterback Dylan Carpenter started the match under center and completed 6-of-17 passes for 68 yards while throwing two interceptions. Carpenter punched in a one-yard touchdown rush for Cumberland's first score of the day. Carpenter exited the game in the fourth quarter, Brandon Edmondson came in and played well. Edmondson completed 7-of-14 passes in the fourth quarter for 108 yards. He also carried the ball eight times for 26 yards and two touchdowns.

Defensively, Travis Woodall and Trevor Griffin each posted a team-high eight tackles. Brandon Pace Jr. and Victor Stephenson each had two pass break-ups and Terron Smith registered his third interception of the season.

Bethel (6-2, 3-1 MSC) relied heavily on the quarterback, running back, and wide receiver trio of Nolan Chowbay, De'ontay Tate, and James Dixon. Chowbay completed 10-of-25 passes for 206 yards for four touchdowns with one interception. Tate rushed the ball 20 times for 122 yards and one touchdown while also posting one receiving touchdown. Dixon caught five balls for 125 yards and three scores.

Bethel held Cumberland to a three-and-out to open the game and turned that into points on a 24-yard field goal by Luis Morales.

After the Wildcats stalled out Cumberland's second drive, they used a long 14-play drive to score their first touchdown of the game. Chowbay found Dixon from 13 yards out to give Bethel a 9-0 lead after the PAT was missed.

Back-to-back short drives gave Cumberland the football at the Bethel 38-yard line. A big rush by Corder and a defensive pass interference call gave Cumberland a first and goal. Bethel held strong defensively for three plays before Carpenter pushed his way into the endzone a fourth and short to cut into the lead 9-7 with 10:20 left in the first half.

Four plays later the Wildcats responded with a touchdown to extend the lead back out. Tate started the drive with a 23-yard rush, a defensive pass interference call brought the Wildcats closer. Chowbay then found Tate for a 19-yard score. The Wildcats went for two, but the conversion failed to bring it to 15-7.

The Pheonix's next possession, CU started moving the ball down the field, but on a third and long, Carpenter had his pass intercepted by Vontae Bates. Bethel was able to capitalize on the takeaway with a 58-yard bomb the next play to Dixon for a 22-7 lead heading into the intermission.

In the third quarter, Bethel drove 80 yards in eight plays capped by a 8-yard touchdown reception by Dixon to extend the lead out to 29-7.

The Phoenix then started to build momentum after Terron Smith posted an interception on Chowbay. Cumberland turned the takeaway into points as Edmondson scored his first rushing touchdown of the game to cut it to 29-14.

A short three and out gave CU the ball back at their own 39-yard line. First play, Edmondson found Hafner for 39-yards and followed that with a big rush. Bethel's defense held strong in the red zone and forced Cumberland to settle for a 25-yard field goal from Hunter Mathis to bring the score to 29-17.

With momentum shifting towards Cumberland, the ensuing kick-off was taken 88-yards to the house by Brandon Moore to suck the air out of the Cumberland side and give the Wildcats a three-score lead again at 36-17.

CU would answer with Edmondson second touchdown rush of the game, but two plays after the CU score. Tate exploded for a 36-yard touchdown rush after a failed onside kick try for the final score of 43-24.

Cumberland will be on the road next Saturday at Thomas More. Kick-off is slated for 6:00 p.m. central time. Tommy Bryan and Bob Lea will be live for the game from Crestview Hills, Ky. on WANT FM 98.9 and WCOR AM 1490.