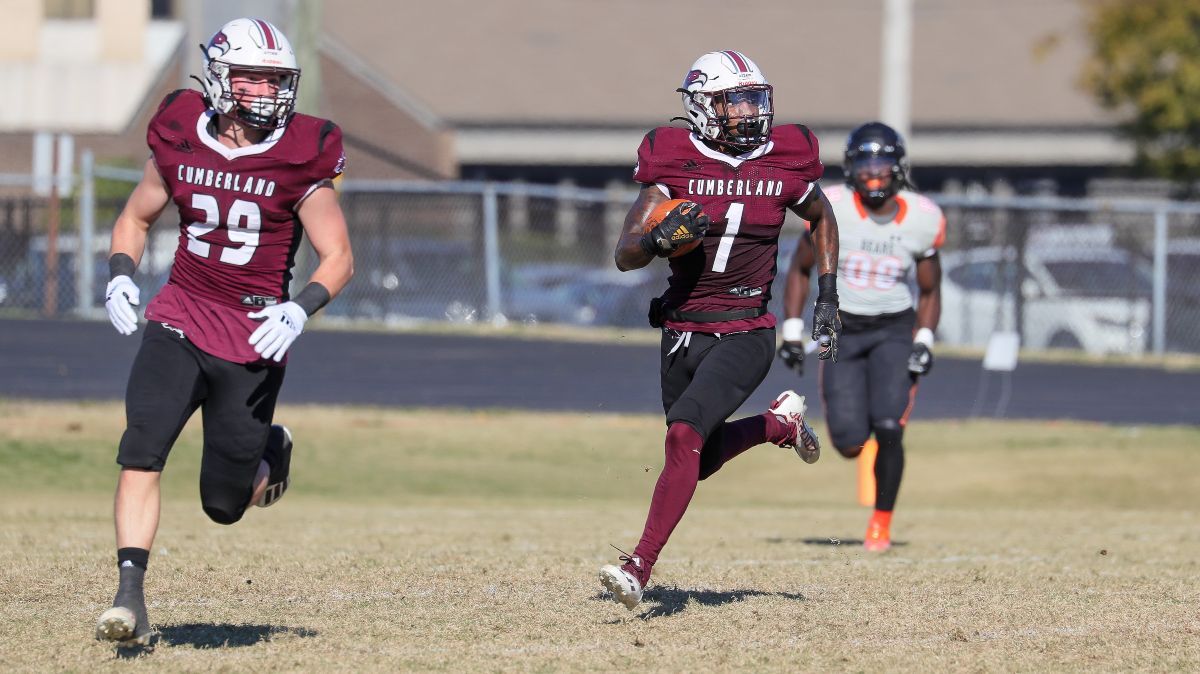 LEBANON, Tenn.--Cumberland football honored 15 seniors prior to the game, but the offense struggled to finish allowing Pikeville to spoil Senior Day at Nokes-Lasater Field on Saturday.

The loss is the Phoenix's third-straight as the team falls to 3-6 on the season and 2-4 in Mid-South Conference play. The Phoenix dominated control of the ball, holding on to it for nearly 40 minutes of game time, but the offense couldn't put it in the endzone, turning the ball over on downs five times along with three takeaways by the Bears defense.

Cumberland totaled just 92 yards through the air. Freshman quarterback Dylan Carpenter completed 12-of-25 passes for 80 yards with one touchdown and one interception. Styles Corder hauled in his first touchdown as a Phoenix in the first quarter for the lone Cumberland touchdown of the game. Witherspoon led the team in receiving with 36 yards on four catches.

The Cumberland defense played well enough to get the victory holding Pikeville to just 14 points and 254 yards of offense. Cumberland forced two takeaways with an interception and a fumble while forcing the Bears to punt six times.

The Bears relied heavily on their passing game as Cumberland allowed just 21 rushing yards in the game. Quarterback Lee Kirkland completed 18-of-34 passes for 233 yards with two touchdowns and one interception. Kirkland found Randy Ramanan five times for 82 yards and one score. Alexander Shelton totaled 57 receiving yards and D'Andre Stafford caught five passes for 52 yards and one touchdown.

Pikeville scored on the opening drive as Kirkland hit Stafford for 15-yards to cap an 11-play 61 yard drive.

The Phoenix responded with a long 17-play drive that ended in an eight-yard touchdown by Styles Corder. The point after try misses wide right. Cumberland chewed up nearly the rest of the first quarter on the drive to trail 7-6 at the end of the first.

After the defense forced a three-and-out, Cumberland drove to the Pikeville side of the field before an errant pass by Carpenter was picked off. The Cumberland defense stood strong and forced the Bears to punt it back.

Two quick drives and a short punt gave Cumberand a short field to work with before the half closed. Cumberland drove it 20 yards down the field to the Bears 31-yard line, but Pikeville stuffed a Sheppard rush on fourth and short to take over.

In the final second of the half, Kirkland found Bralin Barton for a 35-yard score, but the play was called back due to holding. The Bears threw one last heave towards the end zone and Prentiss Sumerall picked it off. Summerall found some space, but was chased down after taking 59 yards. The Bears took a 7-6 lead into halftime.

Out of the break, Cumberland again drove it down the field to the Pikeville 24-yard line. On a fourth and one play, Cumberland decided to go for it and Carpenter fumbled the snap on a sneak attempt. He recovered it, but could not get across the yard to gain and CU turned it over to UPike.

Cumberland forced a three-and-out the next drive, after punting issues in the first half, the Bears swapped punters. A low line drive punt caught by Ian Hafner was taking all the way to Pikeville's 29-yard line. The Pikeville defense stood tall and forced a takeaway as Jaylen Taylor put the ball on the ground on fourth and one forcing another turnover in Pikeville territory.

At the end of the third, Pikeville finally moved the ball down field, converting on three third down plays to get to the Cumberland half of the field. Kirkland threw a 47-yard touchdown pass to Ramanan on a busted coverage to give the Bears a 14-6 lead.

Hafner again had a big return on the ensuing kickoff to start the drive in plus territory for Cumberland. CU could just manage 19 yards, but Hunter Mathis hit a career-long 37 yard field goal to cut the deficit to 14-9.

The defense had another quick stint forcing Pikevill to punt after just five plays. Starting at their own 20-yard line, the Phoenix took it deep into Bears territory before being faced with a fourth down and three. CU tried to get Corder outside the box on a jet sweep, but the Bears stuffed the play and took over.

Cumberland forced a fumble four plays later to give the Phoenix life, but one last drive was spoiled as Pikeville had one more fourth down stop allowing the Bears to pick up their first conference win and move to 3-6 on the season.

Cumberland will play their season finale next Saturday on the road at Georgetown. Kick-off is set for 12:30 p.m. central time.