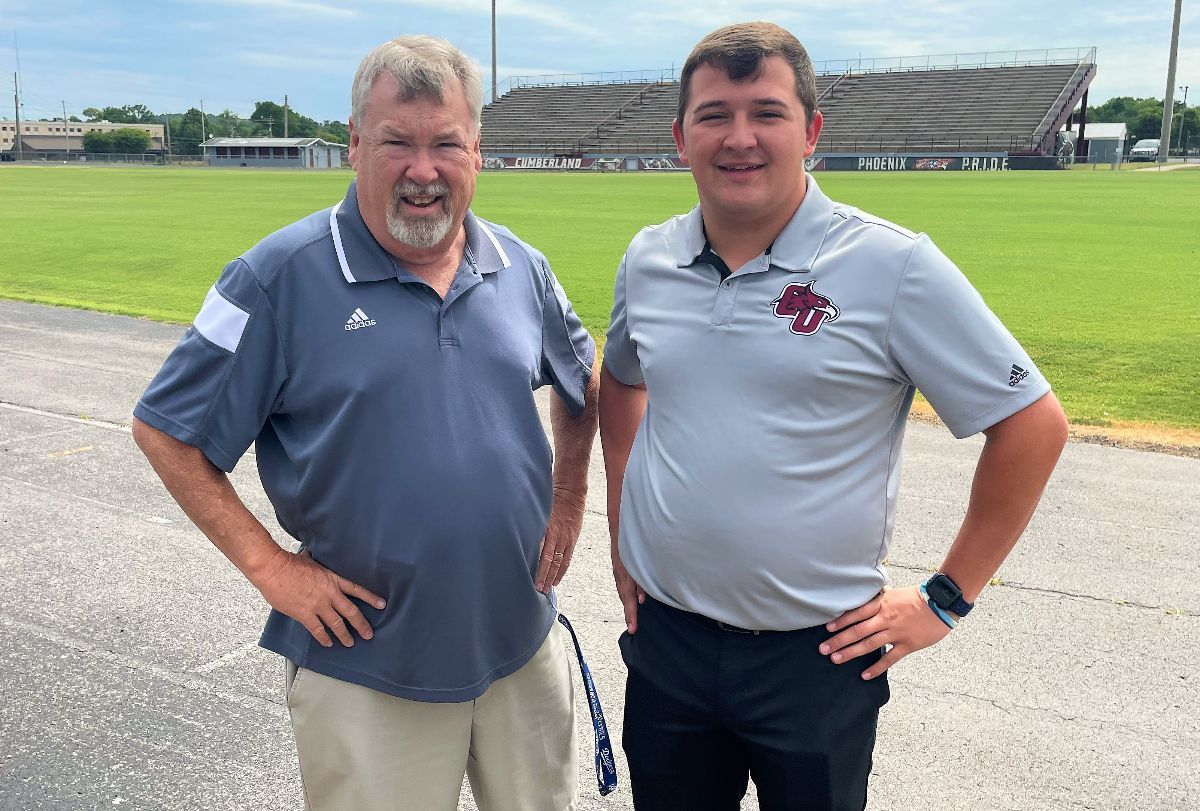 LEBANON, Tenn.--Cumberland University Sports Hall of Famer and voice of Cumberland Football Tommy Bryan steps down from his position as the play-by-play announcer at CU football games. Christian Kaposy, an up-and-coming radio personality, will step into the position.

"I just appreciate everything Tommy has done and will continue to do for Cumberland," Director of Athletics Ron Pavan said. "He has always been great to us both on and off the air. He will still be involved as he is on the Sports Hall of Fame Committee, but we will miss him in the booth."

Bryan has been calling Cumberland football games for the past 13 seasons alongside with Bob Lea. He has called 67 wins over the years all heard on WANT-FM, WCOR-AM, and the Cumberland Sports Network.

"I appreciate the opportunity Ron Pavan gave me over 13 years ago to call Cumberland football," Bryan said. "It's been fun, but always a grind - preparing for a Lebanon game on Friday and a Cumberland game on Saturday."

"Back in March, I took a long look at the schedule and decided I wasn't very excited about the prospects of broadcasting the 2022 season," he added. "I knew then it was time to step aside and make way for someone younger and more energetic to handle the play by play duties."

Kaposy will take over the play-by-play duties with Lea still working by his side as the color commentator. Kaposy has worked with Titans Radio on 104.5 the Zone and calls the Green Hill High School football games on Friday nights.

He is a 2020 Belmont graduate that has worked closely with the Bruins and their ESPN+ teams working on broadcasts for all Belmont sporting events. Kaposy also has experience working with Vanderbilt's football radio crew working as a spotter.

He is also familiar with Cumberland working as the basketball public address announcer for the past three seasons.

"Christian is an up-and-coming talent with the experience and education to handle anything that might come his way," Bryan said. "I know he will do his homework for every Saturday broadcast of Cumberland football and give his listeners a quality product. He'll also have the benefit of working alongside my friend Bob (Lea) - a guy he can lean on."

Sports Information Director Kyle Allen said, "When it comes to football in Wilson County, Tommy Bryan has been at the forefront of it for a long time and we will miss his knowledge and experience at Cumberland. I am excited for Christian coming in though, I know he will do a great job, he works hard at mastering his craft each day, and will be great along with Bob."

Bryan remains as the play-by-play voice of Lebanon High football on WANT-FM and WCOR-AM along with Terry Stafford, Lea and Joe Gardner. Bryan and Stafford started working together with Bruce Skeen in covering Blue Devil football in 1986.