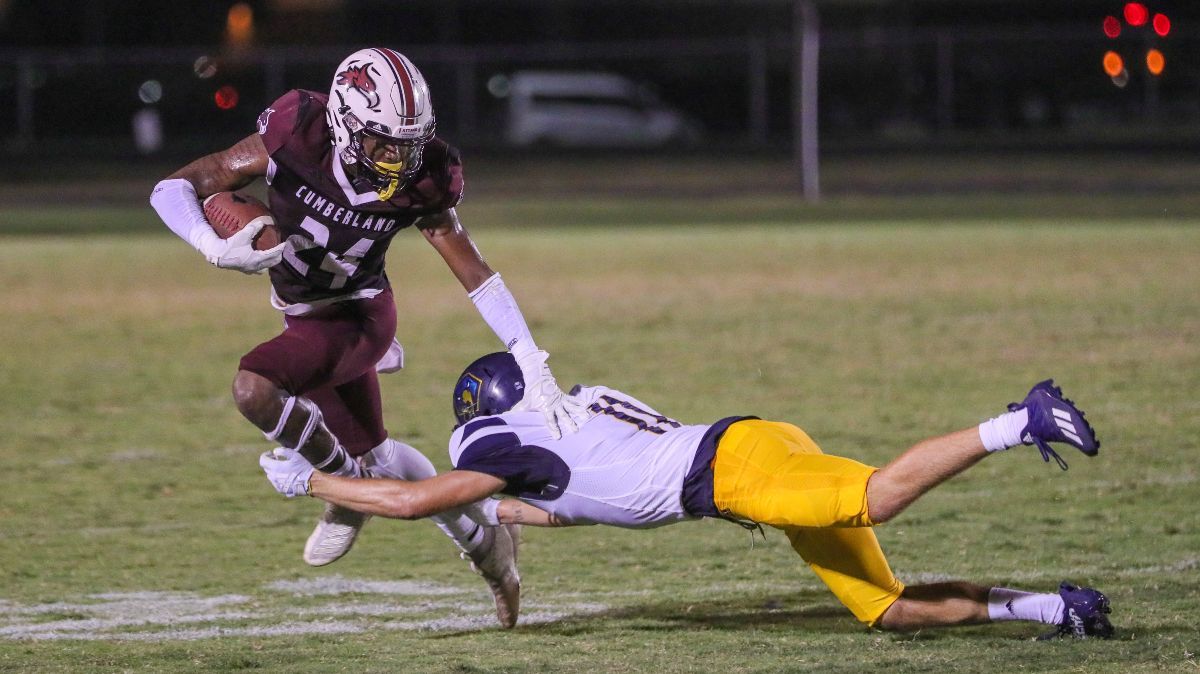 Elijah Gaskin shaking a defender on his way to the endzone. (Credit: Steve Wampler)
Point at Cumberland | August 27, 2022

LEBANON, Tenn.--Cumberland scored four touchdowns in the final three minutes of the second quarter to propel the Phoenix to a 34-7 win over Point University in the season opener at Nokes-Lasater Field.

The Cumberland offense tacked on a total of 317 yards in the opener, 107 rushing and 210 in the air. Quarterback Luke Holloway made a splash in Phoenix debut throwing for all 210 yards on 18-of-35 passing and two touchdowns. Holloway also scrambled for one score on the ground.

Treylon Sheppard and Corey Johnson split snaps in the backfield as Sheppard had 13 carries for 54 yards and Johnson had nine carries for 35 and one touchdown. Elijah Gaskin was the leading receiver for CU picking up three catches for 69 and a score. Jaylen Taylor posted the other receiving touchdown on three catches for 26 yards and Shaw Nibleet hauled in seven passes for 50 yards.

The Phoenix had four takeaways defensively to set the tone for the offense. CU held Point to just 79 yards rushing although the Skyhawks were able to find a little bit of sparks through the air connecting for 215 yards. The defense played great on third down allowing Point to convert just 4-of-20 tries on third down and 1-of-6 on fourth down.

Travis Woodall led all CU tacklers with nine on the game. Trevor Griffin and Lennon Harris each had interceptions while Griffin also forced a fumble that the Phoenix recovered. Ismail Abdul also forced a turnover with a forced fumble and Josh Jones picked up five tackles from the interior defensive line.

Point University ran out three different quarterbacks in the game as none of them were able to find any comfort from the relentless pressure from Cumberland. Payton Allen, Mitchell Gosset, and Brenden White combined to go 17-for-46 for 215 yards with one touchdown and two interceptions.

With 4:20 left in the first quarter, Griffin picked off Point quarterback Brenden White to set up the Phoenix inside the Point 10-yard line. An intentional rounding call and two incompletions Cumberland was forced to attempt a 38-yard field goal that Hunter Mathis pulled just left of the upright.

At the end of the first and rolling into the second quarter, Point blocked punter Mathew Pewitt and set them up in friendly field position. The Cumberland defense stood strong and Griffin forced a fumble in the red zone to stifle the Skyhawks opportunity.

Two drives later, Point attempted a long 47-yard field goal that kicker Giovanni Martin missed. On the ensuing drive, Cumberland went seven plays for 70 yards for a score. On the drive Holloway went 5-for-5, capping it with a 26-yard strike to Gaskin for the touchdown for a 7-0 lead.

Three plays later, Lennon Harris picked off Point Quarterback Payton Allen at the Point 26-yard line. The next play, Holloway found Joe Johnson for 19 yards and then Corey Johnson finished with a seven yard touchdown run and 14-0 lead with 1:49 left in the half.

The Cumberland defense again showed tough forcing a three-and-out on the next possession. Cumberland brought the house on the punt forcing the punter to drop it for a turnover in the red zone. On the next play from scrimmage, Holloway threw a 14-yard strike to Jaylen Taylor and Cumberland went up 21-0.

With less than a minute left in the half, Point had two big penalties backing them up and forcing them into another punt situation with 45 seconds left in the half. CU again went for the block and the Point punter this time fumbled it, recovered by Point, but a turnover on downs deep in Skyhawk territory.

CU again capitalized on the Point mistake as Holloway scrambled for a 14-yard touchdown and a 28-0 lead at the half.

In the third quarter, Point was able to get on the board after taking advantage of a bad snap on a punt for Cumberland forcing Pewitt to fall on the punt for the turnover. The next play for Point was a 33-yard touchdown pass from Mitchell Gossett to Jacquez Bartley for a touchdown. Cumberland led 28-7 with 8:20 left in the third.

Hunter Mathis would knock down two field goals in the third quarter. The first came from 24 yards out and the second was 27 yards to bring the final score to 34-7.

Next week, CU will remain at home to take on Webber International. Tickets for the game are on sale now. Kick-off is set for 1:30 p.m. at Nokes-Lasater Field.