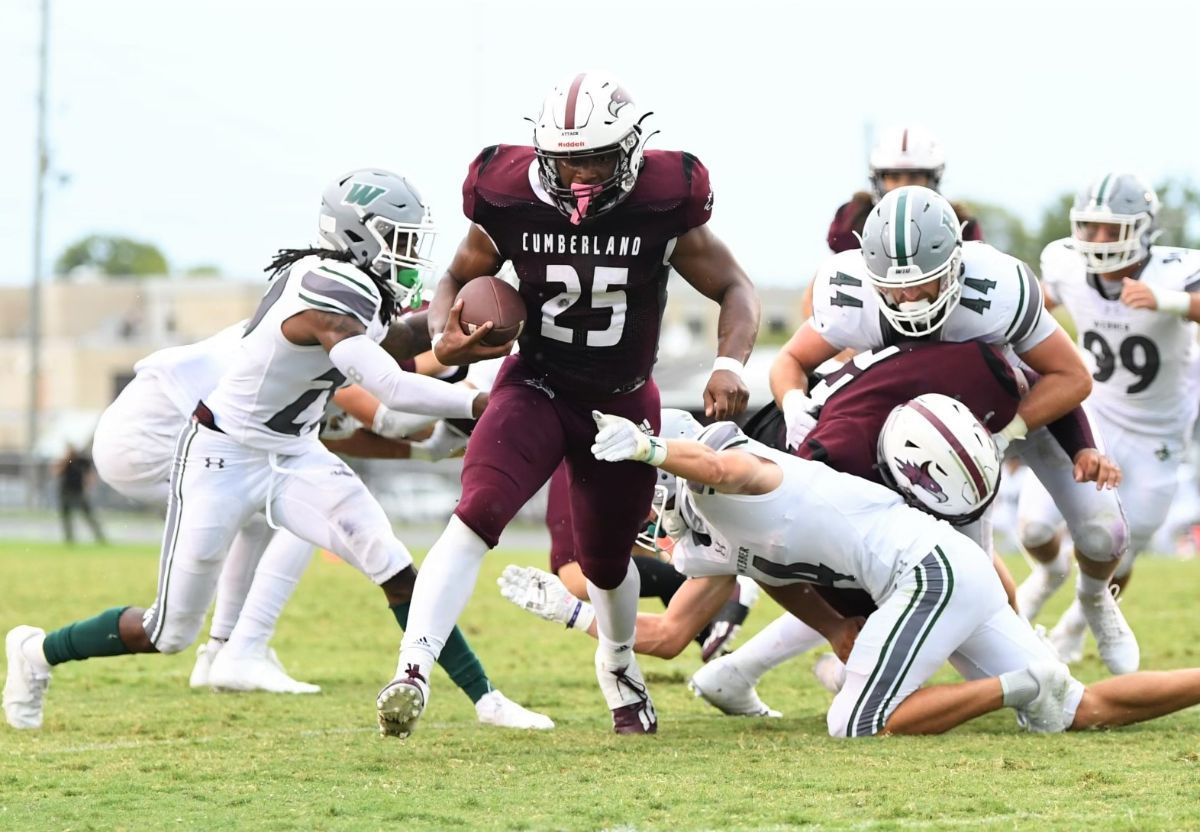 LEBANON, Tenn.--Cumberland football rallies for two scores in the fourth quarter to overcome a late deficit and escape with an exciting 25-24 win over Webber International to improve to 2-0 on the season.

Trailing 17-7 at the half, Cumberland got within a score with a field goal, but Webber responded immediately with an 11-play 74 yard touchdown drive to take a 24-10 lead with 3:52 left in the third.

Cumberland would push across a touchdown rush from running back Corey Johnson, but the point-after try hit the left up right for a 24-16 deficit just before the third quarter ended.

With Webber driving, the Cumberland defense stopped the Warriors on a fourth down and short try at the Cumberland 21-yard line to force a much needed turnover. Cumberland used that momentum and drove the field to score on a 13 play drive capped off with a Luke Holloway 19 yard touchdown scamper. The two-point try was no good and Cumberland needed another stop trailing 24-22 with just 5:23 to play.

The defense stepped up and forced a three-and-out for Webber. On the punt try, a high snap allowed Ismail Abdul Qawe to come off the edge and block the punt allowing Cumberland to take over in field goal range at their own 14 yard line.

The Warriors defense stepped up to force the field goal try, but kicker Hunter Mathis redeemed his missed PAT with the game-winning field goal with just over two minutes to play to defeat Webber 25-24.

Cumberland got back to their identity by pounding the football on the ground for 227 yards. Johnson had 22 carries for 110 carries and one touchdown. Treylon Sheppard posted 20 carries for 80 yards and quarterback Holloway ran the ball seven times for 61 yards and a touchdown.

CU struggled to move the ball through the air only completing 12-of-29 pass attempts for 79 yards. Joe Johnson and Jaylen Tayor each hauled in five catches for 38 yards and 34 yards, respectively.

The Phoenix improved their marks on third down converting on 8-of-19 tries after only converting two third down tries last week. Cumberland dominated the time of possession in the game holding the ball for nearly 35 minutes.

Despite allowing 405 yards of total offense for Webber, the Cumberland defense made plays when they needed to, forcing two stops on fourth down in the fourth quarter and having one defensive touchdown on a five-yard fumble return by Jalen Dallas that Abdul Qawee forced.

Webber completed 18-of-31 passes for 210 yards and ran for 195. Quarterback Cody Braden threw for 197 yards with two touchdown passes of 70 yards and 11 yards. Terry Weems Jr. had seven rushes for 101 yards and a score with a 70-yard touchdown rush.

Rocky O’Rourke posted 10 tackles for the Warriors while Parker Snead and Devonte Harris each had seven.

Cumberland was on the board first as Abdul Qawee forced a fumble that Dallas scooped up and took to the house for a 7-0 lead in the first quarter.

Two plays later, the quick strike Warrior offense tied the game on a 70-yard touchdown strike from Braden to Jacob Moss with six seconds left in the quarter.

After Cumberland was forced to punt on the next drive, Webber struck quickly again. On the third play of the drive, Weems Jr. found a seam in the defense and rushed 70 yards for the touchdown and a 14-7 lead with 12:26 left in the half.

The next Webber drive, the Warriors had a long 14 play, 84 yard drive that halted inside the ten as Webber was forced to settle for a 24 yard field goal before the half ended for a 17-7 lead.

The second half was when Cumberland hit their stride and made their late comeback to win the game. The win is the first time the Phoenix have started 2-0 since the 2019 season.

Next week Cumberland will go on the road for the first time to take on No. 9 Reinhardt. Kickoff is slated for 11 a.m. central time.