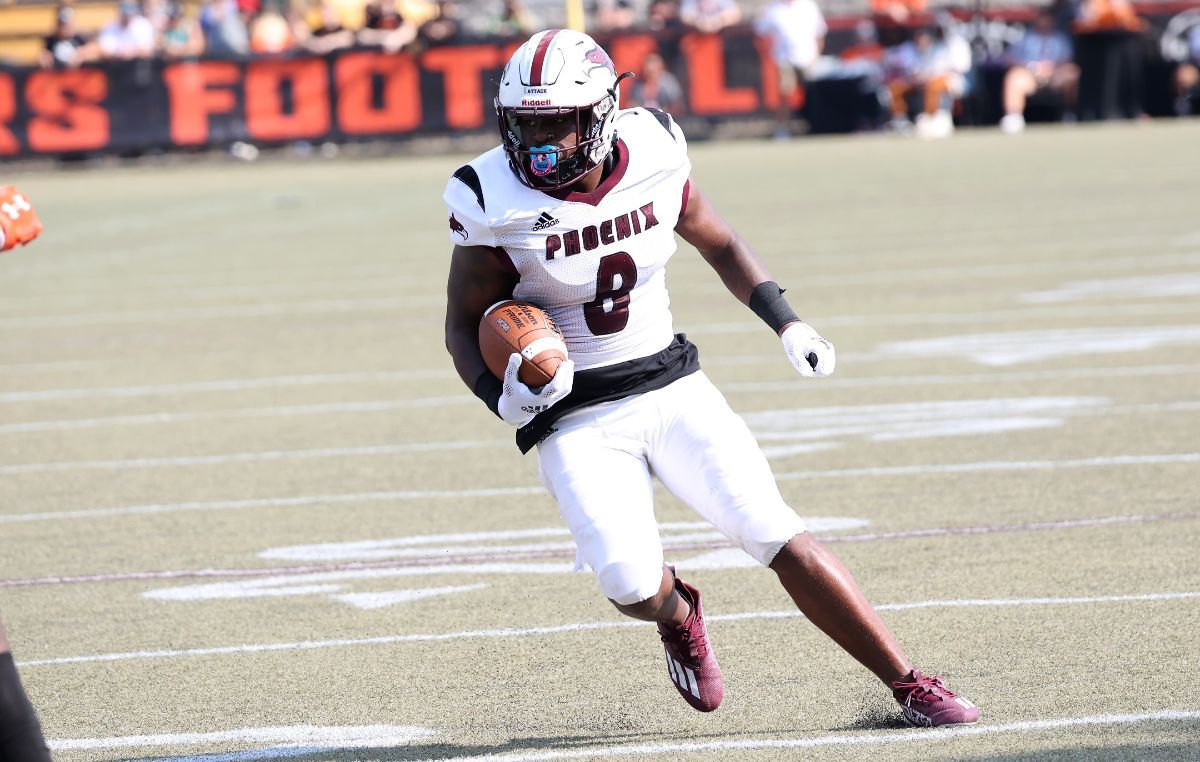 PIKEVILLE, Ky.--Lee Kirkland and the Pikeville Bears hang 47 points and 662 offensive yards to outduel the Phoenix, 47-24.

Cumberland (2-1, 0-1 MSC) put up 37 for their most in a game on the season, but could not slow down the Pikeville offense allowing big plays to suffer their first loss of the season.

Quarterback Luke Holloway threw for a season-high 280 yards with three touchdowns passes, but threw three interceptions. Running back Treylon Sheppard ran for 55 yards on 14 carries and caught three passes for 68 yards and a score. Jaylen Taylor was the leading receiver for Cumberland hauling in seven catches for 127 yards and a touchdown and Elijah Gaskin caught four passes for 53 yards and a score.

The Cumberland defense forced four turnovers, but could not stop the passing game of Pikeville. Jallen Dallas had an interception for a pick six, his second defensive touchdown of the season. Trevor Griffin intercepted a pass in the endzone and Champ Leddon forced a fumble for a turnover.

Pikeville (2-0, 1-0 MSC) capitalized on their air raid offense picking up the Cumberland defense going for 662 yards of total offense. Lee Kirkland threw for the second-most yards in school history posting 579 yards and four touchdowns. Kirkland had 10 different pass catchers led by Derrick Griffith and Alex Sanders for 127 and 121 yards, respectively.

The Bears forced a three-and-out for Cumberland’s opening possession and went 19 plays for 72 yards as Kirkland found Rashad Brown for a 5-yard touchdown pass. The point after was mishandled for just a 6-0 Pikeville lead.

The next Pikeville possession following a Phoenix punt, Kirkland found Alex Sanders wide open for a one play 80 yard strike and 13-0 Bears lead.

Cumberland finally started to get in some rhythm on their third possession, moving the chains three times before Nick Burge found paydirt for the first time this season on the final play of the first quarter. Pikeville lead 13-7 after the first quarter.

Two plays later, Champ Leddon forced a fumble that Josh Jones recovered and Cumberland was able to get points as Hunter Mathis made a 24-yard field goal to cut it to a 13-10 lead.

The Bears answered quickly scoring in a minute and 48 seconds on a 10-yard touchdown rush by quarterback Kirkland to extend it to 20-10.

After a Phoenix punt, the first play for the Bears was intercepted by Jallen Dallas who took it to the house for his second touchdown of the season and a 20-17 game.

The first play from scrimmage, Kirkland threw a bomb down the sideline of the field to Derrick Griffith for a 74-yard touchdown score for a Pikeville 27-17 lead where the score would remain until half.

The Bears started the second half with the ball and went 75 yards in eight plays capped by a one yard touchdown rush by Alex Sanders to extend the lead.

After a three-and-out by Cumberland a turnover on down by the Bears, Cumberland cuts the lead to 10 as Luke Holloway finds Elijay Gaskin for a 42-yard touchdown to cut it to 34-24.

The Bears scored on their next possession capped by a 31-yard touchdown pass from Kirkland to Brown to extend the lead to 40-24.

Trying to put the game away, the Bears forced a punt after a three-and-out. The ensuing punt was muffed allowing Cumberland’s Timothy Freel to fall on it on the two yard line. Cumberland however was intercepted in the endzone by Cameron Miller. Miller returned it 100 yards for a pick six and 47-27 advantage after three quarters.

Cumberland forces the first punt of the game by Pikeville and Cumberland goes 72 yards for a score capped by a Jaylen Taylor touchdown reception and a 47-31 deficit.

Still trying to put the game away, the Bears drive the field to inside the five yard line where Kirkland had a pass intercepted in the endzone by Trevor Griffin. The Phoenix, still battling, would go 80 yards as Holloway finds Treylon Sheppard for a 29 yard touchdown. The Phoenix went for two trying to cut it to a one score game, but were unsuccessful to cut the score to 47-37 where the score would stand throughout the rest of the game.

The Phoenix will take on No. 10 Georgetown next Saturday at home. Kickoff is slated for 1:30 p.m. central time.