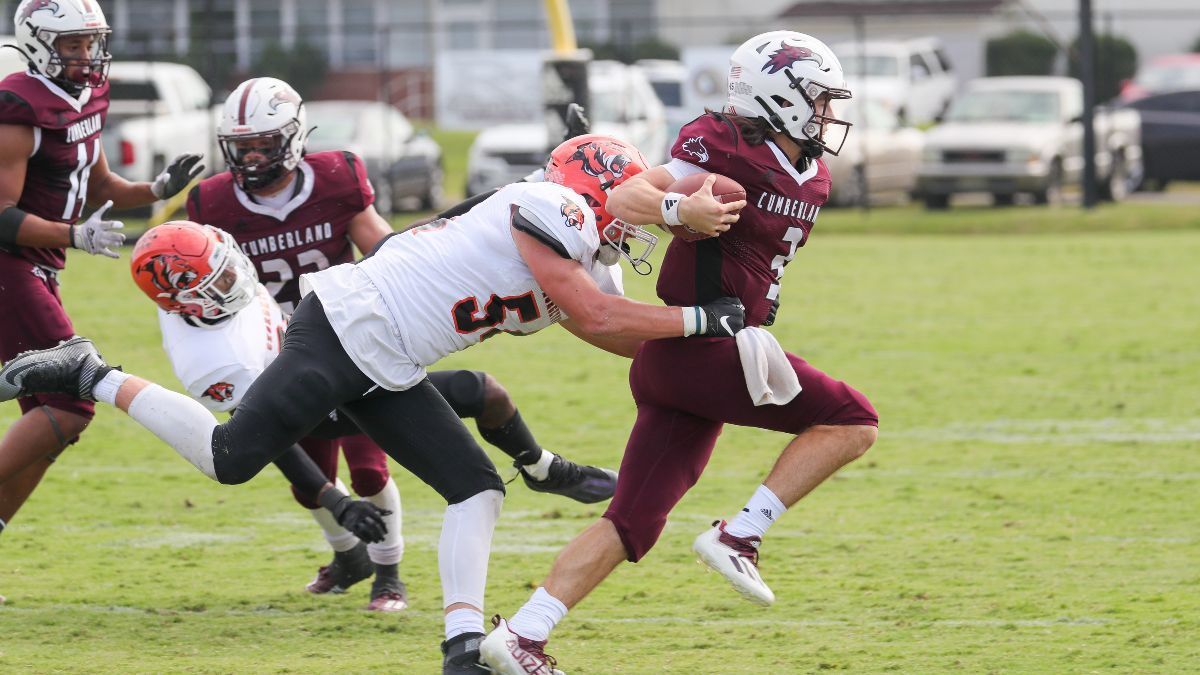 Cumberland (2-2, 0-2 MSC) struggled to get in rhythm offensively as they found ways to move the chains, but drives stalled out each time. Cumberland totaled 17 first downs in the game, but could not find themselves in plus territory. The Phoenix totaled 248 yards of total offense with a balanced 125 passing and 123 rushing.

Quarterback Luke Holloway completed 14-of-29 passes for 125 yards with one interception and also led the Phoenix in rushing with 43 yards, many coming after the pocket collapsed and evading sacks. Running back Treylon Sheppard picked up 40 yards on the ground. Joe Johnson hauled in six catches for 63 yards and Jaylen Taylor caught five passes for 41 yards.

Ismail Abdul-Qawee led the Phoenix in tackles with 10 tackles and four for a loss. Travis Woodall had seven and Ryan Brown had six.

Georgetown (4-0, 2-0 MSC) produced 320 yards of total offense with 133 on the ground and 187 through the air. Starting quarterback Drew Hartz completed 12-of-21 passes for 71 yards and a score. Darius Neal had 11 carries for 87 yards. LaDarion Montgomery took a reverse for 24 yards to the house just before the half ended. Aaron Maggard caught four passes for 53 yards.

Cumberland received the opening kick-off and moved the chains five times as Holloway connected with Taylor once and Johnson twice. Brandon Edmondson also rushed for 12 yards on a keeper, but the Tigers defense stood tall on fourth and short forcing a turnover on downs.

The Tigers answered after the turnover with a 10 play drive converting on fourth and one to extend the drive and allow Hartz to find Dillon Warren for a 5-yard touchdown strike and a 7-0 lead.

After a Phoenix punt, the Tigers had another long drive that took up five minutes of clock that ended with a 33-yard field goal by Chris Cline to extend the lead to 10-0 early in the second quarter.

Georgetown added one more score in the half when they took over at their own 46-yard line with 40 seconds left. After three completed passes by Hartz to get all the way down to the 24-yard line. The Tigers then took a timeout with 12 seconds left. Moving everyone to the wide side of the field the Tigers flipped a reverse to LaDarion Montgomery and Montgomery got outside of the Phoenix defense and scampered in to take a 17-0 lead into the break.

The Tigers would score once more in the fourth quarter as backup quarterback Gehrig Slunaker found Aaron Maggard for 14 yards and then threw a 41-yard strike over the top to JC Shegog for the final score of the game making the final score 24-0.

Cumberland will be on the road next Saturday, October 1 at the University of the Cumberlands. Kickoff is set for 6:00 p.m. central time/7:00 p.m. eastern time in Williamsburg.