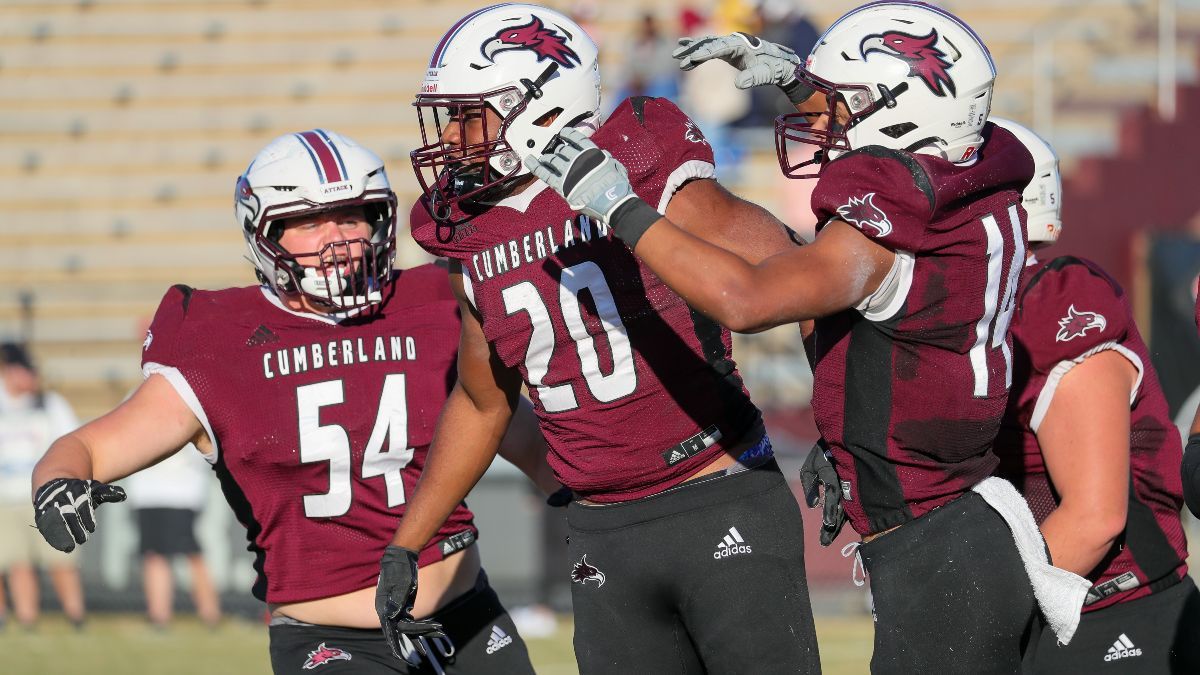 Team celebrates with JJ Johnson following a touchdown in the 65-22 win over Campbellsville. (Credit: Steve Wampler)
Campbellsville at Cumberland | October 08, 2022

LEBANON, Tenn.--Cumberland sets the record for points in a game since the resurgence of the football program in 1990 posting 65 points in a big homecoming win over Mid-South rival Campbellsville for their first conference win. Prior to the start of the game Tim Tebow spoke to a full crowd of 4,172 people at Nokes-Lasater.

Cumberland (3-3, 1-3 MSC) had everything rolling offensively tonight scoring 55 points in the first half. The Phoenix posted 678 yards of total offense with 331 on the ground and 347 through the air. Quarterback Luke Holloway had a big game throwing for five touchdowns on 20-of-30 passes for 325 yards. Treylon Sheppard and Nick Burge both ran for over 100 yards and a score to lead the ground attack. Jaylen Taylor hauled in three touchdown catches, all in the first quarter, on eight receptions for 94 yards. Bryson Hill caught five passes for 80 yards and a touchdown and Elijah Gaskin had four and a score.

The defense registered four takeaways in the game that set up quick scores in the first half. Braden Barnes led the team in tackles for the second straight game with eight. Soloman Maosa and Jalen Brown each added seven tackles. Ryan Brown forced two fumbles and Trevor Griffin had an interception. Jalen Brown recorded three sacks.

The game was out of hand rather quickly as the Phoenix 34 points in the first quarter on a combination of scoring quickly and the defense getting the ball back quickly via turnovers or short drives. The offense continued to roll in the second quarter adding 21 more points before letting the backups get time in the second half.

The first play from scrimmage for the Tigers, Ryan Brown blew up Luke Sheppard to force a fumble recovered by CU at the Campbellsville 42-yard line. Eight plays later, Holloway threw a 17-yard touchdown pass to Taylor for his second touchdown and a 13-0 lead.

The next Phoenix possession, Hollow found Taylor for his third score of the game and a 20-0 lead.

To start the second quarter, the Tigers finally forced Cumberland to punt for the first time and Ryan Brown delivered another big blow and Cumberland jumped on it at the 15-yard line. After a half the distance to the goal penalty, JJ Johnson scored his first touchdown as a Phoenix from seven yards out to extend the lead to 41-0.

After a Campbellsville touchdown, Burge found paydirt on an 11-yard touchdown rush to extend it to 48-7 in the second quarter.

The Phoenix would tack on one more touchdown before the break on a one play 60-yard touchdown by Hill for a 55-7 halftime score.

In the second half, Hunter Mathis added a 25-yard field goal and in the final minute of the game Timothy Freel broke loose on a kickoff to go 96 yards for the touchdown to break the modern day record for scoring at 65. The previous record was 64 points in a win over Tusculum back in 1996.

The Phoenix are set to take on Thomas More next Saturday on the road in Crestview Hills. Kickoff is set for 12:30 p.m. pregame coverage will begin on WANT FM 98.9 and WCOR AM 1490 at noon.