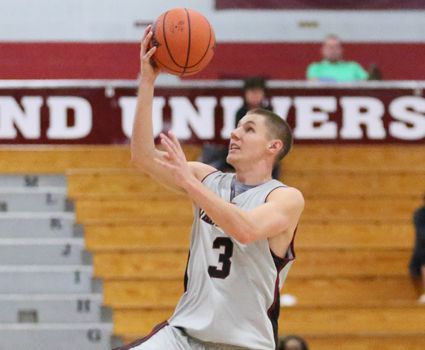 LEBANON, Tenn. – In its season opener, the Cumberland men’s basketball squad wasted no time adjusting to a new year as the Bulldogs opened up a 10-0 lead and never looked back, cruising to an 82-55 victory over Oakwood on Tuesday night at the Dallas Floyd Recreation Center.

Guards E.J. Perry and Josh Wilkerson each scored a team-high 17 points in the contest. Perry hit three of the Bulldogs’ 10 three-pointers while Wilkerson added two of his own. Freshman Marquel Hickerson brought down a game-high eight rebounds.

The Bulldogs (1-0) shot just 37.5 percent from the floor in the second half, but had opened up a large enough lead to keep the game out of reach. Solid free throw shooting also helped to ease the cold hands. CU sunk 22-of-24 from the charity stripe during the game, including hitting 18-of-20 in the second half.

Following a pair of free throws to open the first half, Alex Flagler and Wilkerson each hit from behind the arc. A jumper from Moritz Dern found nothing but net and put the Bulldogs ahead, 10-0.

Already leading 32-16 with just 4:12 left in the half, Cumberland exploded for 12 straight points, capped by a pair of Perry fast break layups to remove any doubt from the contest.

Oakwood (0-4) was not content to go away in the second half, opening with a 12-3 run over the first six minutes thanks, in part, by a 1-for-8 performance by the Bulldogs in that time frame. CU continued to struggle offensively in the second half until around the 8:30 mark in the game.

A Flagler layup answered an Oakwood three-pointer and sparked what would be a 10-0 run over the next four minutes. The Atlanta, Ga., native hit a jumper which was followed by a steal from Terry Williams who fed Hickerson for the finish. Four free throws handed the Bulldogs a 23 point advantage with four minutes to play.

Cumberland will not enjoy a long break between contests as the squad now shifts gears to Thursday nights’ home contest against Mid-Continent. Tip-off against the Cougars is set for 7 p.m. at the Dallas Floyd Recreation Center.