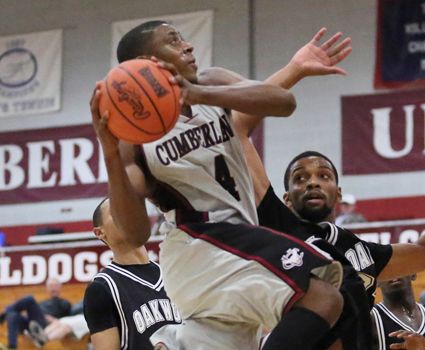 The Bulldogs (9-0) remained undefeated but not without angst, as a jump hook from Walt Andrews with exactly five seconds left in regulation gave the Wildcats (9-4) a 72-70 advantage. But Alex Flagler raced up the floor with the ball and found McFadden streaking to the hoop along the baseline. The junior was fouled and in his first game of the season, calmly nailed two foul shots with 0.4 seconds left to send the game to overtime.

Hickerson took over from there, hitting a long 3-pointer as the shot clock was set to expire before nailing another trifecta from the top of the key. He added a baseline runner off the glass and then one free throw with 9.3 seconds remaining. He missed the second free throw though, giving Bethel one last chance, but Justin Williamson’s 3-pointer from the corner didn’t hit anything and the Bulldogs survived.

McFadden had Cumberland’s only other points in the extra period, hitting two free throws in four chances. The contest featured 13 ties and 17 lead changes, most of them in the first half before CU used a 15-7 spurt to end the period. The Bulldogs led most of the second half, though the Wildcats pulled in front with a 12-3 run just after the intermission.

Andrews was almost too much for the Bulldogs to handle in the paint, with the senior leading five Bethel players in double figures with 19 points. He started the final push with a bucket underneath and Williams added a layup plus the foul, cutting the CU advantage to 70-66. Williams added two foul shots before Marcus Bowins made two more at the charity stripe, but the Wildcats struggled at the free throw line for the game, connecting on just 22-of-36.

Bowins’ two shots tied the game at 70 and after the teams traded turnovers, Gude’s 3-pointer near the end of the shot clock was no good, setting up what looked to be the final shot for Bethel. Andrews took the feed in the paint and hit the six-foot hook shot before the final heroics from McFadden helped Cumberland remained among the likes of the undefeated.

Flagler finished with 14 points and Josh Wilkerson added 12, both off the bench. Kenneth Stripling posted 10 points and four assists but battled foul trouble most of the second half. Moritz Dern led the Bulldogs on the glass with nine rebounds before fouling out.

Williams registered 16 points for the Wildcats, while Gary Pollard added 13 points and Cole Nelson had 11. Williamson posted 10 points as well despite not playing the first half, and Bowins scored just four points but grabbed 16 boards.

Neither team was able to pull away in the first half, with nine ties and 11 lead changes in the opening 20 minutes. The Wildcats held the biggest advantage most of the period (4 points) until a late run by the Bulldogs.

Cumberland put together an 8-2 spurt over a three-minute stretch in the latter stages of the half, with the last six points coming from Stripling. The senior drove to the basket, drew the contact and knocked down the hoop-and-some-harm for an old-fashioned 3-point play. The next time down the floor he nailed a trifecta near the top of the key for a 32-26 advantage with 4:31 left in the period.

Wilkerson’s 3-pointer from the corner with three seconds left in the half pushed the lead to 39-31 at the break, with Wilkerson contributing a team-high 10 points in the period. The Bulldogs got 22 points off the bench in the opening 20 minutes, including six from Flagler and four by McFadden to go with Wilkerson’s 10.