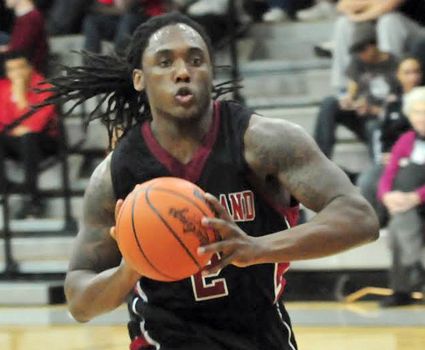 CAMPBELLSVILLE, Ky. – Cumberland faced a 5:18 stretch without a field goal late in the second half as the stretch turned a 55-52 Bulldog lead into a 72-59 loss to Campbellsville University in men’s basketball action here Saturday at the J.K. Powell Athletic Center.

Junior Josh Wilkerson connected from three with 7:32 remaining in the second half to give Cumberland its first lead since a 2-0 advantage in the opening seconds, and freshman Marquel Hickerson followed with a bucket at the 6:41 mark to give the Bulldogs a 55-52 advantage.

It would not be until the 1:23 mark, with the game well in hand for the Tigers, that DeMario Frazier hit a layup to end the drought. Over that span, Campbellsville used a 13-2 run to assume control.

Senior Lamar Brinkley tied a season-high with 15 points on 6-of-13 shooting, as Alex Flagler, Hickerson and Wilkerson each added 11 more. Brinkley tacked on eight rebounds in the game.

Cumberland shot just .377 (23-of-61) from the floor, but remained in the contest thanks to 17 turnovers by Campbellsville which led to 22 Bulldogs points. After enjoying a 17-11 rebounding margin at the half, Cumberland was outrebounded 20-12 in the second half.

Cumberland had little business keeping the score close in the opening half as Campbellsville shot 57.1 percent in the opening frame compared to the Bulldogs’ 37.9 percent clip. However, nine offensive rebounds and 13 points off turnovers kept the game within reach.

Leading 22-21 with 5:06 in the first, the Tigers reeled off a 9-0 run to jump ahead by 10 forcing a timeout from coach Lonnie Thompson at the 2:19 mark. Out of the break, it took Cumberland just nine seconds to score as Alex Flagler found DeMario Frazier on the back side for an easy layup.

That bucket would begin to turn the tides as the Bulldogs answered with their own 8-0 to close the half. After a layup from Lamar Brinkley, Flagler scored the final four points of the opening 20 minutes. After a free throw, the 5-foot-9 sophomore connected from three with just 35 seconds remaining.

Josh Wilkerson led the way for Cumberland at the break with eight points and Flagler added nine. Brinkley was tops on the boards for the Bulldogs, pulling down six caroms, including four on the offensive side, in the opening half.

The Bulldogs now return home to the Dallas Floyd Recreation Center for a Thursday matchup against No. 3 University of Pikeville. Pikeville, ranked No. 1 in the country at the time, ousted the Bulldogs 82-68 on January 4 in the first matchup this season. Tip-off for Thursday’s game is set for 8 p.m.