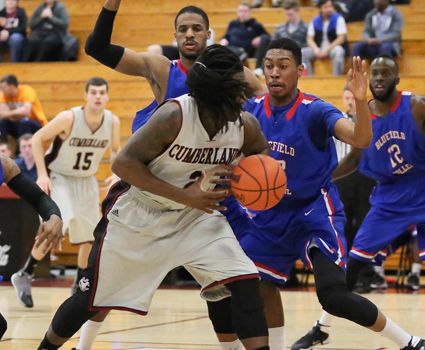 COLUMBIA, Ky. – Lindsey Wilson’s D’on Hall connected on a three-pointer with 0.7 seconds on the clock as the Blue Raiders pulled out the improbable win, 66-64, over Cumberland in men’s basketball action here Thursday night at the Biggers Sports Center.

CU’s Kenneth Stripling scored a go-ahead layup with 10 seconds remaining to give the Bulldogs a 64-63 advantage, setting up the final play. Following three straight timeouts by the Blue Raiders, Hall hit from the right wing. The bucket marked his 25 point of the night.

Senior Lamar Brinkley led the way for the Bulldogs with a season-high 16 points and pulled down nine rebounds while junior Moritz Dern notched 11 points and five caroms.

It took the Bulldogs 2:40 to score to open the game, but, trailing 3-0, CU used an 11-0 run over the next three and a half minutes to force a Lindsey Wilson timeout. Following a two from Marquel Hickerson and a trey from Dern, Brinkley netted the next four points before Josh Wilkerson connected on a fast break layup to cap the run.

LWC fought from behind for much of the rest of the period, taking its first advantage with a bucket plus one from Keshaun Mayfield just before the second media break. With 6:07 remaining in the half, the Blue Raiders held a 20-18 lead.

The two squads passed the lead back-and-forth three times over the final six minutes, locking even on three occasions as well. Much of Cumberlands damage came from the free throw line as the Bulldogs connected on 5-of-6 from the charity stripe in the final minute.

The Bulldogs spread the wealth in the first half as eight players tallied at least a point. Hickerson led the way with six points on 2-of-4 shooting and Dern netted five, hitting his lone shot from behind the arc and connecting on a pair of free throws. At the break, Cumberland and Lindsey Wilson were knotted at 31.

CU shot 52.4 percent (11-of-21) in the opening stanza, hitting 2-of-5 from behind the arc and, perhaps most importantly, 7-of-9 from the free throw line. Lindsey Wilson struggled, shooting just 40.7 percent (11-of-27), but recorded eight offensive rebounds in the process.

With 2:55 left in the first half, Cumberland would take its final lead for the next 20:25 in the game. That lead would come at the 2:30 mark. Trailing by four Alex Flagler hit from behind the arc and was fouled. After missing the free throw, Brinkley snagged the rebound and made the layup to give the Bulldogs the 60-59 advantage.

CU turned the ball over just eight times in the contest but lost the rebounding battle 30-26. The Blue Raiders pulled down 13 offensive caroms in the game.

The Bulldogs enjoy a week off before returning to action next Thursday at the University of the Cumberlands. UC bested the Bulldogs in a tight 55-52 game on January 25 at the Dallas Floyd Recreation Center.