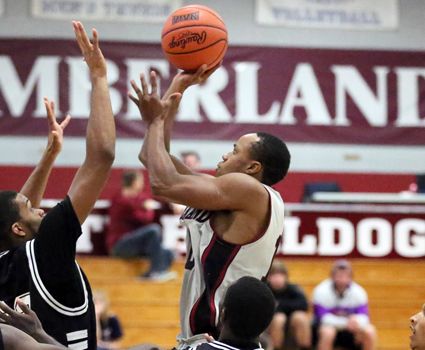 GEORGETOWN, Ky. – Jaylen Daniel scored 24 points and Monty Wilson added 13 points and 11 rebounds, as 16th-ranked Georgetown College used a 16-4 spurt at the end of the first half to take control en route to an 81-59 victory over Cumberland here Saturday in men’s basketball action at Davis-Reid Alumni Gymnasium.

Kenneth Stripling was the only Cumberland (12-13, 4-12) player in double figures, finishing with 12 points, while E.J. Perry netted nine points, but the Bulldogs shot just 32 percent from the fiueld and 3-for-16 from 3-point range in the loss. CU missed numerous shots around the bucket, including at least six layups, negating any chance of making a comeback.

Georgetown’s 16-4 run at the end of the first half gave the home team a 38-25 advantage at the break and the Tigers opened the second half with a 10-2 spurt, including 3-pointers from Daniel and Wilson, giving GC a 48-27 advantage. An 8-2 spurt by the Bulldogs, including a pair of buckets by Stripling and a gigantic putback dunk from DeMario Frazier, cut the deficit to 56-43 with 11:15 remaining, but a pair of missed layups by Lester Gude and too many empty trips over the next four minutes allowed Georgetown to maintain the double-digit lead.

Corey Washburn had back-to-back field goals and Noah Cottrill’s consecutive 3-pointers were part of a 16-5 run by Georgetown that put the game away. The Tigers shot 58 percent from the field in the second half, including 5-of-9 from behind the arc.

The Bulldogs started fast, with Perry knocking down a 3-pointer and Stripling finishing twice around the rim for a 9-4 edge just over four minutes into the game. CU continued to lead at the first media timeout behind buckets from Frazier and DeQuan Bond, but a 3-pointer from Cottrill and two free throws by Daniel tied the contest at 17 with 7:35 left in the period.

Cottrill’s trifecta was the first lead of the game for the Tigers and Georgetown led 22-21 at the second media timeout of the half. The home team outscored Cumberland, 16-4, over the last 4:02 of the period, hitting all eight foul shots and getting a3-pointer from the corner by Russ Middleton with 7.8 seconds remaining, giving the Tigers a 38-25 advantage.

Daniel led all players with 11 points and Georgetown was 9-for-9 at the charity stripe, overcoming 10 turnovers. On the other hand, bad shots, missed layups and a couple of turnovers doomed Cumberland in the last 10 minutes of the half, with CU scoring just eight points after Moritz Dern’s putback at the 10:06 mark.

Frazier led the Bulldogs with six points and Perry added five, but the club shot just 32 percent from the field and 1-for-8 from 3-point range.

Cumberland plays its final two home games of the season next week, taking on Shawnee State on Thursday at 8 p.m. and the University of Rio Grande on Saturday at 4 p.m. Senior Day activities will take place for five seniors before the game on Saturday.