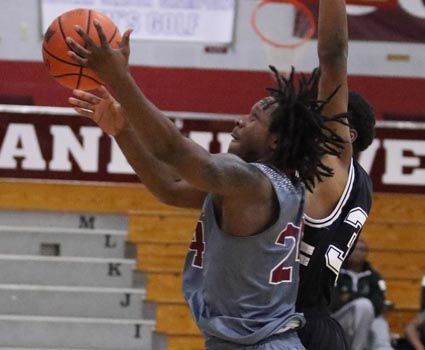 LEBANON, Tenn. – Life University broke open a close game with a 19-5 run and lived up to the nickname, the Running Eagles, in an 87-70 victory over Cumberland here Saturday night in men’s basketball action at the Dallas Floyd Recreation Center.

The Bulldogs (3-2, 0-1 Mid-South) overcame a 13-point first-half deficit to take the lead but trailed by seven at the break. CU was down just 54-48 after a DeMario Frazier layup with 13:42 remaining, but Life ran away from Cumberland over the next five-plus minutes, with consecutive 3-pointers from Jonathan Beausejour the real back-breakers.

Caleb Hayes began the run with two field goals and Travien Geter finished the spurt with another trifecta for the Running Eagles (3-1, 2-0). The Bulldogs were 2-for-7 from the field with five turnovers during the stretch.

Life pushed its lead to as many as 24 points later in the period and was in stall mode for the final three minutes.

Frazier was about the lone bright spot for the Bulldogs, posting 22 points and six rebounds and hitting 9-of-10 shots from the floor while the rest of the club made only 17-for-50. Josh Wilkerson and Cameron Prather both finished with 10 points, but Wilkerson and Tylor Owens combined for 14 turnovers against Life’s pressure, part of 25 miscues for Cumberland as a team.

Hayes and Justin Perry each netted 19 points and Joe Wilbert added 12 for the Running Eagles, who shot 50 percent for the game and were 4-for-5 from behind the arc at one point of the second half.

Life scored the first six points of the game and after the Bulldogs hit a pair of field goals, the Running Eagles ran off seven straight for a 13-4 lead and causing a CU timeout. Perry scored eight points during the stretch and added another field goal, as Life stretched the advantage to 17-4 with 13:56 left in the half.

Slowly the Bulldogs got back into the contest, taking advantage of eight Life turnovers over the three-minute stretch. Frazier’s layup and Wilkerson’s 3-pointer ignited a 17-5 spurt by CU. Frazier added two more buckets and Marquel Hickerson netted four foul shots. A goaltending call on the Running Eagles on a layup by Cameron Prather gave Cumberland a 24-23 edge with 6:41 left in the period.

Two free throws from Jerrod Gaston and one more by Frazier stretched the lead to 27-23, but Life answered with six quick points thanks to three Bulldog turnovers. A 3-pointer by Hayes put the Running Eagles ahead, 32-29, though two more foul shots from Frazier cut the deficit to one.

Ben Routh’s layup and a 3-pointer by Joe Wilbert just before the first-half buzzer gave Life a 43-36 lead at the break.

Frazier and Perry led all players with 14 points apiece at the break. The game featured 35 turnovers and 25 fouls in the half, with CU staying in the contest by hitting 13-of-18 at the foul line.

Cumberland hosts Freed-Hardeman at 8 p.m. on Monday before hitting the road for conference games next week at Georgetown College and Shawnee State.