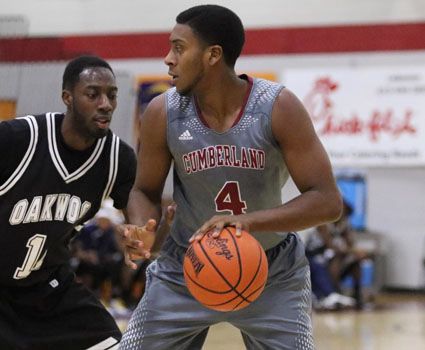 LEBANON, Tenn. – Marquel Hickerson netted 22 points and Josh Wilkerson collected 15, with the duo combining to make 17-of-20 at the foul line, as Cumberland started fast and then held on in the final minutes in a 74-68 win against St. Catharine College in men’s basketball action Thursday night at the Dallas Floyd Recreation Center.

The Bulldogs (5-5, 2-2 Mid-South) opened the game with a 22-5 advantage thanks to nine points from DeMario Frazier and just one field goal by the Patriots (2-8, 0-4). CU led 33-20 at the half and stretched the advantage to as many as 18 points early in the second period, including a pair of field goals by Hickerson.

Cumberland maintained a 60-47 lead with 3:53 remaining, at which point St. Catharine was 1-for-13 from behind the arc, but the Patriots sank consecutive 3-pointers, one each from Aishon White and Lorenzo Dewberry, cutting the deficit to 60-55 with 2:36 remaining.

The Bulldogs connected on 15-of-18 free throw attempts in the final 4:30, including 6-of-8 by Hickerson and 5-for-6 from Wilkerson as well as 4-of-4 by Cameron Prather, whose putback plus the foul with 7:07 to play provided a big lift for the club.

Despite the free throw exploits, St. Catharine continued to bomb away, with Dewberry making two more before the Patriots attacked the basket. Dewberry made a layup plus the foul with 33 seconds remaining, trimming the CU lead to 69-64, and his layup in the final 10 seconds pulled SCC within 72-68, but Prather knocked down the final two foul shots to preserve the win.

It marked the first 20-point game for Hickerson since February 6, 2014, versus the University of Pikeville, when he scored a career-high 29 points. He hit 6-of-13 shots from the field and made a pair of 3-pointers as well.

Frazier finished with 11 points, all in the first half, and eight rebounds, while Wilkerson dished out four assists to go with his 15 points. Moritz Dern also provided six points and six boards before fouling out.

White led the Patriots with 23 points and Dewberry scored all 18 of his points in the second half.

Cumberland netted the first eight points of the contest, including a 3-pointer by Uros Benacek on the opening possession of the game. Frazier made a layup and then another plus the foul for the quick start. Another layup by Frazier and then a strong move on a pick-and-roll for a bucket by Dern extended the lead to 14-3.

Hickerson’s steal and dunk gave CU a 16-3 advantage, with the Patriots missing their first five shots and posting three turnovers in the first five minutes of the game. Keith Coleman’s dunk got SCC off the schnide, but Dern’s second layup and two free throws from Hickerson made it 20-5 for the Bulldogs.

Julito Hutchinson’s layup, two foul shots by White and then a layup plus the foul from White cut the deficit to 24-14 with 4:13 left in the period. DeQuan Bond’s jumper ended the 7-0 spurt by the Patriots and Hickerson followed with a 3-pointer before a layup by Wilkerson pushed the lead back to 17.

White and Nick Porter scored the final two buckets of the half for St. Catharine and Khalil Murphy’s 3-pointer at the buzzer nearly fell, but the Bulldogs took a 33-20 lead at the break.

Frazier netted 11 points and grabbed six rebounds, but the Patriots were just 6-for-22 from the field with 10 turnovers, which CU turned into 13 points.

Cumberland takes on 19th-ranked Campbellsville University at home this Saturday at 4 p.m.