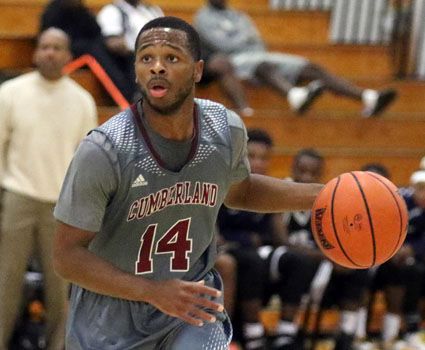 LEBANON, Tenn. – Nineteenth-ranked Campbellsville made 13 3-pointers with four each from Rob Robinson and Miles Rice and never let Cumberland in the game, posting a 73-59 victory over the Bulldogs on Saturday in men’s basketball action at the Dallas Floyd Recreation Center.

The Tigers (12-1, 5-0 Mid-South) made six trifectas in the first half, including one from Darius Clement just before the halftime buzzer, taking a 36-20 advantage at the break. Campbellsville added seven more in the first eight minutes of the second half, giving the Bulldogs (5-6, 2-3) no chance at a comeback.

Campbellsville opened a 29-point advantage with the seven 3-pointers, the last one from Rice with 12:10 to play, starting the second half with a 27-14 run. Cumberland cut into the deficit with a 15-2 spurt, with Josh Wilkerson, Cameron Prather and Uros Benacek netting all of the points.

Prather hit a 3-pointer and had a tip-in while Benacek also made a trifecta and he and Wilkerson both had old-fashioned 3-point plays. Benacek’s 3-pointer with 4:35 remaining cut the deficit to 65-52 and Prather’s third triple of the second half made it a 12-point game with just under two minutes remaining.

Prather netted 13 points, all in the second half, while Benacek added 10 points and Wilkerson finished with nine after leaving the court in the first half with an injury. Marquel Hickerson also scored eight points and DeMario Frazier led the club with seven rebounds.

Damontre Harris led the Tigers with 14 points, 11 boards and three blocks while three Campbellsville players – Campbell, Rice and Rob Robinson – each scored 12, with the trio hitting 10 of the team’s 13 trifectas in the contest. Eric Gaines also scored 10 points and Campbell handed out eight assists.

Campbellsville scored the first nine points of the game with a dunk and short jumper from Harris as well as a 3-pointer by Campbell, but the Bulldogs got a layup by Benacek on a nice pass from Frazier and a 3-pointer by Hickerson to cut the deficit to four. Rice’s trifecta with 13:19 left in the opening period gave the Tigers a 16-5 advantage.

Robinson’s first triple of the contest stretched the lead to 14 and Clement’s three from the corner just before the halftime buzzer put Campbellsville ahead, 36-20, at the break.

The Bulldogs shot just 27 percent in the half and committed eight turnovers, with several shots altered by the 6-foot-10 Harris.

Cumberland plays again next Saturday at Bethel University at 4 p.m.