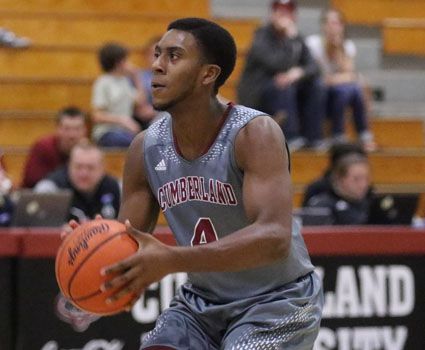 The Bulldogs (5-7) led by as many as 13 points in the first half and took a 32-29 advantage to intermission. The second half featured five ties and nine lead changes, the final one on Hardy’s basket in the last second of the contest.

Josh Wilkerson posted 13 points and DeMario Frazier and Telvin Wilkerson each netted 11 for Cumberland, who shot 46 percent from the field in the contest, including 6-of-14 from 3-point range, and committed only 10 turnovers.

Uros Benacek hit a pair of 3-pointers during a 12-2 Bulldog spurt during the first half. Josh Wilkerson’s field goal ended the run, giving CU a 21-8 advantage with 9:54 remaining in the period.

Cumberland maintained a double-digit lead until Bethel’s Mark Vaughn made two foul shots with 3:49 left in the half. Krys Renfrow hit consecutive trifectas for the Wildcats and Hardy’s bucket at the 2:21 mark cut the Bulldog lead to 27-26.

Jerrod Gaston made two free throws with 1:12 remaining before the break before a 3-pointer by Telvin Wilkerson pushed the advantage back to five, but Jonathan Williams got an offensive rebound and putback just before the halftime buzzer for the home team.

The lead went back-and-forth in the first five minutes of the second half before a basket and then two free throws by Hickerson gave CU a 39-35 advantage. Hardy’s two foul shots and then a 3-pointer from Justin Williamson made it a one-point edge for Bethel.

Telvin Wilkerson’s 3-pointer gave the Bulldogs the lead again and another trifecta by the junior made it 54-48, Cumberland’s biggest edge of the second half. An old-fashioned 3-point play by Josh Wilkerson kept the lead at five, but the Wildcats reeled off eight straight points.
Cole Nelson’s field goal and an old-fashioned 3-point play by Hardy tied the game at 57. Marcus Bennett made two foul shots and Vaughn hit 1-of-2 for a three-point with 2:57 remaining.

Frazier cut the deficit to one with a field goal and Gaston’s two free throws gave the Bulldogs a one-point edge, but Hardy answered with two foul shots and Renfrow added another one, but Hickerson’s bucket tied the game in the final 30 seconds.

Hardy took an inbounds pass under the Cumberland basket with six seconds remaining and dribbled the length of the floor for the final shot.

Hardy hit 10-of-16 shots and was the only Wildcat in double figures, finishing with 25 points. Vaughn finished with nine points and Justin Williamson and Renfrow each netted seven.

Cumberland plays again Wednesday at Martin Methodist and next weekend at the Roadrunner Booster Club Classic in Dalton, Ga.