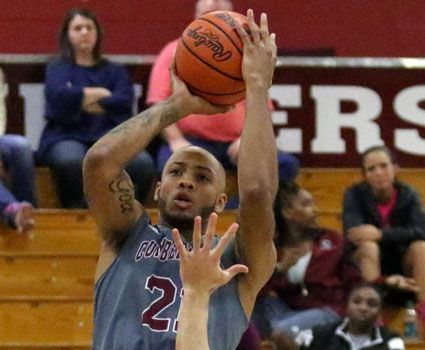 The Bulldogs led 28-16 at the half thanks to an 11-0 run over the final four minutes of the period, but poor shooting and turnovers allowed the Bears to start the second half with a 21-7 run. Sean Elliot’s 3-pointer tied the game at 35 and a layup by Nick Gouch gave the visitors a 37-35 advantage with 11:54 remaining in the contest.

From there the teams went back-and-forth, with a 3-pointer from the corner by Paul Williams, knotting the score at 40 and ending a seven-minute drought without a field goal. Nick Tingle’s layup put SSU back ahead, 45-43, but Cumberland answered with a 7-0 spurt to take the lead for good.

Williams was fouled with 5:01 to play and made the first free throw but missed the second. Josh Wilkerson got the offensive rebound, made the putback and was fouled, extending the lead to 54-47.

Elliot continued to keep his team in the game with long-range shots, hitting his fifth 3-pointer of the contest with 3:51 to play, cutting the CU advantage to four. Telvin Wilkerson started the free throw parade for the Bulldogs on the next possession and Marquel Hickerson hit all six of his attempts in the final two minutes.

Even with all of that, Shawnee State continued to inch closer, with Gouch and Tingle both making layups before a 3-pointer by Devon Carter with 34.3 seconds remaining making it 63-61 Cumberland. Telvin Wilkerson added two more foul shots with 30.6 seconds, but Tingle’s layup with 23.6 seconds left cut the lead back to two.

Telvin Wilkerson made just 1-of-2 at the charity stripe with 15.1 seconds to play, leaving the door open, but the Bulldogs forced a tough 3-pointer by Elliot. Prather grabbed the rebound and sank the second of two free throws with 2.6 seconds remaining, sealing the victory.

Elliot led all scorers with 21 points and Tingle finished with 15, as the Bears shot 74 percent from the field in the second half.

Alex Flagler paced the Bulldogs with 11 points, including nine in the first half, and Williams added 10. Josh Wilkerson scored seven of his nine points in the second half as well.

The Bulldogs took an early 6-2 advantage thanks to a pair of layups from Flagler and DeMario Frazier’s bucket with 10:47 left in the opening half made it a 9-6 CU edge, but the Bears netted the next five points, all from Elliot, for a 10-9 lead midway through the period.

Prather hit a pair of 3-pointers with a run-out layup from Josh Wilkerson in-between for a 17-12 CU lead with 7:04 left in the period, but Tingle’s layup pulled SSU within a point just over a minute later.

A 3-pointer from the wing by Uros Benacek at the 3:43 mark started an 11-0 run to end the half by the Bulldogs, with Williams and Flagler adding trifectas before Jerrod Gaston’s tip-in in the final minute, giving Cumberland a 28-16 advantage at intermission.

The Bulldogs were 5-of-10 from behind the arc and just 6-of-19 from inside the 3-point line but committed only three turnovers and also grabbed five offensive rebounds, turning those into five second-chance points. CU also forced 10 SSU miscues in the period, converting those into nine points.

Cumberland plays at home Saturday on Senior Day, hosting Georgetown College at 4 p.m. Five players will be honored along with the women’s seniors before the men’s game.