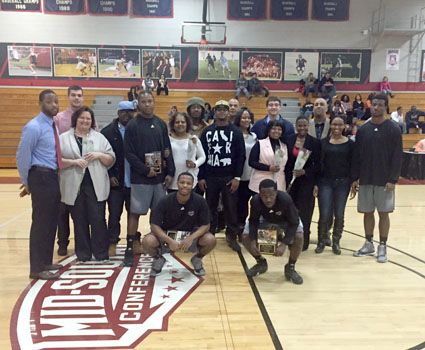 LEBANON, Tenn. – Cumberland’s Marquel Hickerson forced overtime with a 3-pointer with 2.9 seconds remaining, but ninth-ranked Georgetown College overcame a 14-point second-half deficit and Corey Washburn hit a pair of jumpers in overtime to help the Tigers claim a 91-87 victory over the Bulldogs here Saturday in men’s basketball action at the Dallas Floyd Recreation Center.

Deondre McWhorter scored 15 points over the final 15 minutes, including three straight to tie the game. The Tigers were also 11-for-16 at the foul line during that stretch, including 8-of-8 over three minutes in the middle of the period.

Trailing by 14, Georgetown put together a 13-3 stretch to cut the deficit to four, with Mike Walker scoring one field goal and hitting two free throws and McWhorter adding seven points. Paul Williams’ drive to the basket plus the foul and a jumper by Uros Benacek pushed the lead back the nine for CU, but six consecutive foul shots by the Tigers made it a 3-point game with 7:46 remaining.

Josh Wilkerson’s 3-pointer from the corner extended the advantage back to six, but that’s when McWhorter took over with a dunk and three baskets with a Noah Cottrill 3-pointer in-between. McWhorter made 1-of-2 free throws and Cottrill added two more at the charity stripe for an 81-78 edge for Georgetown, but Hickerson’s fourth 3-pointer of the game with 2.9 seconds left sent the contest into overtime.

McWhorter’s putback dunk, a layup by Domonique Bull and Washburn’s first 15-footer gave the Tigers an 87-82 advantage in the extra period, but again the Bulldogs battled back. Williams made a driving layup before Benacek’s 3-pointer from the corner tied the game at 87 with 1:52 remaining.

Washburn’s second jumper put Georgetown back ahead for good and Bull and Cottrill each made 1-of-2 foul shots, Cottrill’s with 3.2 seconds remaining that iced the win for Georgetown. The Bulldogs missed a pair of 3-pointer and McWhorter blocked a layup in the final 90 seconds.

Cottrill led all scorers with 30 points, hitting 5-of-8 from behind the arc and 11-of-12 at the foul line. McWhorter finished with 29 points, 13 rebounds, three blocks and three assists, while Mike Walker added 12 points off the bench.

Hickerson and Josh Wilkerson each netted 17 for Cumberland, combining to make 8-of-12 from 3-point range. Telvin Wilkerson netted 14 points and Williams had 11 points and six boards, also off the bench.

The Bulldogs started quickly with a layup by DeMario Frazier and two 3-pointers by Hickerson for an 8-0 advantage just over two minutes into the contest. Jumpers from Frazier and Hickerson and a layup by Telvin Wilkerson pushed CU ahead, 17-7, with 14:25 left in the opening period.

Telvin Wilkerson added a bucket and the foul at the 12:34 mark, then two free throws and another short jumper off the glass for a 25-14 lead. Layups by Josh Wilkerson and Hickerson kept the advantage at double figures and Hickerson’s third trifecta of the half gave Cumberland a 36-22 lead at the 5:57 mark.

Cottrill answered with his own 3-pointer and two free throws by McWhorter and a layup by EJ Sandoval cut the deficit to seven, but Cameron Prather answered for CU with another three. Five foul shots by Cottrill in consecutive possessions made it a five-point game with 1:31 left in the half, but Josh Wilkerson nailed a 3-pointer in the corner just before intermission.

Hickerson and Telvin Wilkerson combined for 23 points in the period while Cottrill netted 17 for the Tigers.

Cumberland travels to Life University next Thursday before finishing the regular season at home versus Lindsey Wilson on February 26.