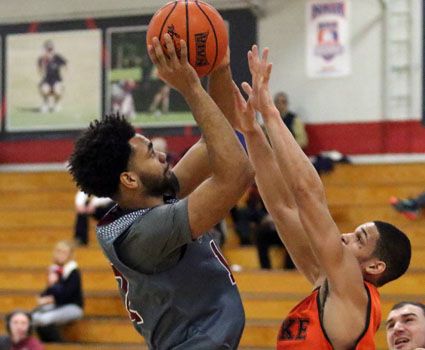 MARIETTA, Ga. – DeQuan Bond scored a career-best 16 points, DeMario Frazier added 19 points and Josh Wilkerson netted 17, but Cumberland was never able to climb out of a 13-point halftime deficit, pulling within one twice before falling 102-94 to Life University here Friday night at The Eagles’ Nest.

Allen Dantzler, who finished with a game-high 23 points, hit a 15-footer and then had a layup plus the foul. Travien Geter drove for a layup and Caleb Hayes nailed a 3-pointer for a 93-83 Life advantage with 2:48 remaining.

Alex Flagler’s 3-pointer and a layup by Frazier in the closing seconds pulling CU within four with 18.2 seconds left, but a foul and then a technical on Frazier, with Hayes hitting all four foul shots, sealed the win for the home team.

Cumberland trailed 46-33 at the break but scored the first six of the second half, but the Running Eagles answered with an 8-0 spurt for a game-high 15-point advantage. Dantzler’s field goal with 13:53 remaining made it a 15-point lead again for Life, but the Bulldogs put together a 15-3 spurt over the next four minutes.

Bond started the run with a 3-point play and hit a pair of 3-pointers during the stretch as well. Telvin Wilkerson’s layup with 10:24 to play cut the deficit to 68-65. Telvin Wilkerson’s trifecta from the top of the key pulled CU within 74-73 and Frazier’s reverse layup also made it a one-point game, but Geter answered with a triple for Life. The Bulldogs never got closer than two the rest of the way.

Telvin Wilkerson recorded 13 points for Cumberland and Frazier led the way on the board with eight.

Life had five players in double figures, with Hayes finishing with 18 points, including 10-of-15 at the foul line. Geter registered 14, Chevelan Pearson added 13 and Juwan Burden had 11.

Only two total points were scored in almost four minutes to start the contest, but Flagler’s run-out layup tied the score at 2-all with 16:22 left in the opening period. That opened up the offense and the Running Eagles were on fire the rest of the half.

Bond and Marquel Hickerson both hit 3-pointers and the Bulldogs trailed 19-16 at the first media timeout, but CU netted just one point over the next five minutes and Life took advantage with a 13-1 spurt. Jay Ellis and Pearson each posted two field goals and two foul shots during the run, giving Life a 33-19 advantage.

Consecutive buckets from Uros Benacek ended a five-minute stretch without a field goal for Cumberland Josh Wilkerson’s 3-point play cut the deficit to 34-25 with 4:30 left in the period, but Burden nailed a pair of trifectas in the final three minutes of the half and Allen Dantzler’s two layups in the last minute put the Running Eagles ahead, 46-33, at intermission.

Life didn’t miss much in the first half, hitting 18-of-33 shots overall and 5-for-10 from behind the arc. Burden hit three 3-pointers in the period and led all scorers with nine points while Pearson netted seven as well.

Benacek paced the Bulldogs with nine points, including a 3-pointer with 3:06 left in the half, but the Bulldogs were hurt by nine turnovers that Life converted into 14 points.

Cumberland finishes the regular season at home next Thursday against Lindsey Wilson at 8 p.m.