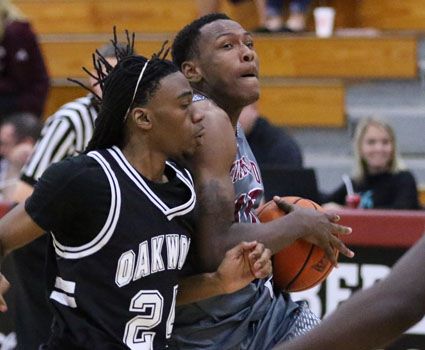 LEBANON, Tenn. – Cedric Nash posted 15 points and Devarus Craig added 10 off the bench, but 16th-ranked Columbia College used a 15-3 run midway through the second half to break open a close game in a 78-54 Cougars win Friday night in Columbia, Mo.

Cumberland trailed 37-31 at the half and 41-35 after a Nash bucket with 15:05 remaining, but Jackson Dubinski and Nic Reynolds each hit 3-pointers during the decisive run over the next five minutes. The Cougars stretched the lead to as many as 27 points on Chantel Stanciel’s trifecta with 4:17 to play.

Rockers led the home team with 17 points and a game-high 13 rebounds while Reynolds made six 3-pointers and finished with 23 points.

Marquel Hickerson’s 3-pointer gave the Bulldogs an early lead and Mark Brown’s triple put CU ahead, 13-9, seven minutes into the opening half. Columbia put together a 14-6 run over the next five minutes to take a 25-19 advantage.

The teams traded 3-pointers, including two from CU’s Ronell Abaekobe, but Rockers and Reynolds answered for the Cougars and a second triple from Reynolds made it 25-19 Columbia with 8:42 left in the first half. Two free throws by Nash pulled CU within 30-27, but the Cougars took a 37-31 edge to the break before the decisive run for the home team.