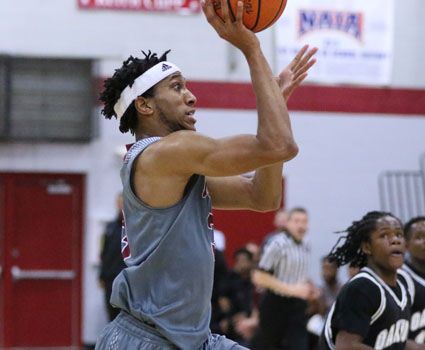 Arnold hit two of his five 3-pointers and added a field goal in the second overtime when Fisk (1-4) outscored the Bulldogs, 16-7. Brown and Hickerson both made trifectas for Cumberland early in the second OT, but a Brown free throw would account for the only other points in the extra period for CU (4-3). Cumberland was 0-for-6 with three turnovers over the final 3:50.

Field goals from Devarus Craig and Cedric Nash gave the Bulldogs their biggest lead of the game at 39-32 with 15:41 remaining in the second half, but Fisk answered with a 10-0 spurt that included a 3-pointer by Arnold and two trifectas from Pollard.

Hickerson’s free throw and Delaryn Dodd’s tip-in ended a four-minute drought and buckets from DeQuan Bond, Brown and Hickerson put Cumberland back ahead, 48-43. CU was up six on Nash’s layup before Quintavis Kelly’s field goal and Pollard’s 3-pointer cut the lead back to one with 5:27 remaining.

Arnold’s 3-pointer tied the game at 56 and Leonard Hall’s layup put Fisk in front, 58-56, with 1:30 to play, but Hickerson’s bucket just before the final buzzer in regulation sent to game to overtime.

Another Arnold triple put his team ahead, 65-62, with 34 seconds to play in the first overtime, but Brown answered right back with his own 3-pointer, sending the game into the second extra period.

Hickerson finished with 16 points, six rebounds, five assists and three steals in 44 minutes, as backup Jamonte Graham did not play for the third straight game. Ronell Abaekobe netted 10 points, all in the first half, and Craig posted 10 points off the bench for CU. Brown led the Bulldogs with seven rebounds.

Hall was the only other Fisk player in double-digits, registering 14 points and 11 rebounds, while Arnold handed out seven assists and LaBarron Collins grabbed 10 boards.

Abaekobe scored the first seven points of the game for Cumberland, but the first of Pollard’s four 3-pointers gave Fisk a 9-7 edge. The teams went back-and-forth most of the period, with CU’s biggest lead at 24-20 after a Brown 3-pointer, but Magic Harris answered with a triple for Fisk and Collins’ bucket giving the home team the lead. Abaekobe’s trifecta just before the half gave CU a 29-26 lead at intermission.