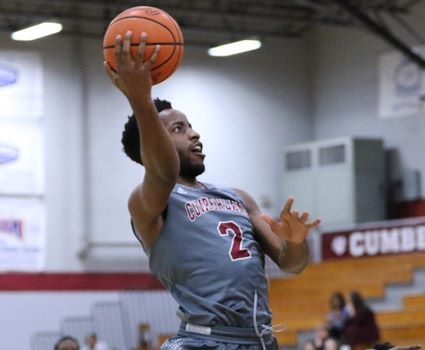 LEBANON, Tenn. – Orlando Bass netted 24 points and ninth-ranked Freed-Hardeman started the second half with a 27-10 run to blow open a one-point game in a 77-61 victory over Cumberland in men’s basketball action here Tuesday night at the Dallas Floyd Recreation Center.

FHU led 31-30 at intermission but started quickly in the second half, just as they did in the first meeting between the two teams a week ago. Eight players scored during the 27-10 spurt, with six points from Isaiah Harrison and five apiece for Austin Dempsey and Trevor Randolph.

Back-to-back 3-pointers from Bass, the second one with 6:56 to play, pushed the lead to 20. Cumberland made just 5-of-15 field goal attempts and committed five turnovers during the run as well.

Ronell Abaekobe posted 20 points and 12 rebounds in the game for CU and Mark Brown hit three 3-pointers and finished with 14 points. Devarus Craig added 12 points, with eight of those in the first half.

Fitzgerald Hopkins was the only other Lions player in double figures with 10 points, but Evan Forhetz and Randolph both netted eight points and Dempsey posted seven for FHU.

Two buckets by Craig and a 3-pointer from Abaekobe gave Cumberland an early 7-4 lead, but Bass answered with a trifecta for the Lions and the senior made an old-fashioned 3-point play for a three-point FHU edge.

The teams went back-and-forth, with Craig and Cedric Nash posting buckets for CU before layups by Abaekobe and Marquel Hickerson for a 15-10 Cumberland advantage. Another Hickerson layup kept the edge at five for Cumberland, but Freed-Hardeman put together a 9-2 spurt to retake the lead.

Hopkins made a 3-pointer and a layup before buckets by Bass and Forhetz put FHU ahead, 24-22, but Craig’s reverse layup tied the contest for the fourth time in the half. Brown’s stepback 3-pointer for the Bulldogs knotted the game at 27 and Abaekobe’s putback just before the half cut the Lions lead to 31-30 at intermission.

Abaekobe netted nine points and Craig added eight for CU, while Bass scored 14 of Freed-Hardeman’s 31 points in the half, hitting 4-of-9 field goals and 5-of-6 at the foul line.