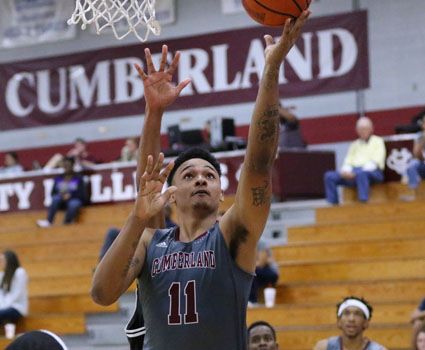 LEBANON, Tenn. – Devarus Craig registered his first double-double of the season with 21 points and 16 rebounds and Cumberland overcame a slow start to post a 76-70 over Fisk in men’s basketball action here Monday night at the Dallas Floyd Recreation Center.

Cumberland avenged an 81-72 double-overtime loss to Fisk from November 14 thanks to Craig’s big game and 19 points from Ronell Abaekobe, his second straight strong offensive output. CU shot 58 percent from the field in the second half and ended the first half with a 21-10 run to take their first lead of the game.

Cumberland led by as many as 16 points with just over six minutes to play, but Fisk put together an 18-8 run to pull within six with just under a minute remaining. Walter Arnold hit a pair of 3-pointers and Chris Pollard and Nathan Mungo added trifectas during the spurt as well, with Arnold’s second trey cutting the CU lead to 73-67 with 43 seconds remaining.

Abaekobe made the front end of the 1-and-1 and Craig hit two foul shots to ice the win, ending a five-game losing streak for CU.

Marquel Hickerson was the only other Cumberland player in double figures, recording 10 points, five boards and four assists, while Mark Brown finished with nine points for CU.

Cumberland started the game just 1-for-7 from the field and fell behind 7-0 and 11-3 thanks to six points from Pollard and a 3-pointer by Arnold. Hall’s trifecta for Fisk kept the lead at eight for the visitors midway through the opening period, but a layup and 3-pointer by CU’s Garrett Kirkland cut the deficit to 18-15.

Delaryn Dodd’s putback made it a one-point game, but Fisk answered with baskets from Pollard and Hall to keep the lead. A tip-in from Craig tied the game at 23 with 4:26 left in the period and Abaekobe took over from there, starting with a monster jam down the leftside for a 25-23 edge.

The junior tipped in his own miss, made a 3-pointer and a long two as well as another jumper, all in a three-minute stretch. Craig added a pair of field goals and Hickerson’s drive to the hoop in the final seconds before intermission ended a 21-10 spurt over the final five minutes and gave Cumberland a 40-32 advantage at the break.

Abaekobe hit 5-of-9 shots and all four free throws for 15 points in the half while Craig added nine points and 10 rebounds. Pollard scored 15 of Fisk’s 32 points while making 7-of-12 shots while his teammates were just 7-of-23 from the field.

Four players scored for Cumberland during a 21-13 surge in the second half, including six from Brown and five by Craig. Hickerson’s layup with 6:25 remaining gave CU a 65-49 advantage, but Fisk answered with the first of four 3-pointers to make the game close in the end.

Cumberland hosts St. Catharine College on Thursday at 8 p.m. and takes on 18th-ranked Campbellsville University at home on Saturday.