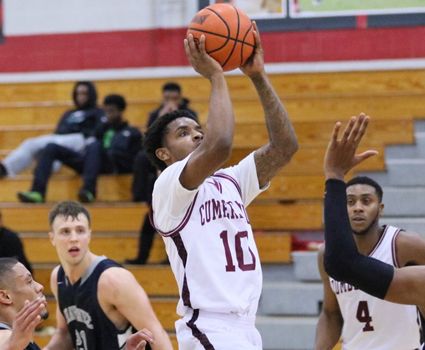 Cumberland (10-14, 3-8 Mid-South) held a 14-point lead midway through the first half, held a 38-28 advantage at halftime and maintained an eight-point edge with 4:38 remaining, but Ethan Moffatt’s 3-pointer cut the lead to five.

Two straight turnovers by the Phoenix opened the door for Carter, who drilled a deep three from straight away at the end of the shot clock and then another from the right wing to give the Bears (12-13, 6-7) a 60-59 advantage with 1:57 remaining.

Will Shelton missed a 3-point try for Cumberland at the end of the shot clock and Carter was fouled on the other end, knocking down both ends of the 1-and-1 for a three-point edge. Cameron Johnson, who finished with a team-high 14 points for CU, hit a floater in the lane to cut the deficit to one with 54.6 seconds to play.

Dante Dunston’s traveling call for the Bears gave Cumberland one last chance to Marquel Hickerson looked to be the hero again after hitting a 3-pointer at the end of regulation and banking in the game-winner in double overtime against Shawnee State on January 16. Hickerson’s drive to the goal bounced off the rim and Shelton’s tip also missed.

Moffatt grabbed the rebound and was fouled with 0.4 seconds to play. He made the first foul shot and missed the second on purpose, not allowing the Phoenix to take the ball out of bounds for one last heave down the court.

Carter finished with a game-high 20 points while Moffatt was the only other SSU player in double figures with 12. The Bears committed just six turnovers in the contest compared to 16 for Cumberland, including 11 in the second half, which Shawnee State turned into 17 points.

Mark Brown hit four 3-pointers in the first half but did not attempt a shot after the 8:09 mark of the opening 20 minutes. DeQuan Bond added 10 points and Hickerson finished with 10 as well.

Cumberland made 8-of-12 from behind the arc in the first period, including four from Brown and two apiece from Bond and Jamonte Graham. Brown’s four triples were part of a 16-4 run over a five-minute stretch after the Bears took an early 3-0 lead.

Delaryn Dodd’s steal and dunk put CU ahead, 25-11, midway through the half and the Phoenix maintained a 13-point advantage after Graham’s second trifecta of the period. Dunston scored six straight points for SSU to cut the lead to seven, but Hickerson answered with two field goals in the final two minutes and the home team led, 38-28, at intermission.

Carter’s 3-pointer and baskets by Dunston and Moffatt made it a four-point game just four minutes into the second half, but Hickerson and Johnson helped CU push the lead back to eight. The Bears hung in the contest because of Cumberland’s turnover woes in the final 20 minutes, staying within striking distance.

Two buckets from Frederick Moore and a short jumper by Nick Tingle pulled Shawnee State within 54-51 with 7:40 to play, but Johnson’s layup and one foul shot by Shelton made it a six-point game again. Bond was fouled with 4:38 remaining but was injured on the play and Ronell Abaekobe stepped in to hit two free throws for the eight-point lead before SSU made the big comeback for the win.