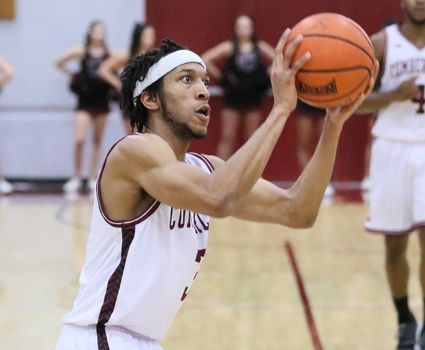 CAMPBELLSVILLE, Ky. – Cumberland erased a 19-point second-half deficit, tying the game with 8:09 to play, but Ron Scott’s 3-pointer ended an 11-minute drought without a field goal for Campbellsville University and the Tigers hung on for an 80-75 victory in men’s basketball action here Saturday at the Powell Athletic Center.

DeQuan Bond added a trifecta and Marquel Hickerson’s layup off the glass knotted the game at 63 with 8:09 remaining. Campbellsville did not hit a field goal during the CU run, connecting on four free throws. The Tigers missed 11 shots and committed four turnovers, but Scott’s high-arching triple from the top of the key ended the drought and Dii’jon Allen-Jordan added one free throw before Jamonte Graham’s layup on the fast break cut the deficit to two with 4:35 to play.

Allen-Jordan netted two straight field goals and Campbellsville (20-9, 7-8) made 7-of-8 at the foul line over the final 2:24 to ice the victory.

Harris paced the Tigers with 24 points, 16 of those in the first half, while Allen-Jordan recorded his 13th double-double of the season with 13 points and 10 rebounds. Hagen Tyler netted 11 points, all in the first half, and Rob Robinson added 11.

Campbellsville missed very little in the first half, hitting 9-of-17 from 3-point range and 20-for-36 overall.

Elliott Young hit one triple as part of a 10-0 run early by the Tigers for an 18-8 advantage and the second of Tyler’s three 3-pointers in the period stretched the lead to 12. Mark Brown answered with a three and Shelton posted two field goals to pull CU within 30-23, but Harris came back with another triple for the Tigers.

Shelton’s last field goal of the half made it 42-34, but Campbellsville finished the period with a 10-4 stretch. Tyler banked in a 3-pointer, Shawn Johnson added two baskets before a 3-point play from Harris put the home team ahead, 52-38, at the break.