#20 Univ. of Cumberlands at Cumberland Univ. | February 27, 2016
BoxscorePlay-by-Play1st Half2nd Half 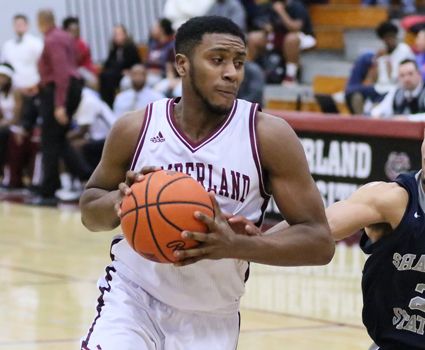 LEBANON, Tenn. – Marquel Hickerson posted 23 points and Jamonte Graham added 13, as Cumberland opened a double-digit lead in the first lead and never really let go in a 70-59 victory over 20th-ranked University of the Cumberlands in men’s basketball action here Saturday at the Dallas Floyd Recreation Center.

Cumberland (12-17, 5-11) ends the regular season 2-2 in its last four games with a pair of losses by a combined nine points. The Phoenix plays Thursday at 11 a.m. Central Time against St. Catharine College in the play-in game of the Mid-South Conference Championships. Check GoCumberlandAthletics.com for information on the tournament starting Sunday.

Graham hit a pair of 3-pointers and scored 10 points in the first half, helping Cumberland open a 12-point advantage in the first half. Hickerson netted nine points and Brown added eight for CU, who scored 19 of the first 26 points of the game.

The Patriots cut the lead to eight on five occasions in the opening 20 minutes, the last on Michael Dow’s long two-pointer just before the halftime buzzer, but the Cumberlands (20-10, 10-6) made only 11-of-30 from the field compared to 15-for-26 for the Phoenix.

Two baskets and two foul shots from Hickerson to start the second half increased the advantage to 46-32, CU’s biggest lead of the game, and Cumberland managed to lead in double figures until a 10-3 spurt by the Patriots midway through the period.

Xavier Owens hit a 3-pointer to start the run and D’Lando added four free throws before another triple by Owens made it 55-48 with 7:32 remaining. Brown answered with a trifecta for CU, but two foul shots by Owens and a jumper from Carter got the Cumberlands as close as they had been since less than four minutes into the game at 58-52.

Will Shelton’s layup and an old-fashioned 3-point play from Hickerson pushed the lead back to 11. Will Gary’s 3-pointer for the Patriots cut the CU lead to six again with 2:35 to play and a wild scramble with just over two minutes remaining helped Cumberland seal the win.

Graham turned the ball over near the top of the key, with Dow picking up the loose ball, but Dow lost it on the floor and Graham dove in to get it back. While sitting on the floor he turned the fed Hickerson for a layup and the foul, though he missed the free throw. Nevertheless Cumberland led 65-57 and had all but clinched the victory.

Owens led the Patriots with 16 points while Tre Boutilier scored 11 points and Carter netted 10. The Cumberlands shot just 32 percent for the game and made only 8-of-28 from behind the arc.

Hickerson netted four of Cumberland’s first nine points of the game, with CU jumping out to a 9-2 lead just over two minutes into the game, forcing a timeout by the Patriots. The first of two 3-pointers in the half by Graham increased the advantage to 12, though Temjae Singleton nailed his own trifecta for the Cumberlands to make it 19-11 for the home team.

Brown answered with a triple for the Phoenix, but Carter’s 3-pointer and baskets by Boutilier and Owens cut the CU lead to 26-19 midway through the period.

The lead went back-and-forth between eight and 12 for the rest of the half, with Dow hitting a long two-pointer just before the buzzer to make it, 38-30, for Cumberland at intermission.