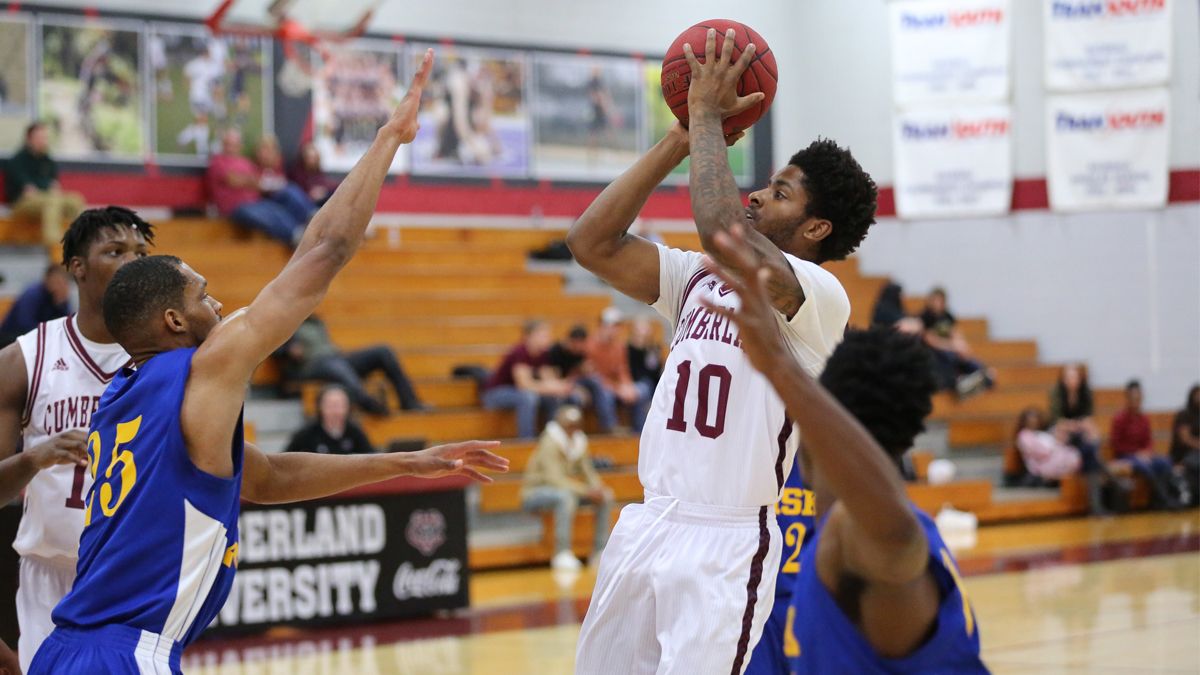 Cameron Johnson recorded 15 points in the opening half, and a total of 20 as Cumberland fell to Life University on Monday night at the Dallas Floyd Recreation Center. (Credit Steve Wampler)
Life University at Cumberland Univ. | November 28, 2016

LEBANON, Tenn. – Cameron Johnson scored 20 points for the Phoenix, netting 15 in the first half while Delaryn Dodd recorded 13 points and Joseph Wilbert grabbed 12 rebounds but a late 16-5 spurt for Life University sent them to a 73-67 Mid-South conference victory at the Dallas Floyd Recreation Center on Monday night.

The Running Eagles (4-4, 2-0 Mid-South) opened up the scoring with a two good free throws from Jameik Riviere, before Johnson tallied his first two points. A layup from Marquel Hickerson and two from Johnson knotted the score at six.

Johnson netted his first trifecta to help the Phoenix regain their lead, and two more from Hickerson and Johnson put CU up 15-11 at the 13:24 mark. A dunk from Life’s Dalarian Williams and a good free throw from Diondrey Holt, Jr., tied the score at 16.

Dodd’s dunk seemed to set the pace, as Cumberland would stay in the lead for the rest of the half. Four points from Wilbert extended the squads lead by eight, 30-22 with 6:01 remaining in the first period.

Johnson hit his second triple with an assist from Hickerson to give the Phoenix a 10 point advantage. Two points from Reid Pierce and a jumper by Jamonte Graham made the score, 38-27. Two free throws by Dodd sent CU into the half leading by nine, 40-31.

Riviere collected 14 points in the second stanza, while Life’s Zach Landis and Williams each recorded eight points, as Holt, Jr., posted six points and three other players netted five for the Phoenix.

Riviere posted five points in the second period before Johnson made a triple to lead 43-36. The Phoenix then scored only five points in a span of seven minutes, while the Running Eagles took advantage and tallied 16 to put them ahead by two.

A layup by Landis extended Life’s lead by four at the 5:52 mark to 60-56 as CU made a four point comeback with a jump shot by Johnson and a layup by Dodd.

A 3-pointer from Life’s Jonathan Beausejour sealed their lead, while Cumberland scored five points in the final three minutes but six points for the Running Eagles including two free throws and a layup by Chris Rhoney with 14 seconds remaining secured their 73-67 victory.

Cumberland travel’s to Kentucky on Thursday, December 1 to take on Campbellsville for another mid-south conference match-up at 7 p.m.