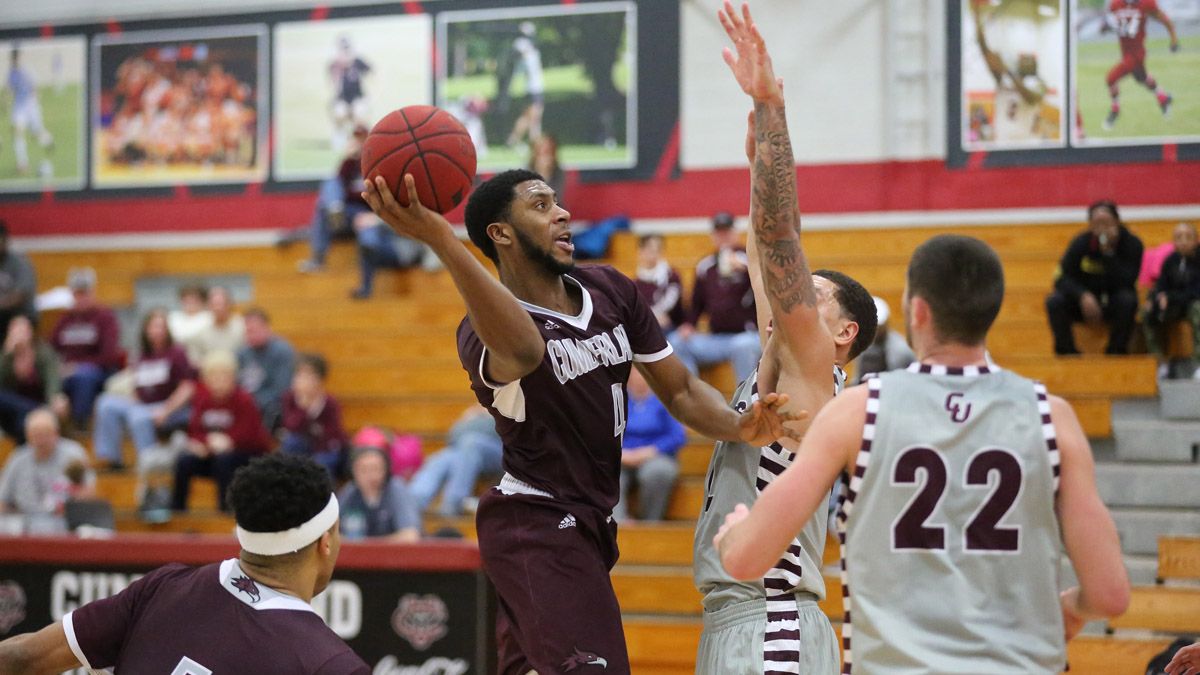 Marquel Hickerson netted 15 points, all in the second half, in Saturday's 69-56 victory at the Cumberlands. (Credit Steve Wampler)
Cumberland (Tenn.) at Cumberlands (Ky.) | 0,

WILLIAMSBURG, Ky. – Marquel Hickerson netted all 15 of his points in the second half and Diondrey Holt, Jr., posted 24 points with four 3-pointers in Cumberland’s 69-56 victory over ninth-ranked University of the Cumberlands here Saturday in men’s basketball action.

Hickerson and Holt., Jr., combined for 29 of the team’s 31 points during a 12-minute stretch of the second half, with Hickerson driving to the hoop for layups and Holt, Jr., doing a little of everything, knocking down a pair of 3-pointers as well as six free throws.

Cumberland (12-12, 5-7 ) led 29-19 at the break, but two field goals from Chance Morton made it 32-26 three minutes into the second half. Holt, Jr., and Dodd netted baskets to increase the advantage back to 10, but four free throws from Kelsley Wilkinson made it a six-point game again with 14:55 remaining.

A field goal by Eddie Tornes made it a four-point game with 13:20 to play, but the Phoenix scored seven of the next eight points. Hickerson made a runner off the glass and Holt, Jr., was fouled on a 3-pointer, hitting all three shots.

Holt, Jr., then drilled a 3-pointer from the wing on the fastbreak on an assist from Hickerson, increasing the lead to 49-36. The Patriots never got closer than eight the rest of the way and an old-fashioned 3-point play by Hickerson helped push the advantage back to 15.

Jamonte Graham was the only other Cumberland player in double figures with 12 points, 10 of those in the first half.

Morton led the Patriots with 17 p0oints and eight rebounds and Wilkinson added a dozen points. Marquis Yates netted 10 as well for UC.

Cumberland started the game quickly with consecutive 3-pointers from Graham and baskets by Holt, Jr., and Delaryn Dodd for a 10-4 advantage. Holt, Jr., added another triple for a 13-6 advantage, warranting a timeout from the Patriots.

Telvin Wilkerson’s fadeaway 15-footer stretched the lead to 15-6 and a bucket from DeQuan Bond gave Cumberland a 19-8 advantage with 12:36 left in the opening half. The Phoenix did not score for the next four minutes, during which time the Cumberlands netted seven straight points, including an old-fashioned 3-point play from Wilkinson.

Will Shelton’s 15-footer finally ended the scoring drought for CU and two free throws by Rhyan Townes stretched the lead back to eight. Marquis Yates and Eric Duncan netted field goals for the Patriots, cutting the lead to four, but Cumberland scored the final six points of the period.

Holt, Jr., hit a driving layup and Graham added two more buckets for a 29-19 lead, though the teams combined for just six points in the final six minutes of the half. Graham led the Phoenix with 10 points and Holt, Jr., recorded seven, though CU committed eight turnovers.

The Patriots shot just 29 percent from the field, including 0-for-13 from behind the arc and 3-of-8 at the foul line.