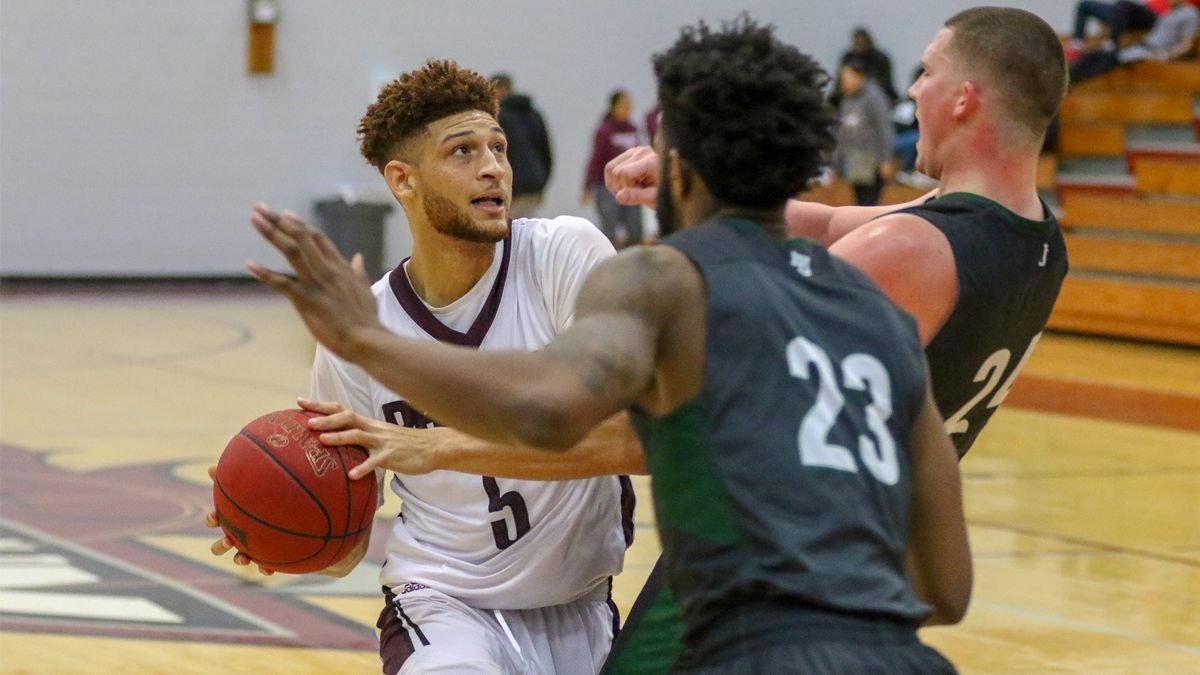 LEBANON, Tenn. – Five players scored in double figures and Cumberland put together a 20-0 run in the second half to blow open the contest, ending a five-game losing streak with a 100-65 victory over fifth-ranked Lindsey Wilson in men’s basketball action here Thursday night at the Dallas Floyd Recreation Center.

Cumberland (9-13, 2-6 Mid-South) avenged a two-point loss to the Blue Raiders on January 6 that ended with LWC hitting three free throws with 1.8 seconds remaining. It marked just the second win in the series for the Phoenix in the last 16 years and improved CU to 7-22 all-time against Lindsey Wilson (20-2, 5-3). It also marked the first 100-point outing for CU since November 7, 2013, versus Mid-Continent University.

Cumberland ended the first half with a 19-9 run to take a 47-31 lead at the break. Juandrico Walker and Diondrey Holt, Jr., each hit 3-pointers and Rodney Culver provided five points off the bench. Cumberland made 7-of-8 at the foul line during the stretch and Walker and Andrew Rogan each provided field goals.

Holt, Jr., made a layup and a triple to start the second half for CU and the Phoenix led 54-36 even after an old-fashioned 3-point play from Charles Sutton and a layup by Bryan Wallace. Cumberland kept the lead in that range and was ahead, 62-44, with 12:29 remaining after a layup from LWC’s Jordan Hamlette.

The Blue Raiders did not make a field goal for the next seven minutes, missing six shots and going only 5-for-10 at the foul line during the stretch.

Tranard Chester started the run with a 3-pointer and scored seven of his 11 points during the spurt. Charles Sweatt-Washington added a triple before baskets by Blake Johnson and Chester. Sweatt-Washington hit another 3-pointer, the second of three in the contest for the senior, increasing the lead to 75-44.

Chester’s layup and Trenton Perry’s triple made it 82-44 and the rout was on. The crowd erupted on two dunks by Ty Sean Powell and Chad Foster hit a jumper with just under a minute to play to reach the century mark.

Holt, Jr. scored 18 points for the Phoenix and Powell added 14 points and nine rebounds. Rhyan Townes finished with a dozen points, Andrew Rogan netted 10 and Chester posted 11. Sweatt-Washington recorded nine and Walker and Culver each finished with seven for CU, which hit 9-of-15 from 3-point range and committed a season-low nine turnovers.

Wallace netted a game-high 19 points and added eight boards for Lindsey Wilson. Sutton posted 15 points and Hamlette and Kel Stotts each scored 10. LWC made only 6-for-23 from 3-point range and Cumberland turned 14 turnovers into 25 points.

The teams went back-and-forth in the first eight-plus minutes of the contest, though Cumberland started the game with a dunk from Walker and a layup by Townes. Baskets by Wallace and Sutton and a 3-pointer from Stotts gave the Blue Raiders a 9-6 advantage.

Cumberland put together an 11-2 run over the next five minutes that started with field goals from Townes and Chester. Townes added two free throws before a 3-pointer from Sweatt-Washington and then two foul shots from Chester for a 26-17 CU lead.

Wallace’s jumper and a triple by Hannes Erhardt cut the advantage to six with just over five minutes left in the period, but Cumberland outscored the Blue Raiders, 19-9, heading to intermission.

Wallace led all scorers with 11 points on 5-of-12 shooting in the first half but the rest of the Blue Raiders connected on just 6-of-17 shots. Townes posted eight points for Cumberland while Walker and Holt, Jr., each netted seven and Powell added six. The Phoenix committed just two turnovers in the half, a season-low.

Cumberland hosts Shawnee State next Thursday at 8 p.m. in the third of four straight games at home.