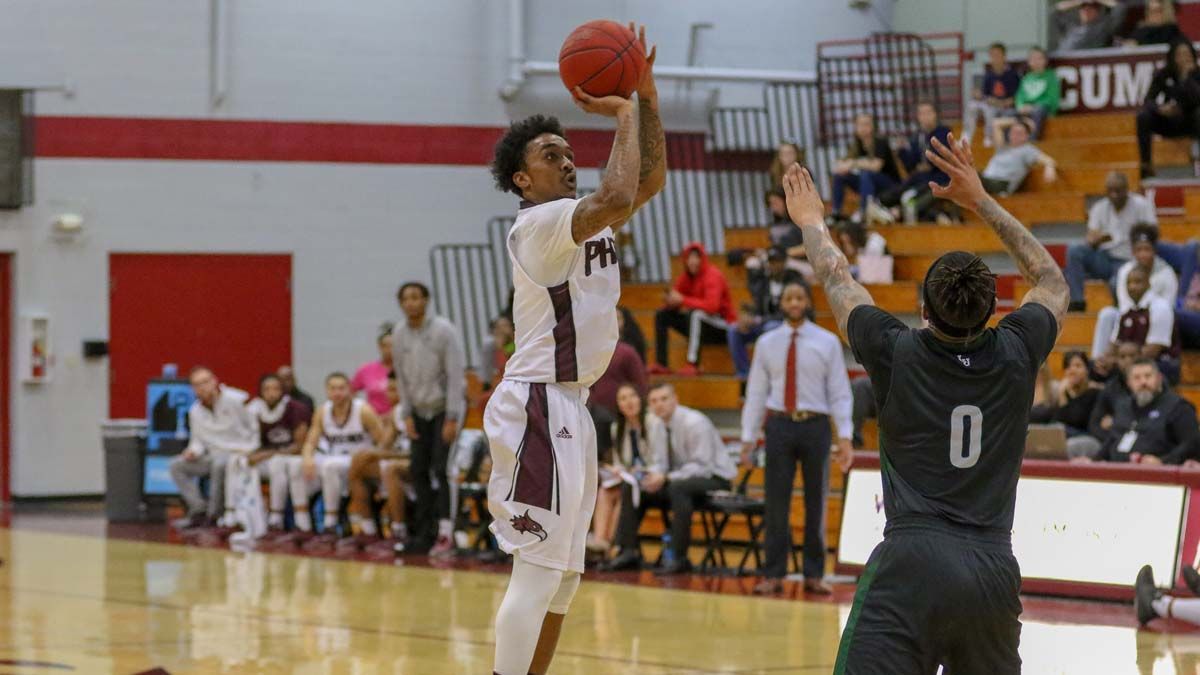 MARIETTA, Ga. – Diondrey Holt, Jr., and Ty Sean Powell each netted 28 points and Juandrico Walker posted 17, with the trio combining to make 28-of-34 shots while grabbing 23 rebounds, as Cumberland made enough plays down the stretch to hold off 21st-ranked Life University, 93-85, in men’s basketball action here Thursday night at The Eagles’ Nest.

The Phoenix (11-14, 4-7 Mid-South) avenged a one-point loss to the Running Eagles last month in Lebanon, a contest in which Life put together a 13-1 over the final three minutes, including a tip-in from David Scott to escape with a 69-68 victory.

Cumberland led by nine points at the half and increased the advantage to as many as 16 points early in the second half. The Phoenix led 71-56 midway through the second period, but the Running Eagles scored 16 of the next 23 points, getting within six with 5:50 remaining.

Undra Mitchem netted 14 of his 23 points during the run for the Running Eagles, including a pair of 3-pointers, the last one cutting the Cumberland lead to 78-72. Walker answered for the Phoenix with a pair of baskets and Powell added two foul shots, increasing the lead back to 10 with just under four minutes to play.

Jay Johnson posted the next four points for Life, converting an old-fashioned 3-point play, making it a six-point game again with two minutes to play. Walker then fed Powell for a dunk with 1:16 remaining, finding a hole in the zone defense for the Running Eagles.

Powell made two foul shots with 49.9 seconds to play and after a miss by Life, Walker ran out for a dunk, all but sealing the victory. Holt, Jr., and Andrew Rogan each made two free throws in the last 19 seconds and Cumberland improved to 4-7 in league play.

Powell connected on 10-of-11 shots from the field and 8-for-10 at the foul line, grabbing eight rebounds in 28 minutes of action. Holt, Jr., made 10-of-14 shots overall, including 6-for-9 from 3-point range. He added eight points and five assists. Walker hit 8-of-9 shots from the field and registered seven boards while Rhyan Townes finished with six points and nine rebounds for CU.

Andrew Rogan hit a 3-pointer and converted an old-fashioned 3-point play in the first five minutes of the contest, giving Cumberland an early 11-5 advantage, as the Running Eagles started the game 2-for-10 with four turnovers. Miller’s 3-pointer ended the stretch for Life, but Tranard Chester answered with a triple on the other end for CU.

The Phoenix scored just three points over the next four minutes and the home team took advantage, putting together a 12-3 spurt. Landis and Mitchem each hit 3-pointers for the Running Eagles and Landis and Johnson added field goals, giving Life a 20-17 advantage.

Holt, Jr., nailed a 3-pointer to even the contest at 20 and added two more triples in less than two minutes, but Mitchem and Miller answered with three’s for the Running Eagles and another by Landis made it 29-28 Life.

Landis connected on another 3-pointer and David Scott made a basket underneath, but Cumberland ended the half with a 15-4 spurt. Powell netted two straight field goals and Walker got a bucket for CU.

Walker added another basket before Townes got his own rebound and Powell scored again. Chester drilled a 3-pointer as the shot clock was winding down in the last minute of the half, giving the Phoenix a 47-38 advantage at intermission.

Powell connected on 6-of-7 shots for 13 points and Holt, Jr., netted four triples for 14 points, as Cumberland shot 53 percent from the floor in the half.

Landis collected 11 points while Jay Johnson and Miller each netted eight for the Running Eagles, who were 8-of-17 from behind the arc in the first period.

Cumberland plays at 24th-ranked University of the Cumberlands on Saturday at 3 p.m. CT, the second of three straight games on the road for the Phoenix.