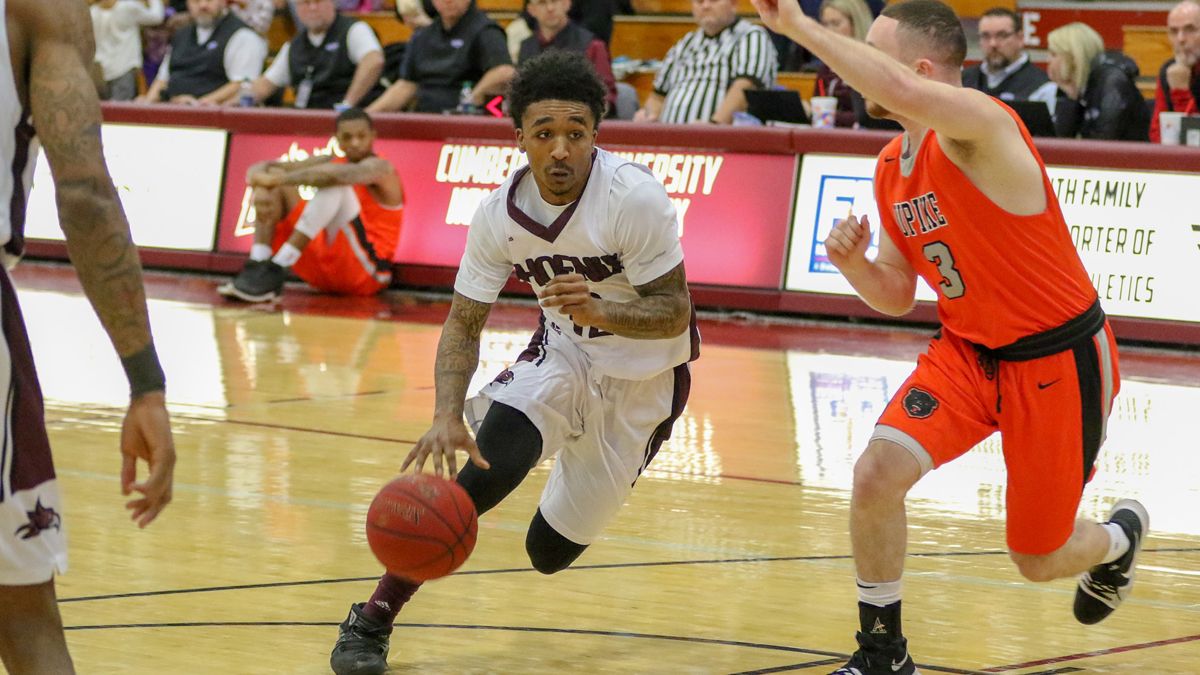 CAMPBELLSVILLE, Ky. – Campbellsville University used a 26-10 run in the first half to break open a close game and the Tigers netted 10 3-pointers, blowing past Cumberland for a 97-71 victory in men’s basketball action here Thursday night at the Powell Athletic Center.

Cumberland led 14-11 six minutes into the contest, but the Phoenix posted just four field goals over the next 10 minutes. Hagen Tyler and Jalen Coates each hit a pair of 3-pointers for the Tigers during the 26-10 run in the first half, with Tyler scoring 10 total points during the stretch.

Cumberland was 4-for-9 from the field with four turnovers during the run. The two triples from Coates ended the spurt with Campbellsville ahead, 37-24, with five minutes left in the half.

Andrew Smith added a pair of field goals and Shawn Johnson nailed the last of six 3-pointers at the one-minute mark before intermission, giving the Tigers a 53-37 advantage at the half.

Coates netted 14 of his game-high 21 points in the second half, as Campbellsville kept driving to the basket for layups against the Cumberland defense. Smith finished with 20 points and 15 rebounds and Tyler added 19 points. The five starters for Campbellsville posted 80 of the team’s 97 points.

Diondrey Holt, Jr., collected 15 points and Ty Sean Powell recorded 14, with the duo making 12-of-22 shots overall. Cumberland was outrebounded, 40-27, including 14 offensive rebounds for the Tigers that turned into 17 second-chance points.

The contest saw three ties and six lead changes in the first six minutes, with the teams going back-and-forth. Juandrico Walker netted six of Cumberland’s first 12 points, four of those on putbacks, and a basket by Holt, Jr., gave CU a 14-11 edge at the 14:13 mark, but the Phoenix did not score for the next three minutes.

The Tigers put together a 16-3 spurt over the next six minutes, with Tyler hitting a pair of 3-pointers and Johnson adding another to start the run. Tyler hit a baseline jumper and Smith posted a field goal underneath as well as 1-of-2 foul shots for a 27-17 Campbellsville lead with 8:33 left in the half.

Powell scored three straight baskets for the Phoenix but Cumberland was unable to stop the Tigers, with Coates hitting a pair of triples, extending the Tigers advantage to 37-24. An old-fashioned 3-point play by Deion Evans increased the lead to 44-27 and a final 3-pointer from Johnson made it a 20-point game at the one-minute mark of the half.

Baskets by Trenton Perry and Holt, Jr., cut the halftime deficit to 53-37.

Tyler and Smith each netted 14 points for the Tigers, who shot 54 percent from the field, including 6-for-10 from 3-point range. Powell led the Phoenix with 12 points and Holt, Jr., added 10, but the Phoenix committed six turnovers, off-setting 59 percent (16-of-27) shooting for CU.

Jacob King made three straight 3-pointers in the second half for the Tigers before Coates took over, scoring 12 of his 14 points in the period in the final 10 minutes.

Cumberland ends the regular season at home Saturday, taking on Georgetown College at 4 p.m. at the Dallas Floyd Recreation Center.