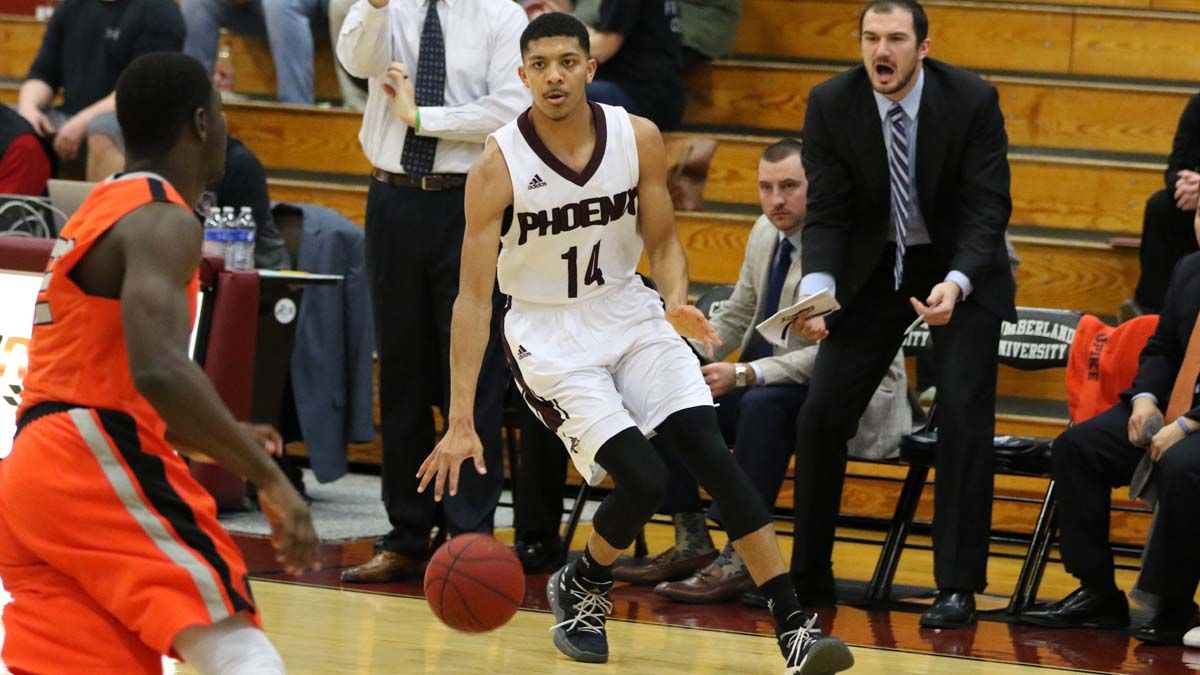 Andrew Rogan scored 12 of his 20 points in the second half in CU's 93-78 win Friday against Tennessee Wesleyan. (Credit Steve Wampler)
Tennessee Wesleyan at Cumberland Univ. | October 26, 2018

Tennessee Wesleyan (1-1) led the entire first half and for the first six minutes of the second period before a 12-2 spurt by the Phoenix (1-0) changed the complexion of the contest. Andrew Rogan started the run with four of his 12 second-half points and the CU defense forced three turnovers by the Bulldogs.

Wesleyan pulled within 67-63 before a 16-7 stretch by the Phoenix put the game away. Rogan and Shamari Denson each scored five points and hit 3-pointers during the run, giving CU an 83-71 advantage.

Jason Williams netted 14 of his 18 points with a pair of triples in the second half as well, as Cumberland shot 65 percent from the field in the final 20 minutes. Denson finished with 10 points off the bench.

Wesleyan pulled down 18 offensive rebounds, converting those into 23 second-chance points. Ty Patterson and QD Cox each posted 19 points for the Bulldogs and John Payne and Darius Flier scored 11 apiece, though TWU shot just 6-of-19 from 3-point range, including 2-for-10 in the second half.

Cumberland got off to a rocky start in the first six minutes, committing five turnovers, which the Bulldogs converted into points on the other end. A pair of baskets by Patterson and field goals by Cox, Jalen Oliver and Payne were part of a 10-4 spurt for Wesleyan, giving TWU a 13-6 lead and forcing a timeout by the Phoenix.

CU put together a 12-5 run over the next four-plus minutes starting with a basket by Williams and an old-fashioned 3-point play from Powell. Denson drilled a 3-pointer from the wing and Deiontay Walters and Isaac Stephens added baskets, evening the contest at 18 midway through the period.

The Bulldogs netted seven straight for a 28-22 advantage with a 3-pointer by Cox highlighting the spurt. Javel Gillespe’s triple put TWU in front, 33-26, with just under four minutes left in the half before baskets by Rogan and Walters cut the CU deficit to four.

Rogan made a 3-pointer from the corner and was fouled but missed the free throw and then drilled another from the opposite corner. A layup by Williams with 1.5 seconds left before the break made it 40-38 Wesleyan at intermission.