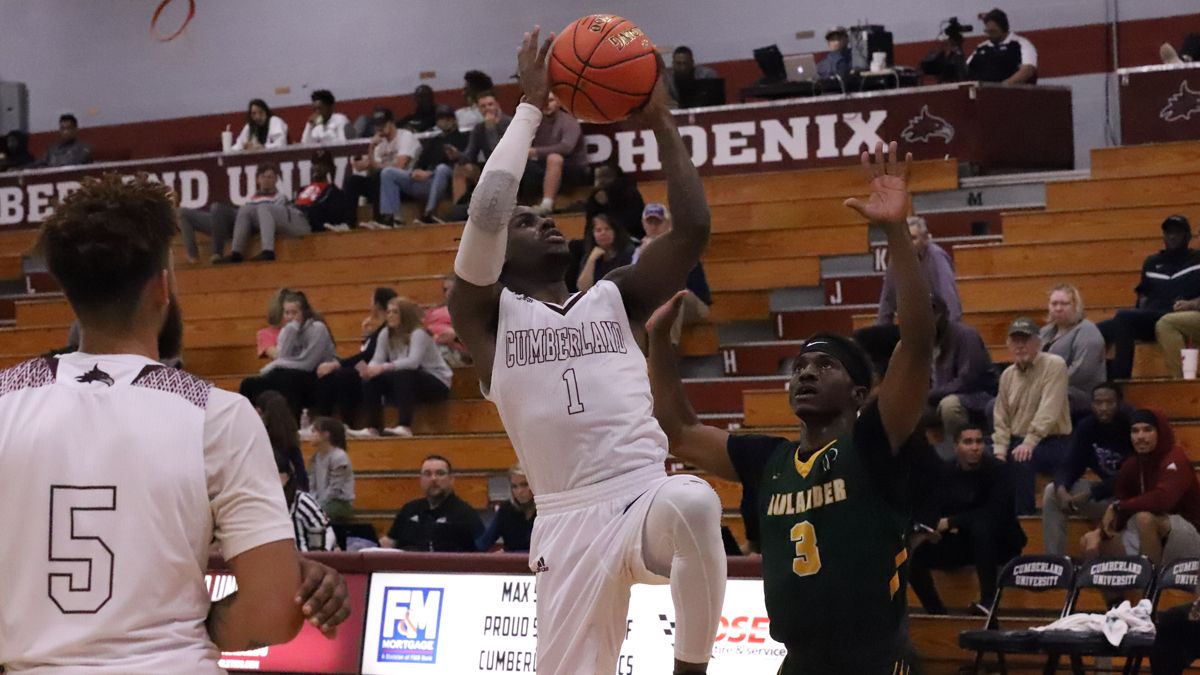 LEBANON, Tenn. – Ty Sean Powell posted 16 points and 15 rebounds and Shamari Denson added 17 points, as Cumberland ended the half on an 18-5 run to take control of the game and post a 75-65 victory over Philander Smith in men’s basketball action here Monday night at Dallas Floyd Phoenix Arena.

The Phoenix (4-0) shot 55 percent from the field but committed 26 turnovers, which the Panthers turned into 24 points. Cumberland was more efficient from 3-point range than in Saturday’s win over Martin Methodist, connecting on 8-of-15 as a team, including 3-for-3 from Denson.

The senior guard hit all four field goals and made all six foul shots, adding three assists and two rebounds in his first start of the season. Three-pointers from Denson and Tranard Chester pushed the CU lead to 69-51 with 4:17 remaining.

Powell helped the Phoenix clean the defensive glass with 14 defensive rebounds and made 6-of-10 shots from the field before foul trouble in the second half limited his minutes. Deiontay Walters scored seven of his 12 points off the bench in the first hald and Isaac Stephens netted nine of his 11 points in the first 20 minutes for CU.

Stephens posted a pair of layups for the Phoenix in the first three minutes and two foul shots by Powell evened the game at seven. The Panthers netted the next seven points, though, as the home team did not score for more than four minutes.

Austin and Demarco Brown recorded layups and a 3-pointer by Cothron made it 14-7 PSC at the 10:58 mark of the first half. Powell’s layup in traffic ended the scoring drought for CU and a 3-pointer by Denson and another layup Stephens knotted the contest at 16.

Austin’s layup put the Panthers back in front, but Cumberland ended the half with an 18-5 spurt over the final seven minutes, starting with a jumper and a triple by Walters. Powell’s dunk on an alley-oop was followed by an Andrew Rogan 3-pointer from the left corner.

Walters added another layup and Denson made two foul shots before a final run-out dunk by Powell just before the halftime buzzer put the Phoenix on top, 35-24, at intermission. Walters netted seven points off the bench and Powell and Stephens each collected nine while Powell grabbed 10 rebounds.

Philander Smith hit just 1-of-10 from the field with four turnovers during the Cumberland run. Austin led the Panthers with 10 points but no other player scored more than three.

Rogan’s 3-pointer from the right corner and a layup by Kareem Wright gave CU a 42-28 advantage just under three minutes into the second half. The Panthers continued to hang around, though, with a layup and one free throw by Austin and a jumper from Jaylon Bardley pulling PSC within 43-25.

Neither team scored for more than four minutes midway through the period, with Chester’s 3-pointer ending the drought at the 8:49 mark, but Cothron answered with his own triple. Cothron hit another trifecta, making it 50-43 CU, and the teams traded free throws for the next two minutes before a 3-pointer by Denson.

Stephens got a tip-in and Denson drilled his second triple, pushing the lead to 64-49. Chester’s trifecta just over a minute later and one free throw by Walters gave Cumberland its biggest lead of the night at 70-51.

The Phoenix scored just one point over the next two-plus minutes and the Panthers netted 11 of the next 12 points, including two baskets from Daldric Sergent and a 3-pointer from Kevin Shields, but PSC ran out of time. A layup by Denson ended the field goal drought for CU and Powell added an exclamation point with a dunk in the final five seconds.

Cumberland plays an exhibition game Tuesday night at UT Martin at 7:30 p.m. before hosting Oakwood University on Thursday at 8 p.m.