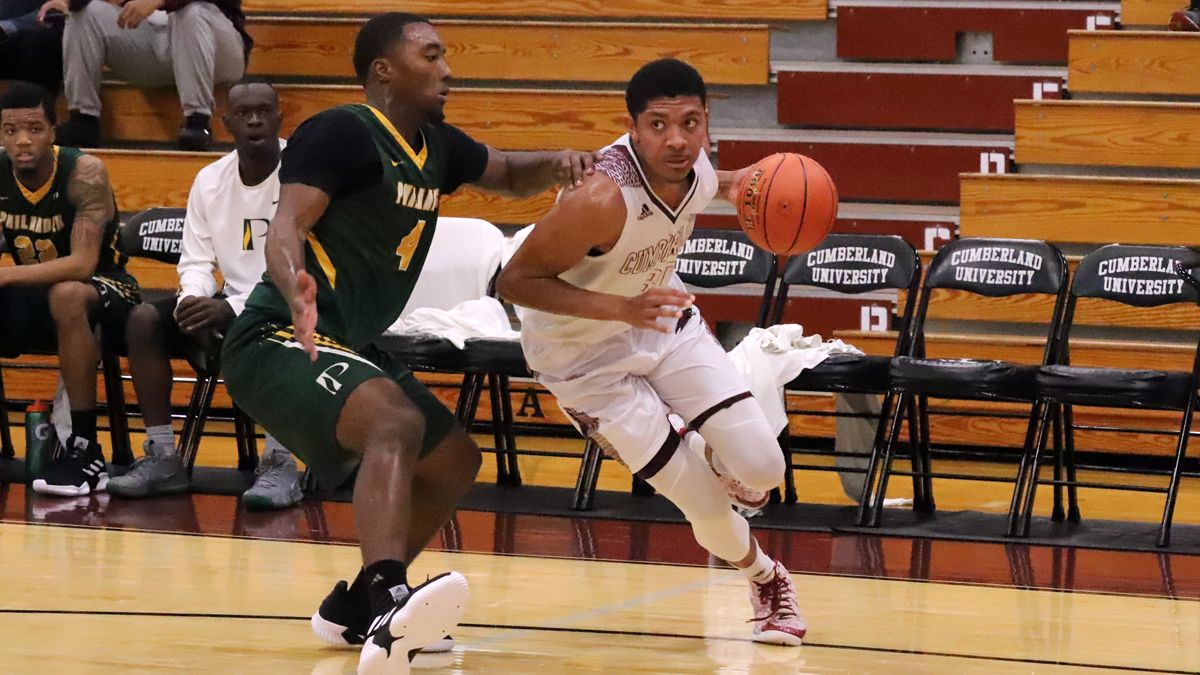 LEBANON, Tenn. – Andrew Rogan made five 3-pointers and finished with 27 points while Ty Sean Powell posted 14 points and 10 rebounds, but Philander Smith’s Jaylon Bardley nailed a 3-pointer with less than a second remaining, giving the Panthers an 86-85 victory over Cumberland in men’s basketball action Friday night in Little Rock, Ark.

The Phoenix (6-4) trailed by eight with 4:24 remaining after a 3-pointer by PSC’s Kevin Shields, but Cumberland netted 10 straight points, starting with a triple by Rogan at the 2:29 mark. Isaac Stephens recorded an old-fashioned 3-point play with just over a minute remaining and another triple by Rogan with less than 10 seconds remaining put the Phoenix ahead by one.

Philander Smith was called for a technical foul after the basket and Rogan netted 1-of-2 foul shots, making it 85-83 CU, but the Panthers kept possession, setting up the final shot from Bardley for the win.

The contest featured 48 fouls and 70 free throws, each team with 35. Cumberland committed 22 turnovers in the loss, which the Panthers converted into 20 points.

Rogan led all players with 27 points, hitting 9-of-14 shots overall and 5-for-8 from behind the arc. He was also 4-for-6 at the foul line, as Cumberland connected on 26-of-35 attempts at the charity stripe.

Stephens posted a season-best 19 points on 8-of-10 shooting, grabbing eight boards as well, and Tranard Chester collected 12 points and seven caroms in his first start of the year for CU.

Bardley paced Philander Smith with 19 points along with eight rebounds off the bench while Dejalin Austin recorded 17 points and 11 boards for the home team. Na’Quan Cothron added 14 points and Shields finished with 13 for PSC.

Cumberland jumped out to a 7-2 edge early thanks to a 3-pointer from Rogan and a layup and tip-in by Stephens. Bardley’s first 3-pointer of the game pulled the Panthers within 9-8, but CU answered with a dunk from Powell and two layups by Rogan for a 15-8 advantage.

Cothron’s 3-pointer and jumper for Philander Smith within a pair, but each time the Phoenix came right back, including a layup and two free throws from Rogan along with an old-fashioned 3-point play from Chester. Stephens’ layup at the 9:42 mark pushed the CU lead to 27-18.

Deiontay Walters connected on four straight free throws for a 36-24 advantage with 6:59 left in the half, but the Panthers posted a 19-2 run over the next four minutes. Cumberland committed nine turnovers and took just one shot while making 2-of-4 at the foul line during the stretch.

Miquan Martin hit a 3-pointer and then a layup to start the run and Austin collected two free throws and a basket before his triple knotted the game at 38. Austin added a field goal before two foul shots by Bardley and a jumper from Daldric Sergent gave PSC a 43-38 lead with 2:49 left in the period.

Rogan’s triple to start the second half got CU within seven, which the Phoenix did three times in the first five minutes of the period. Chester’s jumper and two foul shots by Walters made it a three-point game with 13:46 remaining.

Cothron’s jumper and two free throws pushed the Panthers lead back to nine, but the Phoenix stayed within striking distance thanks to three straight baskets by Stephens, the last one cutting the deficit to four midway through the half.

The lead stayed between 4-7 for Philander Smith until two foul shots by Bardley and one from Cothron at the 7:03 mark pushed the advantage to nine. Brandon Levier’s two free throws and a jumper from Walters got CU within five, but the 3-pointer by Shields at the 4:24 mark made it an eight-point game again, setting up the final-minute drama.

Cumberland does not return to the court until January 5, beginning Mid-South Conference play against Lindsey Wilson at 4 p.m. at Dallas Floyd Phoenix Arena.