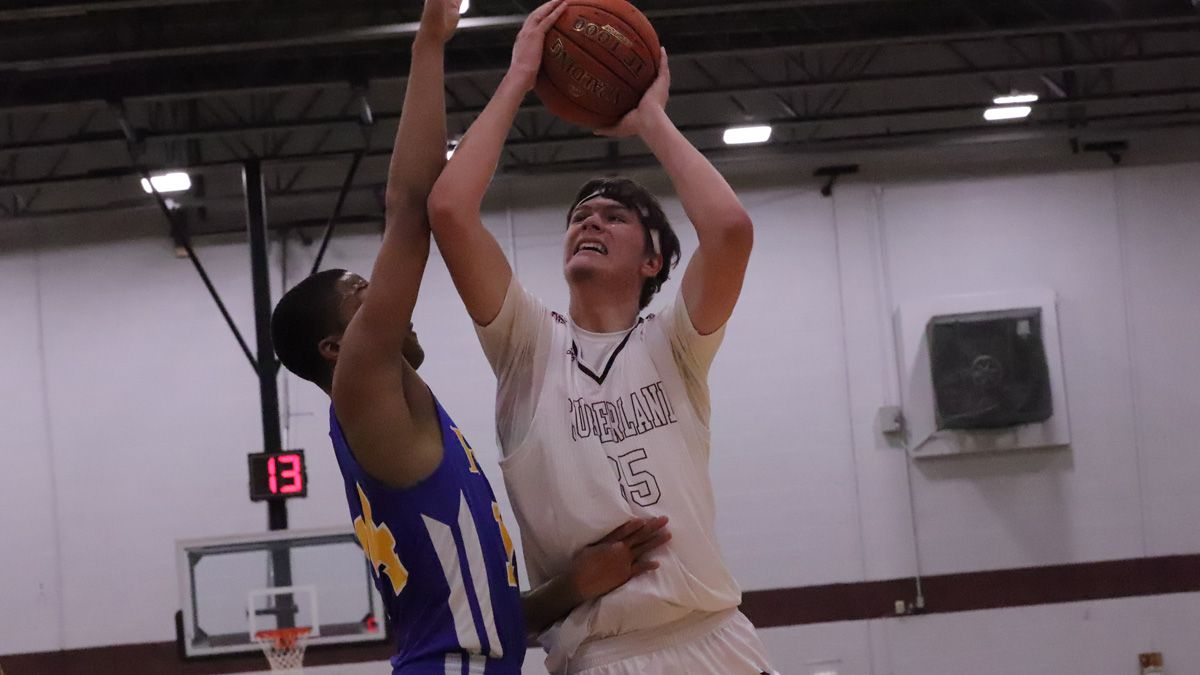 LEBANON, Tenn. – Andrew Rogan tied his career-high with 27 points, Asher Blum netted 17 off the bench and Cumberland started the second half with a 12-3 run, pulling away from Fisk down the stretch in an 87-64 victory in men’s basketball action here Monday night at Dallas Floyd Phoenix Arena.

The Phoenix (8-4) improved to 6-0 this season at home and played its final nonconference game of the year against the Bulldogs (3-11).

Rogan made 6-of-7 3-pointers in the first half and finished 7-of-8 from behind the arc, adding four rebounds, five assists and two steals. Blum collected 13 of his 17 points in the second half, playing 15 minutes in the period and hitting 6-for-10 field goals and all five foul shots to go with five rebounds for the freshman.

The first half was back-and-forth and Fisk kept things tight thanks to 9-of-14 shooting from 3-point range, including three from Montreal Nabors and two apiece by Marcus Summerville and Addison Miller. Cumberland put together a 13-0 run midway through the period to take the lead for good and Rogan’s hot shooting held CU stretch to lead to as many as nine before taking a 46-38 advantage to the locker room.

Miller’s jumper started the second half for the Bulldogs, but the Phoenix netted 12 of the next 13 points, including a four-point play by Deiontay Walters, giving the home team a 58-41 lead.

Anthony Hassell’s triple for Fisk made it 64-51, but that was as close as the visitors would get. Cumberland posted a 9-2 spurt over the next three minutes, stretching the lead to 20 behind six points from Blum.

Miller led the Bulldogs with 21 points, hitting 4-of-7 from behind the arc, while Nabors netted all 11 of his points in the first half. Fisk made just 3-of-17 from 3-point range in the second period after the hot start from long range.

Cumberland got off to a quick start, netting the first seven points of the game thanks to a 3-pointer from Rogan and baskets by Powell and Isaac Stephens, but Fisk responded with an 11-4 spurt over the next four minutes, beginning triples by Summerville and Miller.

Miller connected on another trifecta and after one foul shot from Hassell, David Patton nailed a 3-pointer for a 13-11 Bulldog advantage. The Phoenix committed four of its 10 first-half turnovers during the stretch.

Rogan answered with a triple for Cumberland, one of six from behind the arc in the half for the CU senior, but a basket by Miller and a 3-pointer from Nabors put Fisk ahead, 19-14.

The Phoenix registered the next 13 points over a three-minute span, including two free throws and a short jumper by Blum and another three from Rogan. Chester’s two foul shots ended the spurt, giving the home team a 27-19 advantage.

Fisk pulled within two points on two different occasions before the break thanks to a pair of 3-pointers from Nabors and one by Summerville, but Rogan answered with his own trifecta and Powell got a layup and then a steal and dunk to keep the Bulldogs at bay.

Consecutive baskets from Chester and Stephens stretched the lead to eight and back-to-back 3-pointers by Rogan made it a nine-point edge. Victor Alston made three free throws for Fisk in the final minute, but Chester’s baseline field goal in the last 10 seconds put Cumberland in front, 46-38, at intermission.

Rogan was 6-for-7 from 3-point range for 18 points in the period while Powell scored nine points and Chester added eight. Nabors led the Bulldogs with 11 points, including three 3-pointers, and Summerville and Miller each posted eight. Fisk connected on 9-of-14 from behind the arc in the first 20 minutes.

Cumberland plays at seventh-ranked Campbellsville University this Thursday at 5 p.m. CT, the first of three straight conference road games versus ranked opponents for the Phoenix.