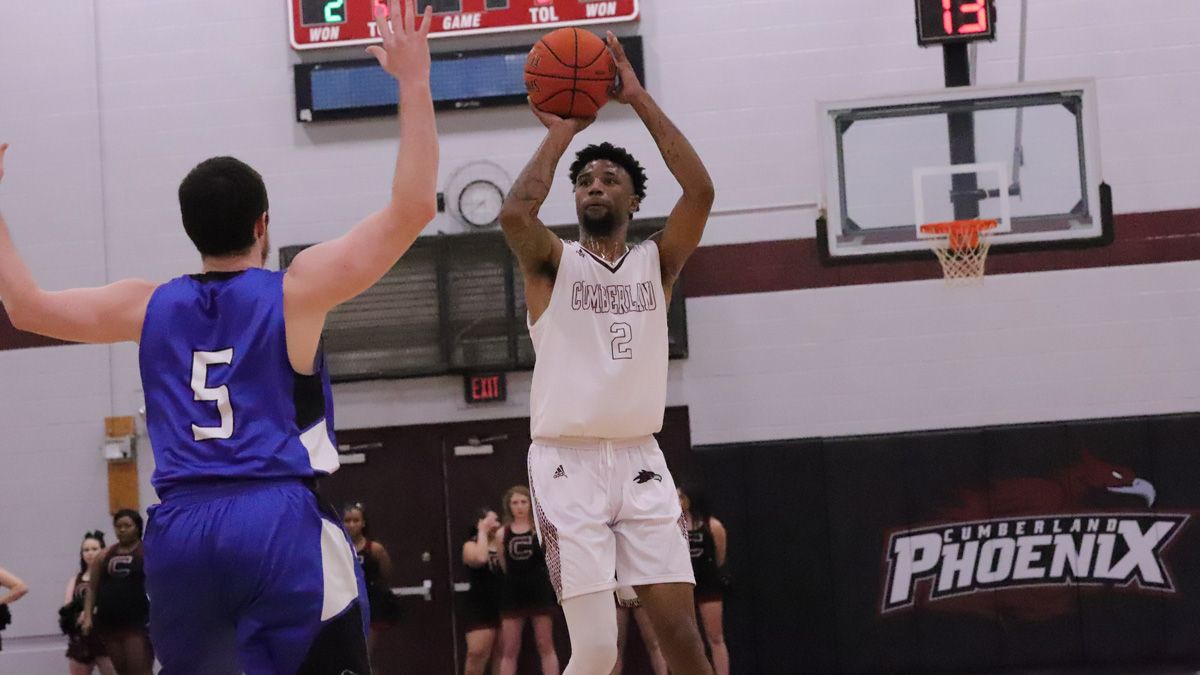 PIKEVILLE, Ky. – Fifteenth-ranked University of Pikeville scored 13 straight points midway through the second half, breaking open a three-point game and holding off a late charge from Cumberland for a 77-70 win over the Phoenix in men’s basketball action here Thursday night at the East Kentucky Expo Center.

The Phoenix (8-7, 1-3 Mid-South) trailed by as many as 12 points in the first period but just seven at halftime. The Bears (16-3, 3-1) pushed the advantage back to 11 early in the second half, but Cumberland cut the deficit to three with eight consecutive points, including a basket by Shamari Denson and 3-pointers from Tranard Chester and Asher Blum.

Pikeville answered with a 13-0 run over the next four minutes, as the Phoenix missed three shots and committed a pair of turnovers. Luke Layhew netted six of the 13 points and Xavier Gaona ended the spurt with a layup, extending the Bears’ advantage to 65-49 with 6:31 to play.

Cumberland continued to play through the final horn, getting within 10 with a 3-pointer from Blum and a basket by Chester, but Isaac Stephens lost control on the way up on a layup with just under four minutes to play.

Chester’s third 3-pointer of the half made it a seven-point game in the final minute, but that was as close as the Phoenix would get. Chester netted 21 of his career-high 25 points in the second half while posted 10 points. Denson collected 11 points, nine in the first period.

Pikeville scored the first seven points of the game, as Cumberland committed two of its 14 first-half turnovers and missed its first four shots before Blum’s 18-footer got the Phoenix on the board at the 16:55 mark of the first half.

The Bears hit 3-of-4 free throws at 15:06 of the period after Andrew Rogan was called for his second foul and then drew a technical foul. The foul shots put the home team ahead, 14-4.

Denson’s long jumper and then a 3-pointer from the senior closed the deficit to five, but Gaona answered with one of his three triples in the half for the Bears, who pushed the lead back to 10 with another 3-pointer by Gaona and two free throws from Delacruz.

Baskets by Chester and Deiontay Walters got CU within seven, but Carlton made a layup and then got his own miss for a bucket to push the advantage back to 11 for Pikeville. Gaona’s final three of the period gave the Bears their biggest lead at 34-22.

Isaac Stephens and Ty Sean Powell each scored and Denson got a layup in the final minute before Gaona made 1-of-2 free throws with 12.5 seconds remaining, putting Pikeville ahead, 35-28, at intermission.

Cumberland shot only 39 percent from the field and committed the 14 turnovers, though many were dead-ball miscues, which did not lead to points for the Bears. Denton netted nine points off the bench for CU while Gaona posted 14 points on 5-of-8 shooting for the home team.

The Phoenix return home next Thursday at 8 p.m., taking on Life University.