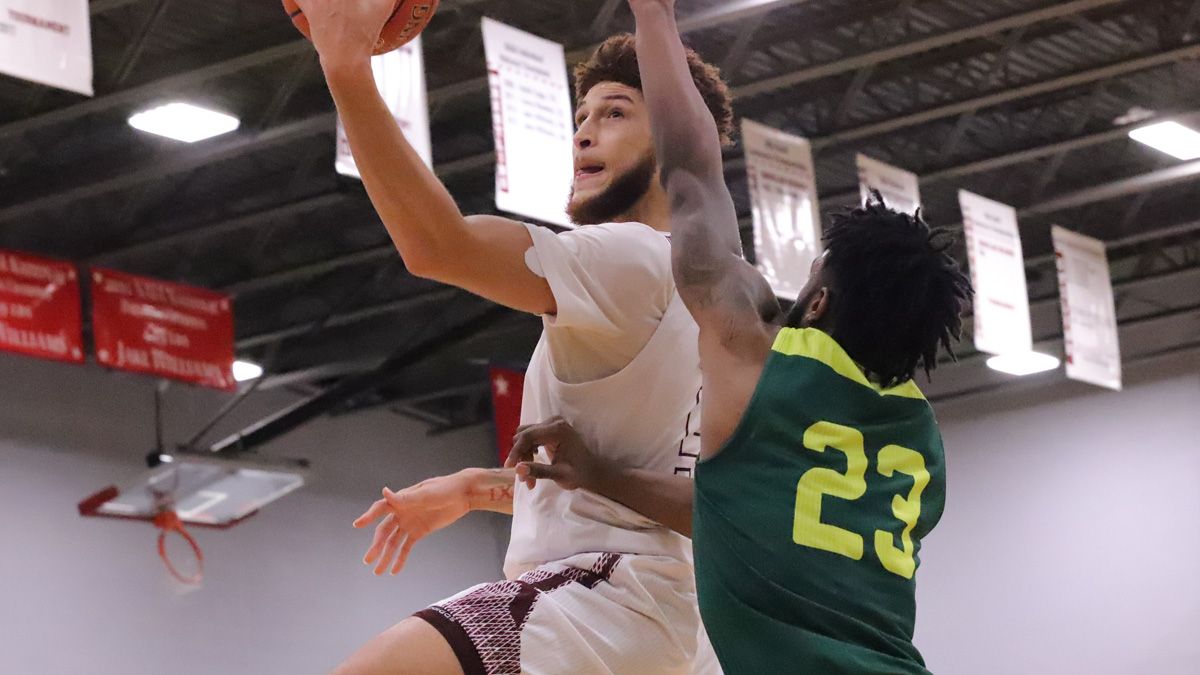 Cumberland (9-7, 2-4 Mid-South) held off a furious comeback by the Running Eagles, who made three 3-pointers in the final 75 seconds and connected on seven of their final 11 shots of the game after hitting just 7-for-23 in the first 14 minutes.

Cumberland put together a 24-9 spurt to start the second half behind 10 points from Ty Sean Powell, who finished with 16 points and 17 rebounds despite batting cramps most of the second half. Isaac Stephens added a layup and a tip-in and Andrew Rogan and Tranard Chester made 3-pointers during the stretch, giving CU a 61-45 advantage with 11:24 remaining in the contest.

Cam Horton started the comeback for the Running Eagles (14-8, 4-2) with a triple, three of his 14 points in the final eight-plus minutes. He added a layup and hit another three to cut the deficit to 72-62 with 4:25 to play.

A pair of turnovers and a missed layup by the Phoenix opened the door even more for Life, who connected on four foul shots to make it a six-point contest. Chester came up with two big plays to keep CU in front, picking up a loose ball saved by Stephens and converting that into a layup plus the foul. Then on the defensive end he blocked a 3-point attempt and got the rebound.

But a layup by Horton and two free throws from Life’s Jay Jay Simpson cut the margin to four with 88 seconds remaining. Deiontay Walters and Chester each made the front end of the 1-plus-1 but missed the second foul shot and Connor Gamble drilled a 3-pointer for the Running Eagles, making it 76-74 with 1:13 to play.

Life finally missed, a layup from Deven Dorsett and a tip-in from Demetrius Houston, and Denson calmly posted two free throws with 29.4 seconds remaining, extending the lead to five. Horton answered with a layup but Denson added two more foul shots with 22.5 seconds on the clock.

Gamble’s second triple in less than 60 seconds made it a two-point game, but Denson again made two free throws with 11.9 seconds remaining. Dorsett drilled a 3-pointer on the other end for Life with 3.1 seconds and Cumberland threw away a pass near midcourt, but Horton’s final heave before the buzzer hit the top of the backboard and the Phoenix survived, knocking off the No. 1 team in the conference and running its home winning streak to seven this season.

Stephens posted 13 points and 10 rebounds, his first double-double of the season, while Chester and Rogan each finished with 15 points and Denson collected 12 off the bench.

Dorsett led all scorers with 24 points, 15 in the first half, and Horton netted 23 off the bench along with seven rebounds. Gamble posted 10 points as well for Life.

The Running Eagles started quickly, with Dorsett scoring four points during a 9-1 run for a 15-8 Life advantage five minutes into the game. Baskets by Gamble and Taevon Ashmeade extended the lead to 19-10, as Cumberland posted one field goal in five-minute span.

Rogan’s 3-pointer and a basket by Denson got the Phoenix going again offensively and Denson added a layup. Chester’s 3-pointer from the left wing capped a 10-0 CU spurt, but Evan Milligan and Ashmeade netted field goals, giving the Running Eagles the lead again.

Horton’s 3-pointer from the corner plus the foul turned into a four-point play and a five-point edge for Life, but triples late in the half from Rogan and Chester cut the deficit to one. Rogan added another three and Powell’s layup in the final minute helped CU to a 37-36 edge to intermission.

Cumberland plays at the University of the Cumberlands on Saturday at 3 p.m. CT.