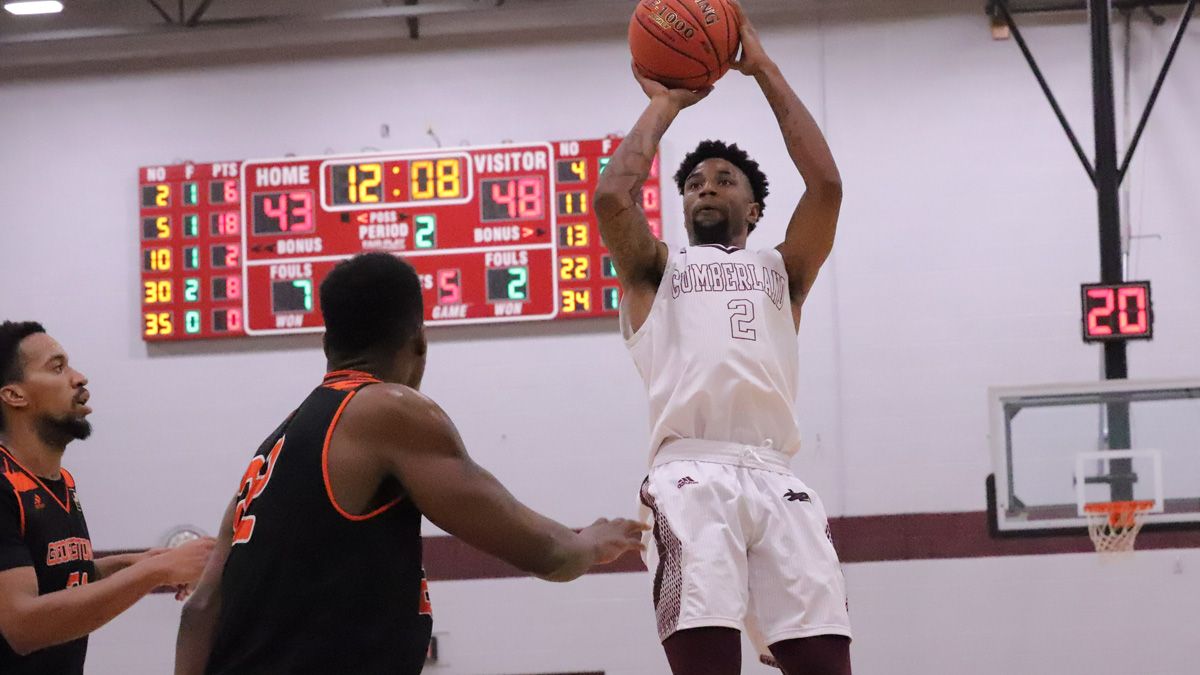 Tranard Chester posted 22 of his 24 points in the second half with four 3-pointers in CU's loss Saturday against Georgetown. (Credit Coy Gill)
#8 Georgetown College at Cumberland University | February 02, 2019

LEBANON, Tenn. – Tranard Chester netted 22 of his 24 points in the second half and Cumberland overcame an 11-point halftime deficit, but eighth-ranked Georgetown College scored the final six points of the game, all at the foul line in the last 28 seconds, in a 75-69 victory over the Phoenix in men’s basketball action here Saturday at Dallas Floyd Phoenix Arena.

Cumberland (9-10, 2-6 Mid-South) has lost three straight conference games with a lead or tied in the final 45 seconds, but execution inside of the final minute against cost the Phoenix a chance at victory.

Georgetown (21-3, 7-2) put together a 15-2 run in the first half and led 36-25 at the break, but Cumberland started the second period with a 14-5 spurt. Ty Sean Powell and Andrew Rogan each scored six points during the stretch, with Powell’s tip-in pulling the Phoenix within 41-39 with 15:07 remaining in the contest.

The Tigers answered with five straight points, including baskets by Troy Steward and Chris Coffey, but Cumberland came right back with an 11-2 run to take its first lead since early in the opening half.

Brandon Levier hit a pair of jumpers and Chester added a basket and then a 3-pointer for a 50-48 CU edge. From there the teams went back-and-forth, with five ties and five lead changes over the final 10 minutes of the contest.

Baskets by Dominique Reid and Coffey and a 3-pointer from Steward put the Tigers ahead, 57-52. Chester answered with one of his four triples and Shamari Denson’s two foul shots evened the contest at 57.

Georgetown kept pulling in front and Chester kept burying three’s in the final 10 minutes, with one at the 5:11 mark getting the Phoenix within a point and another with 1:58 remaining evening the game at 67.

Chester added a layup with 1:31 remaining for a two-point CU advantage, but Eljay Cowherd’s answered on the other end with a layup in traffic. Levier’s 18-footer with just under a minute to play gave the Tigers the ball and Cowherd was fouled some 25-feet from the basket on a holding call, sinking two foul shots for the lead with 27.5 seconds to play.

Cumberland threw the ball away on its next possession and Joe Burton made two free throws with 18.8 seconds remaining before a missed 3-pointer by Chester. Jacob Conway connected on the final two foul shots for the Tigers with 5.1 seconds to go.

Chester posted 24 points and nine rebounds on 10-for-18 shooting overall while Powell finished with 20 points and nine boards. Cumberland played the entire second half without freshman Isaac Stephens, who was injured late in the opening period.

Cowherd and Steward led Georgetown with 19 points apiece while Burton recorded 14 points and Coffey posted 11 points and 10 rebounds, five of those on the offensive glass, which led to 17 second-chance points for the Tigers.

The Phoenix jumped to an 8-2 advantage in the first three minutes of the contest thanks to two baskets from Powell and one each by Chester and Stephens. Burton made a mid-range jumper and then a 3-pointer for Georgetown and a Reid’s layup gave the Tigers the lead, 11-10.

Denson’s triple put CU ahead briefly, but Georgetown ran off a 9-2 spurt thanks to two field goals by Cowherd and a 3-pointer from Steward. The Tigers stretched the lead to 29-17 with triples by Cowherd and Steward, forcing a timeout by the Phoenix.

Powell’s basket at 3:49 ended an almost four-minute drought for Cumberland, but Georgetown continued to bury 3-pointers, with Steward drilling his third of the half. Field goals by Powell and Deiontay Walters cut the deficit to 36-25 at intermission.

Powell netted 10 points on 4-of-8 shooting but the rest of the Phoenix connected on just 7-for-24 from the field. Cowherd and Steward each collected eight points for the Tigers and Burton posted eight.

Cumberland travels to Shawnee State this Thursday at 7 p.m. Central Time before returning home next Saturday to face 16th-ranked University of Pikeville.